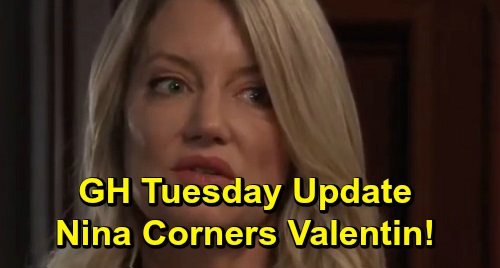 General Hospital (GH) spoilers update for Tuesday, October 15, teases that Diane Miller (Carolyn Hennesy) will struggle to get her client out of trouble. The FBI is playing hardball right now, so Sam McCall’s (Kelly Monaco) been arrested and ordered to await trial at Pentonville. Jason Morgan (Steve Burton) will find out soon enough. He’ll push Diane to fix this, but there may not be anything the hotshot attorney can do. Diana will insist Sam’s going to be transferred tonight, so it seems they’ll all just have to be patient.

Luckily, Jason won’t stand for this injustice. He’ll keep working on Peter August’s (Wes Ramsey) takedown and hope his mission gets Sam off the hook. In the meantime, Sonny Corinthos (Maurice Benard) will talk to his son. GH viewers know Sonny likes to visit Morgan Corinthos’ (Bryan Craig) grave – especially when something big happens within their family.

Now that the Corinthos clan is celebrating Donna Corinthos’ arrival, Sonny will want to fill Morgan in. He’ll also tell Morgan how much he misses him, so we should see some emotional moments. Carly Corinthos (Laura Wright) will face some of those on Tuesday as well. She’ll open up to Jasper “Jax” Jacks (Ingo Rademacher) about losing Morgan and how it wouldn’t have happened if she hadn’t gone back to Sonny.

However, Jax will probably encourage Carly to concentrate on what’s ahead. Carly still has so much to be grateful for, including precious Donna. Morgan wouldn’t want Carly to spend time stuck on what might’ve been. Once Carly gets a pep talk from Jax, she should feel better about things. Jax always knows just what to say!

Other General Hospital spoilers state that Dev Cerci (Ashton Arbab) will express interest in Josslyn Jacks (Eden McCoy). They recently had a close moment, so it’s clear that their relationship is progressing. They’re just friends right now, but it sounds like Dev will admit he’d like to be more.

Will Dev confess to Joss herself? Could he confide in Cameron Webber (William Lipton) or Trina Robinson (Sydney Mikayla) instead? Whatever the case, this is a tricky situation. Josslyn has been grieving over Oscar Nero Quartermaine (Garren Stitt), so pushing too hard could scare her off.

Across town, Peter August (Wes Ramsey) will get a warning from Liesl Obrecht (Kathleen Gati). It looks like Liesl will hurl a threat or two Peter’s way. Peter won’t be afraid of Liesl, but she’ll suggest that he should be. Dr. O can be a real menace sometimes! Since Nathan West (Ryan Paevey) isn’t around to look after Maxie Jones (Kirsten Storms) and James West, this may be Liesl’s effort to step up.

Next, Nina Reeves (Cynthia Watros) will want Valentin Cassadine (James Patrick Stuart) to tell her the truth. She’ll reveal Sasha Gilmore’s (Sofia Mattsson) story and wonder if it’s an accurate one. Nina will contend that if Valentin truly knew nothing about Sasha’s deception, she needs to hear him say it. It appears Nina will want to gaze in Valentin’s eyes and see if she can get some answers.

Liesl will get a helpful phone call later, so maybe Valentin will give her updates on Sasha’s protection. He may advise Liesl to skip Switzerland and take advantage of the opportunity they were given. Finally, Hamilton Finn (Michael Easton) will fret about the Hayden Barnes (Rebecca Budig) situation. He’ll tell Alexis Davis (Nancy Lee Grahn) that he knows Hayden’s lying, but he won’t be sure why.

Alexis will do her best to guide Finn, so she may speak from personal experience. She’s trying to focus on a potential future with Neil Byrne (Joe Flanigan) and leave Julian Jerome (William deVry) in the past. Alexis might suggest Finn should take a similar approach and focus on Anna Devane (Finola Hughes) instead of Hayden.

Of course, that’ll be difficult since Anna’s been gone for months. Finn will remain stuck on this Hayden mystery, which is good news for GH fans! General Hospital spoilers say the truth about “Fayden’s” daughter will be revealed eventually, so stay tuned. We’ll keep you posted as other details emerge. Stick with the ABC soap and don’t forget to check CDL often for the latest General Hospital spoilers, updates and news.