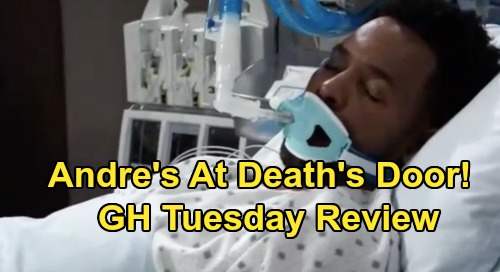 General Hospital (GH) spoilers review for Tuesday, September 3, reveals that Epiphany Johnson (Sonya Eddy) texted Jordan Ashford (Briana Nicole Henry) to come to the hospital urgently, and when Jordan arrived, Epiphany escorted her to the room of Dr. Andre Maddox (Anthony Montgomery), who was lying lifeless in a bed, hooked up to what appeared to be a ventilator.

Meanwhile, Hayden Barnes (Rebecca Budig) arranged a meeting between Jasper “Jax” Jacks (Ingo Rademacher) and Curtis Ashford (Donnell Turner) at Elizabeth Baldwin’s (Rebecca Herbst) house. But neither of the men particularly liked the idea of working with the other, and Jax nearly walked out, but soon it became established that Curtis isn’t working for Valentin Cassadine (James Patrick Stuart) any longer, and Jax softened to the idea of working with him.

Curtis then demanded to know what was going on, and so Hayden revealed that Mikkos Cassadine’s (John Colicos) will was not his final will – there’s a codicil – and that the rightful heir is eager to bring the matter to light. Curtis assumed that the rightful heir was Spencer Cassadine (Nicolas Bechtel), and neither Hayden nor Jax corrected him. Curtis wondered whether Valentin has known about the codicil all along, but that’s unknown at this point.

Curtis expressed concern for Nina Reeves (Cynthia Watros), thinking that if Valentin was lying about his rights to the Cassadine fortune, then she’d surely be hurt by that, and he said that he wanted her clued in now. Hayden was excited since it seemed like Curtis was agreeing to help them find the codicil, and finally both Curtis and Jax agreed for them all to work together on the plan, making Hayden very happy.

Curtis then trekked to GH and met Jordan in Andre’s room. The two conversed briefly and Curtis was surprised to see Andre in such grave condition. Curtis thought that perhaps Drew Cain (Billy Miller) could explain what happened, since Drew was on a mission to find Andre. But Jordan told Curtis that Andrew was alone – no Drew.

Of course, this is a huge development in the Franco Baldwin (Roger Howarth) storyline. As GH viewers know, Elizabeth’s current plan is to have Franco declared legally incompetent due to his cognitive impairment with having Drew’s memories. She then wants to have Andre try to reverse Dr. Arthur Cabot’s (Time Winters) memory mapping procedure so that Franco gets rid of Drew’s memories and regains his own. But now that Andre looks to be on death’s door, the chances of this happening aren’t looking good.

Speaking of Franco, he spent more time on Tuesday’s episode with Kim Nero (Tamara Braun). The two continued their conversation at Oscar’s Meadow, and Franco let it be known that he’s leaving Port Charles once he gets his ankle monitor off. But he wanted to hear more about Oscar Nero Quartermaine (Garren Stitt) first, so Kim recounted some stories about Oscar’s childhood.

were together. They talked about the great passion and fireworks they felt, and then one thing led to another and they passionately kissed.

Finally, Carly Corinthos (Laura Wright), who was revealed to have broken her foot off-screen, became worried when Gladys Corbin (Mel Harris) suddenly showed up at The Metro Court, allegedly for an impromptu visit with Mike Corbin (Max Gail). Of course, this is the woman who Sonny Corinthos (Maurice Benard) paid off to pretend to be Dev Cerci’s (Ashton Arbab) grandmother. Carly immediately texted Sonny to let him know that Gladys was there.

But before Sonny could show up, Jax, Josslyn Jacks (Eden McCoy), and Dev showed up together at the restaurant, and Gladys and Dev awkwardly pretended to be grandmother and grandson for appearances’ sake, while Mike sat there, totally confused. Finally, Sonny came along, and in a moment alone with Gladys told her menacingly not to even think about trying to renegotiate their deal.

Hopefully, Gladys isn’t thinking about revealing Dev’s forged documentation or anything of the sort, but there seems to be a big focus on Dev and his “identity” issues on GH right now. With him entering school in the next few days and getting a lot of questions about his background, it seems that TPTB are heading toward Dev being revealed as unrelated to Sonny, which would cause a huge problem for the Corinthos clan. Hopefully, Sonny can keep a lid on Gladys for now.