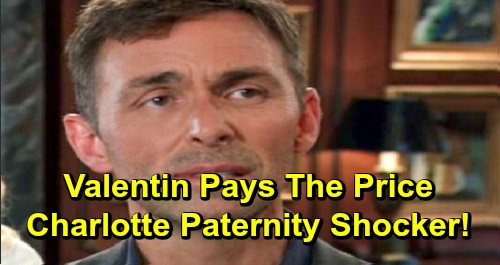 General Hospital (GH) spoilers tease that Valentin Cassadine’s (James Patrick Stuart) plan could cost him. GH fans know Valentin flew into a rage over what he viewed as Lulu Spencer’s (Emme Rylan) negligence. He blamed Lulu for Charlotte Cassadine’s (Scarlett Fernandez) decision to throw herself off the pier and into the icy water, but that wasn’t really Lulu’s fault.

Isn’t Charlotte supposed to be so advanced according to Valentin? This supposedly gifted kid did something reckless and not very bright. Lulu shouldn’t be held responsible for that. After all, Rocco Falconeri (O’Neill Monahan) stayed nice and dry! At Charlotte’s age and alleged skill level, she should’ve been able to go for a walk without sending her parents into a panic. Charlotte isn’t a toddler.

Nevertheless, Valentin was aghast when Lulu pointed out that Charlotte could be headstrong. He refused to let his daughter be blamed and even brought up the kidnapping at Kelly’s. Lulu frequents the restaurant with Charlotte, who would’ve been just fine if a vengeful international criminal – and Valentin’s former associate – hadn’t shown up to snatch her.

Valentin is so eager to blame everyone else and never has any blame for himself. His connection to Cassandra Pierce (Jessica Tuck) is the reason Charlotte was abducted night. Valentin’s child could’ve been killed because of HIM. Let’s not suggest Lulu at fault because she thought Charlotte was OK to do her homework at the counter. Perhaps she should’ve been keeping a closer eye on Charlotte, but Valentin was the one who brought the real danger.

In the episode that aired December 17, Valentin declared that he’d file for full custody. However, that could backfire if the judge sees things like we’ve described them. Valentin could be viewed as the true threat, and that could put his own custody rights in jeopardy.

Of course, those rights could be in jeopardy anyway based on the hints the show’s offered. General Hospital seems to be heading toward Valentin’s downfall. Between all the Claudette Beaulieu (Bree Williamson) talk and the rehashing of how Charlotte came to be, there’s a good chance Charlotte’s paternity will be changed.

Lulu could find herself with more power down the road. Charlotte adores her papa, but a paternity twist could be a game-changer. Lulu might want to create some distance between Charlotte and her possibly fake father. She could use this as an opportunity to break Charlotte free from Valentin’s web of deception. Lulu could certainly achieve that by denying or at least limiting visits.