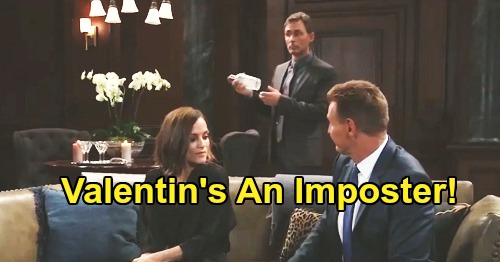 General Hospital (GH) spoilers reveal that Jasper “Jax” Jacks (Ingo Rademacher) is on a mission to find the codicil to Mikkos Cassadine’s (John Colicos) will. He wants to make sure the Cassadine estate gets back to the rightful heir, so this sets up some interesting drama. Could both the codicil and Valentin Cassadine (James Patrick Stuart) be frauds?

Jax and Hayden Barnes (Rebecca Budig) recently discussed Mikkos’ codicil, which GH fans will recall stated that the Cassadine estate would go to the oldest surviving son. Mikkos was supposed to not have told Helena Cassadine (Constance Towers) about the revision because he didn’t want the estate going to Stavros Cassadine (last played by Robert Kelker Kelly). Valentin later claimed he found the codicil in Greece after Helena’s death.

Of course, Jax involved Hayden in this is because she was Nikolas Cassadine’s (last played by Nick Stabile) widow and is familiar with the layout of Wyndemere. Plus, she has the skillset to be the Chief Financial Officer of the Aurora Print Division. Jax recently bought that division from Drew Cain (Billy Miller), so he had an easy spot for Hayden to slide into. It’s a good cover for what they’re actually doing.

Jax mentioned that he had to get into the trophy room and look for the codicil of Mikkos’ will. They also talked about how Valentin would lose everything, and Jax felt bad that Nina Reeves (Cynthia Watros) would lose everything right along with him. It’s clear that some major bombshells are brewing here.

Who Is The Rightful Heir To the Cassadine Fortune?

So why does Jax think finding the codicil will help get the Cassadine estate back to its rightful heir? Who is that rightful heir? General Hospital has offered many hints that Nikolas is still alive, but things could get tricky due to that oldest surviving son stipulation. Nikolas and Valentin’s birth dates have been revised several times, but Valentin is still older than Nik. The estate wouldn’t automatically revert back to Nikolas, even if he’s not dead.

Jax also has a file on Cassandra Pierce (Jessica Tuck). GH fans will remember Cassandra was spotted with a male hand on her knee when she was leaving the Canadian clinic. That hand was sporting a Cassadine family ring. Cassandra has also been spotted on surveillance cameras talking to an unidentified man, so many viewers assume that’s Nikolas.

However, Jax’s file may have much less to do with Nik and much more to do with Valentin! Cassandra has known Valentin for a long time and worked with him when he was a mercenary. They were also lovers back then. Cassandra may have a secret about Valentin that Jax needs; namely, that Valentin may not be Valentin at all! Could he be an imposter?

Fisherman Theo Hart had a Cassadine crest tattoo on his wrist in 2016, but anyone can get one of those. During the time period when Nikolas presumably fell to his death after Valentin shot him, Lulu Spencer (Emme Rylan) had tried to escape through the tunnels on Cassadine Island. She was frightened when she realized a skeleton dressed up like her father Luke Spencer (Anthony Geary) really was her father, but he was later proven to her to be alive and well.

Valentin Cassadine Arrived With A Book About His Family Tree

Viewers will also recall that when Valentin first came to Wyndemere after Nikolas’ presumed death and claimed the estate, he had a thick book containing the Cassadine family tree. An imposter seeking to pose as an heir would find that helpful.

If Nikolas is truly alive as expected, he might’ve run into Jax somewhere. Perhaps it was decided that it wasn’t in Nik’s best interest to come back to Port Charles until the Cassadine imposter was dethroned. This would be a way to make Nikolas the rightful heir and take Valentin down, so it’s an option worth considering.