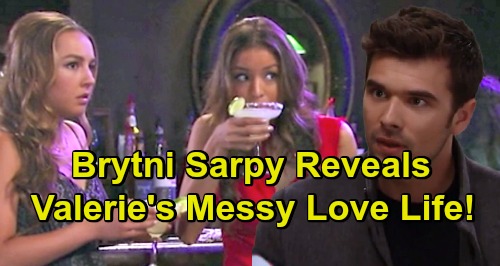 General Hospital (GH) spoilers tease that Valerie Spencer (Brytni Sarpy) will continue to avoid her complicated feelings. She was caught off guard by that kiss with Kristina Corinthos-Davis (Lexi Ainsworth), but she was certainly a willing participant. Now things are awkward between Valerie and Kristina, but they’ll keep sidestepping the issue and letting their friendship grow increasingly strained.

In an interview with Soap Opera Digest, Brytni Sarpy discussed that pivotal lip lock and what Valerie’s going through. She also weighed in on the social media buzz that kiss created. Sarpy said, “I mean, it’s about damn time, right? I think it’s cool. We’ve played with that storyline, or the idea of that storyline, for a year now, so it’s nice that…we are able to figure out what is going on with that.”

Sarpy admitted she isn’t sure how Valerie really feels about the kiss, Kristina or anything else. Valerie is just confused and needs time to sort through her jumbled thoughts. Sarpy suggested that Valerie is shutting down a bit when it comes to exploring her sexuality. Fear is getting in the way, so it could be a while before Sarpy settles on a firm path for herself.

Of course, Kristina’s kicking herself for crossing the line and screwing up her favorite friendship. New Year’s Eve showcased the painful distance between Valerie and Kristina. General Hospital spoilers say things are probably going to get worse before they get better.

Sarpy noted that there’s a good reason for Valerie’s decision to put space between them. It all comes down to her not wanting to confront how her feels or what she wants. “I think she thinks if she avoids Kristina, she won’t have to deal with any of that,” Sarpy said.

Kristina would seemingly like enjoy a romance with Valerie and deep down, Valerie would probably like that, too. That’ll probably be something GH explores eventually, but Kristina could have some competition for Valerie’s heart. Harrison Chase (Josh Swickard) is currently interested in Willow Tait (Katelyn MacMullen), but what happens if he ultimately loses her to Michael Corinthos (Chad Duell)?

Valerie hinted at being attracted to Chase, but she shut down the idea since he’s her partner and is obviously smitten with Willow. That doesn’t mean something Chase and Valerie will never get together. Sarpy pointed out that she thinks Josh Swickard is “a cool guy” and would be open to pursuing a spark for their characters. “I think that would be fun to explore,” Sarpy said.

It sounds like General Hospital has some interesting developments in store for Valerie. What direction would you like to see Valerie’s love life go in? We’ll give you updates as other GH news comes in. Stay tuned to the ABC soap and don’t forget to check CDL often for the latest General Hospital spoilers, updates and news.