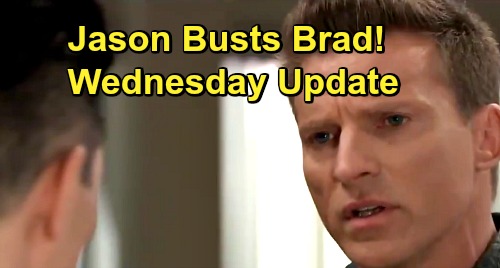 General Hospital (GH) spoilers for Wednesday, April 17, tease that Margaux Dawson (Elizabeth Hendrickson) will spar with Sonny Corinthos (Maurice Benard). She’ll suspect that he’s hiding something, but Sonny certainly won’t tip Margaux off to Kristina Corinthos-Davis’ (Lexi Ainsworth) kidnapping or location. There’s far too much at stake for Sonny to let anything slip out.

Of course, Sonny won’t agree with Margaux’s involvement in DoD and might say so. That could lead to the sparring we mentioned, but these two will just have to deal with the tension for now. At the Dawn of Day community house, Shiloh Archer (Coby Ryan McLaughlin) will form a sneaky plan. He’ll tell Sam McCall (Kelly Monaco) that they have something Jason Morgan (Steve Burton) never counted on.

Shiloh will make Sam the star of his secret scheme, so he probably thinks she’s the threat Jason won’t see coming. Little does Shiloh know Sam is in cahoots with Jason. On Wednesday, she’ll keep pretending she’s out of the loop on Jason’s plot and convince Shiloh she’s loyal to only him.

Other General Hospital spoilers say Jason will have a startling realization. When he learns Brad Cooper (Parry Shen) is now part of DoD, things will suddenly click into place. Jason will connect the dots and determine that the drugged cup never even got tested. He’ll guess that Shiloh must’ve told Brad not to, and Brad must’ve listened like a duped follower should.

Over with Willow Tait (Katelyn MacMullen), she’ll be on the hot seat as Michael Corinthos (Chad Duell) asks questions. He’ll wonder if Willow knows anything about her baby’s adoptive family. Willow may be wary of divulging too many details here. The more Willow reveals, the greater the danger to “Wiley Cooper-Jones.”

Willow might keep quiet about Brad and Lucas Jones (Ryan Carnes) adopting her kid for now. However, it shouldn’t be too hard for Michael to figure this out. Willow’s always on edge whenever she’s around Brad and tends to look at “Wiley” longingly. If she tries to hide that part of the story, the truth’s still going to come out sooner or later.

To make matters even more complicated, Willow has no clue that her child is dead and was replaced by Jonah Corinthos – Michael’s very own son. While we wait on that bomb to drop, we’ll also be waiting on Dr. Hamilton Finn’s (Michael Easton) engagement to Anna Devane (Finola Hughes). Despite Finn’s carefully rehearsed proposal, he just can’t seem to find the ideal moment to give it.

Harrison Chase (Josh Swickard) will pay his brother a visit with some Champagne for a toast. Unfortunately, there’s nothing to celebrate just yet. Finn will fill Chase in and get some support, so it’s nice that these two are still growing closer.

Other GH spoilers state that Franco Baldwin (Roger Howarth) will catch Nina Reeves (Michelle Stafford) off guard. He’ll burst in Crimson on a mission to help Aiden Webber (Jason David). The kids can still be awfully cruel at school, so Franco will hope to make Aiden feel included. He’ll think Charlotte Cassadine (Scarlett Fernandez) may be able to pitch in on that.

Franco will push Nina to have a chat with her almost stepdaughter. He’ll think if Charlotte takes an interest in Aiden, her classmates might as well. Charlotte is a popular girl, but Nina may argue that she doesn’t have that much influence. She can’t control who the other children target, so Franco may be out of luck.