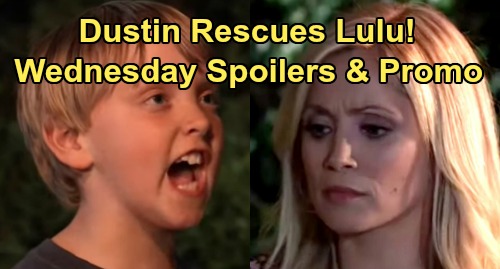 General Hospital (GH) spoilers for Wednesday, August 28, tease that Curtis Ashford (Donnell Turner) will get an earful from Jordan Ashford (Briana Nicole Henry). She’ll rant at Curtis for bordering on corporate espionage, but Curtis will offer reassurance. He won’t want Jordan to worry, but that’s kind of tough when Curtis is mixed up in Valentin Cassadine’s (James Patrick Stuart) drama.

Over with Lulu Spencer (Emme Rylan), she’ll tackle a single parent challenge. Rocco Falconeri (O’Neill Monahan) will want to quit some activity – perhaps one he used to love before Dante Falconeri (Dominic Zamprogna) left the picture. Lulu will insist her son should stick with it, but Rocco will lash out. He won’t think it’s fair that his dad can quit, but not him.

Fortunately, Dustin Phillips (Mark Lawson) may be able to help Lulu out. He’ll come to the rescue on this GH episode, so it makes sense that he’ll pitch in and bond with the kid. Seeing how great Dustin is with Rocco should make Lulu like him even more.

Other General Hospital spoilers say Elizabeth Baldwin (Rebecca Herbst) will have a tough conversation with Franco Baldwin (Roger Howarth). Liz will insist she loves her husband, but Franco won’t look very moved. There’s no emotional connection here, so it seems he just stopped by to let Liz down gently.

At GH, Cameron Webber (William Lipton) will have a chat with Jason Morgan (Steve Burton). He’ll think Jason knows what it’s like, so he may mean to be in Franco’s shoes. Jason opened up to Sam McCall (Kelly Monaco) about his brain injury recently. He never wanted to be forced back into who he used to be, so he can definitely relate to what Franco’s going through.

Next, General Hospital spoilers say Jason will meet with Monica Quartermaine. They’ll have a difficult discussion, so it’s possible Cam will get Jason reflecting on that time in his life again. He may decide to confide in Monica. There’s also a chance we’ll hear some tragic Drew Cain (Billy Miller) developments, but it appears GH may hold off on those for a bit.

Meanwhile, Nina Reeves (Cynthia Watros) will lose it on Jasper “Jax” Jacks (Ingo Rademacher). She’ll yell that Jax has been lying to her since he walked through the door. Nina may demand some answers since Jax got caught with a Cassandra Pierce (Jessica Tuck) file. Now that all this Cassandra chaos has put Sasha Gilmore’s (Sofia Mattsson) life at risk, Nina’s going to want the truth for once.

Of course, Jax won’t give up the full story! He’ll be careful about what he spills to Nina, but he’ll truly hope things work out for Sasha. At home, Sonny Corinthos (Maurice Benard) will get a visit from Michael Corinthos (Chad Duell). He’ll fill Sonny in on the “Sandy Lance” selfie and indicate that Cassandra wanted Nina to know it was payback.

Sonny and Michael will eventually rush over to the police station, so maybe they’ll think of something that could help the investigation. If not, they’ll at least want to know what the cops are doing to find Cassandra. Finally, Mac Scorpio (John J. York) will get an offer from Jordan. She may want him to remain at the PCPD either as the police commissioner or in a different position.