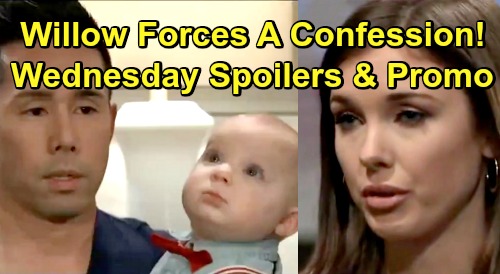 General Hospital (GH) spoilers for Wednesday, February 13, reveal that Kristina Corinthos-Davis (Lexi Ainsworth) will make a pitch to her mother. During their next chat, Kristina will encourage Alexis Davis (Nancy Lee Grahn) to come back for a second Dawn of Day seminar. She’ll think Alexis threw in the towel too soon and should give it another try.

Alexis actually found that seminar helpful in a way, but she’ll probably have no intention of attending one again. She may mention her new therapist, Dr. Neil Byrne (Joe Flanigan), to Kristina and argue that they’ve got it covered. Alexis intends to work through her issues on her own, so it seems Kristina will just have to drop the matter.

Meanwhile, Jason Morgan (Steve Burton) will show up at the DOD house. He’ll appear to be agitated as he approaches Shiloh. Jason will note that Shiloh said to come to him if he had questions, so he’s ready to ask some. General Hospital spoilers say Shiloh will be put on the hot seat, but he’ll undoubtedly play it cool. GH fans know Shiloh is a master manipulator, so he can handle the pressure.

Sam McCall (Kelly Monaco) will also keep up her single charade in Wednesday’s episode. She’ll make it clear that she’s not with Jason as the Valentine’s Day party kicks off. Sam will pretend Jason is a friend and nothing more, so her scheme should start paying off soon enough.

Across town, Harrison Chase (Josh Swickard) will spot Michael Corinthos (Chad Duell) and tease him a bit. Chase will wonder if someone made Michael a valentine. Unfortunately, someone did and that someone is probably Nelle Benson (Chloe Lanier). The queen of creepy will strike again by reaching out to Michael on Wednesday, so a cryptic Valentine’s Day card certainly fits her style.

Elsewhere, Willow will leave Brad Cooper (Parry Shen) in a tight spot. She’ll get close to him while he’s holding “Wiley” Cooper-Jones, which will leave Brad highly uncomfortable. Willow will eventually realize Brad must know who she is. She’ll push him to admit it, but will he come clean about that? Will Brad confess that he knows Willow is Wiley’s birth mom?

Either way, Brad’s trouble is getting worse by the second. Speaking of trouble, Anna Devane (Finola Hughes) will make some when she tags along on Robert Scorpio’s (Tristan Rogers) mission with Dr. Hamilton Finn (Michael Easton). Since Dr. Cabot could recognize Anna and clam up, Robert won’t think it’s a good idea for her to be involved.

Robert will insist that Anna’s going to blow everything, but she knows what she’s doing. Perhaps Anna will intend to hang back while Finn and Robert handle the actual grilling session. Then again, Anna may just want to tackle the situation head-on.

Whatever the case, General Hospital viewers won’t want to miss Wednesday’s exciting scenes. We’ll give you updates as other GH news comes in. Stay tuned to the ABC soap and don’t forget to check CDL often for the latest General Hospital spoilers, updates and news.