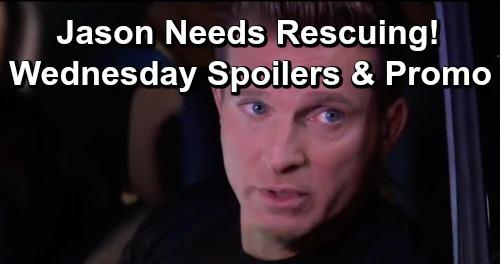 General Hospital (GH) spoilers for Wednesday, June 26, tease that Curtis Ashford (Donnell Turner) will have some big news for Sam McCall (Kelly Monaco). He’ll let her know he’s dissolving their partnership. Curtis accepted the job at Aurora Media as part of a long con he’s running for Valentin Cassadine (James Patrick Stuart). He intends to keep tabs on Jasper “Jax” Jacks (Ingo Rademacher) and this job will help him do it.

However, that means Curtis won’t have time to crack cases with Sam anymore. Of course, it’s not like Sam’s had much time for that either lately. They may agree that circumstances have changed and they both have different priorities. There certainly won’t be any hard feelings between these partners.

Other General Hospital spoilers say Kim Nero (Tamara Braun) will drop the baby bomb on Drew Cain (Billy Miller). She just surprised Drew with a kiss, so she’s finally getting to the reason for this date-ish meeting. Kim will insist she wants to have a baby…THEIR baby. She’ll think they can keep Oscar Nero Quartermaine’s (Garren Stitt) memory alive by giving him a little brother or sister.

Unfortunately, Kim’s setting herself for more disappointment. Drew won’t grant her shocking request, so she’ll have to pursue other options. At GH, Lucas Jones (Ryan Carnes) will want to talk about the results of Bobbie Spencer’s (Jacklyn Zeman) blood test. Bobbie tried to downplay her symptoms, but Lucas fears she may have diabetes. He’ll force Bobbie to examine the results and tackle the issue if this is indeed what she’s facing.

At Charlie’s Pub, Alexis Davis (Nancy Lee Grahn) will rip into Julian Jerome (William deVry). She’ll insist Julian’s just given Shiloh Archer (Coby ryan McLaughlin) ammunition to blow his family apart. Like Bobbie, Alexis will worry those missing adoption records are going to spell trouble. Julian’s actions could come back to haunt him if the judge suspects Lucas, Brad Cooper (Parry Shen) or any shady family member did this.

Meanwhile, Shiloh will rant at his attorney. He’ll fly into a rage over Willow Tait’s (Katelyn MacMullen) refusal to divulge any information. Willow was held in contempt of court, which was satisfying to Shiloh. Even so, that doesn’t tell Shiloh what he really wants to know.

General Hospital spoilers say Shiloh will lash out and contend that Willow’s the one who broke the law. He’ll refuse to let Willow get away with it. Shiloh’s lawyer will calmly ask if he wants to hear what she has to say or not. She’s not one of his gullible DoD followers who can be pushed around. This tough attorney will let Shiloh know how she intends to fight for his rights next.

In Beechers Corners, Jason Morgan (Steve Burton) will remain in a tight spot. He was just about to bolt with Carol Lockhart, who had to have her ankle monitor removed. As Carol hides out of sight, Jason will tell the cop who approached that he’d like to be on his way. It won’t be that easy for Jason, but Michael Corinthos (Chad Duell) will save the day later this week.

General Hospital fans won’t want to miss all the drama ahead. We’ll give you updates as other GH details emerge. Stay tuned to the ABC soap and don’t forget to check General Hospital spoilers, updates and news.