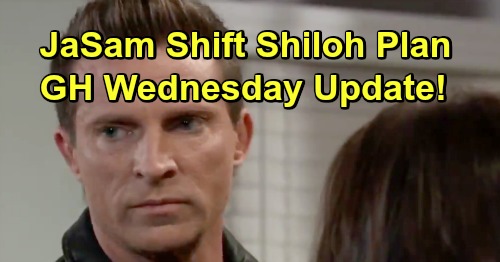 General Hospital (GH) spoilers update for Wednesday, March 20, tease that Dante Falconeri (Dominic Zamprogna) will offer an explanation. As he stands by Sonny Corinthos’ (Maurice Benard) cell, Dante will explain that he had no choice. He’ll argue that Sonny wasn’t going to cooperate, so he had to kill his father.

Fortunately, Sonny will just be faking it in hopes of getting home. He’ll run into some obstacles along with Dante, but maybe Robert Scorpio (Tristan Rogers) can pitch in. General Hospital spoilers say Robert will search for Sonny on Wednesday, so he may catch up with the guys at some point.

Meanwhile, Olivia Falconeri (Lisa LoCicero) will battle confusion. She’ll start asking questions about Sonny, so Carly Corinthos (Laura Wright) will try to dodge them. Nevertheless, Carly’s response will tip Olivia off to trouble. Olivia will figure out that Sonny took off without warning, so she’ll be pretty miffed about it. Since Sonny went to find Dante, that’s something Olivia would’ve wanted to be in the loop on.

General Hospital spoilers say Carly will offer reassurance, but she’ll be worried deep down. Carly will just have to count on Sonny to come back to her. She’s got a baby on the way, so that’ll certainly heighten her fears. Speaking of fears, Sam McCall (Kelly Monaco) will deal with more of them. She’ll feel like Shiloh Archer’s (Coby Ryan McLaughlin) threat is getting worse, so she’ll want to take action.

Jason Morgan (Steve Burton) will listen to Sam’s concerns and vow to help. They’ll settle on a new strategy to save Kristina Corinthos-Davis (Lexi Ainsworth) ASAP. Sadly, Kristina will fall deeper and deeper into Dawn of Day. She’ll acknowledge the next step Shiloh mentioned and insist she’s ready to take it. Kristina would do just about anything to earn Shiloh’s approval.

Shiloh may push Kristina to get a tattoo soon. He apparently puts that stamp on the women he considers his personal property, so it’s a problem if one of those women chooses to leave DoD. That’s exactly what Willow Tait (Katelyn MacMullen) did, which means she could be in grave danger. Shiloh is likely Willow’s “baby daddy,” so that adds another layer of drama.

General Hospital spoilers state that Harrison Chase (Josh Swickard) will surprise Willow on Wednesday. He’ll bring up the idea of a weekend getaway and hope she’s into it. Willow will seem keen on taking a trip with Chase, but there’s a chance a run-in with Shiloh could throw things off.

GH fans can expect Willow to experience total terror, so spotting Shiloh could certainly do that. She’ll make an impulsive decision later this week, so Willow may be tempted to flee Port Charles. Chase or even Shiloh may stop her before she has the opportunity, but Willow will definitely be on edge.

Until then, Anna Devane (Finola Hughes) will finally get Alex Devane (Finola Hughes) to crack. General Hospital spoilers say Alex will recap memories that Anna’s mistaken about and score her surgery in return. However, Anna will know that Alex is holding out on her. Once Alex’s blindness is cured, she’ll be shipped off to the WSB.

Alex won’t be happy her sister’s broken promise, so she’ll try to stir the pot by revealing one last memory hint. This is most likely building to the revelation that Peter August (Wes Ramsey) is actually Alex’s son, so stay tuned for that shocker down the road. We’ll give you updates as other GH news comes in. Stick with the ABC soap and don’t forget to CDL often for the latest General Hospital spoilers, updates and news.