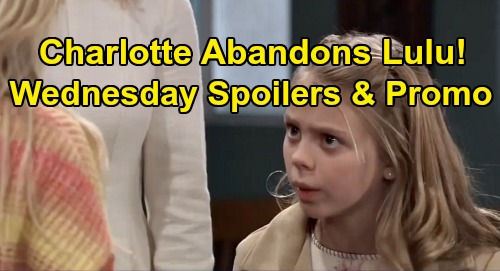 General Hospital (GH) spoilers for Wednesday, November 13, tease that some hot drama’s coming up. We should note that all four soaps are set to be preempted for coverage of the impeachment hearings, so it seems likely Wednesday’s show will actually air Thursday, November 14. Now let’s get to that drama we mentioned!

For starters, Ava Jerome (Maura West) won’t be in the mood for visitors, but Sonny Corinthos (Maurice Benard) will believe he can change her mind. He’ll stop by Shadybrook with Avery Corinthos (Ava and Grace Scarola) and suggest he thinks Ava can make an exception for this one.

Ava’s spirits should be lifted by her upcoming chat with Avery, but soon it’ll be time to talk about what’s next. Sonny and Ava will privately discuss Avery’s well-being and how Ava’s stint at Shadybrook fits into that. They’ll hopefully get on the same page about Ava’s role in Avery’s life and what the future holds.

Other General Hospital spoilers say Josslyn Jacks (Eden McCoy) will pitch an idea to her mom. She’ll sit down with Carly Corinthos (Laura Wright) and insist this might be a good time to finish their conversation. Josslyn may bring up the idea of moving in with Jasper “Jax” Jacks (Ingo Rademacher) again, but Carly certainly can’t let that happen. She’s aware of Nikolas Cassadine’s (Marcus Coloma) survival now, so she’ll want to shield Josslyn from trouble.

Over with Charlotte Cassadine (Scarlett Fernandez), she’ll lash out at Lulu Spencer (Emme Rylan). GH fans know Charlotte is safe after a traumatic ordeal with her kidnapper, Cassandra Pierce (Jessica Tuck). A relieved Lulu will be eager to take her daughter home, but Charlotte will refuse to go with her.

Charlotte will undoubtedly want to spend the night with Nina Reeves (Cynthia Watros) and Valentin Cassadine (James Patrick Stuart) instead. That should sting for Lulu, who knows Charlotte wasn’t happy about the derailed “Valentina” wedding. While Lulu deals with an angry Charlotte, Robert Scorpio (Tristan Rogers) will catch up with Anna Devane (Finola Hughes). Since Robert is in the loop on Hamilton Finn’s (Michael Easton) and Hayden Barnes’ (Rebecca Budig) little girl, this could get interesting!

Robert will declare that there’s something Anna needs to know, but it doesn’t look like he’ll actually drop the daughter bomb. Instead, Anna should walk in on “Fayden” bonding without a clue about Violet Barnes (Jophielle Love). Finn plans to tell Violet he’s her father in the morning and have breakfast as a fam, so it’s clear that things are getting cozy here.

Before Anna arrives, Hayden will suggest that Finn should just say the word and he can back out now. Based on her facial expression and tone, it appears Hayden will just be joking. Finn will smile, so maybe he’ll just be marveling at what a handful Violet can be when she’s rested and full of energy. Regardless, Finn is loving every second of fatherhood so far and definitely wants to be there for sweet Violet.

There’s a good chance Anna will walk in for this episode’s cliffhanger, so that should be quite a shocker. Meanwhile, Nikolas will test Jax’s patience once again. General Hospital spoilers say Jax will be close to blowing Nikolas’ cover, but he’ll ultimately keep his mouth shut and try to ride this out. Even so, Jax will put major pressure on Nikolas and hope they can wrap this scheme up ASAP.

It sounds like some exciting scenes are on the way. We’ll give you updates as other GH news comes in. Stay tuned to the ABC soap and don’t forget to check CDL often for the latest General Hospital spoilers, updates and news.