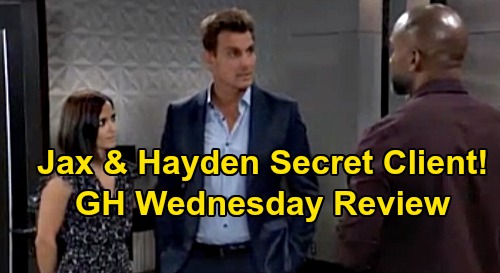 General Hospital (GH) spoilers review for Wednesday, September 11, tease that Jasper “Jax” Jacks (Ingo Rademacher), Curtis Ashford (Donnell Turner), and Hayden Barnes (Rebecca Budig) met to kick off their collaboration to track down the codicil to Mikkos Cassadine’s (John Colicos) will. As GH viewers will remember, Jax and Hayden believe that Helena Cassadine (Constance Towers) hid the codicil somewhere on a Cassadine property, and they want to thoroughly search Wyndemere for it.

But that leaves them with a problem, since Valentin Cassadine (James Patrick Stuart) and Nina Reeves (Cynthia Watros) are currently living at Wyndemere, and that makes it nearly impossible for Jax and Hayden to search the place. They’re hoping Curtis can help with the endeavor, but they’re hesitant to tell Curtis who the rightful heir named in Mikkos’ codicil is. Clearly, they want to keep that person’s identity a secret.

And for the time being, Jax and Hayden have lucked out because Curtis is assuming that it’s Spencer Cassadine (Nicolas Bechtel) who is the heir. On Wednesday’s episode, Curtis asked Jax and Hayden point blank how Spencer found out about the codicil, and Jax smoothly put him off, telling him to “let us worry about our partner.” That seemed to placate Curtis for the time being, but we doubt that Jax and Hayden will be able to keep their partner a secret for long.

Right now, GH buzz is that their partner could be Nikolas Cassadine (Tyler Christopher), and there’s been lot of speculation about whether we’ll soon see Nikolas back on canvas. But for the time being, GH viewers will have to wait and follow the clues on the show as they unfold.

Anyway, after Hayden left the meeting, Curtis and Jax spoke privately, and Jax expressed concern that perhaps Curtis wasn’t up to the mission, given what seems to have happened to his good friend Drew Cain (Billy Miller). As GH viewers know, Drew’s private jet crashed under mysterious circumstances in route to Afghanistan. But Curtis insisted that he was all right, and that he still believes that Drew could be alive and well.

Jax also questioned whether Curtis’ friendship with Nina would be able to survive this mission against Valentin – after all, if they succeed in finding Mikkos’ codicil and a new heir is named, then Valentin would lose the Cassadine fortune. Curtis acknowledged that Nina could get hurt, but that she’d ultimately be better off without Valentin, and besides, she didn’t need his money anyway.

At any rate, Jax and Curtis ended their meeting by deciding that they needed an expert on Helena, and Curtis knew right where to go. Later, he arrived at Charlie’s Pub to track down Laura Collins (Genie Francis), whom he knows has the inside scoop on Helena. He promptly asked Laura to tell him everything she knows about Helena, which really came out of the blue for Laura. Ongoing spoilers say that Laura will spill what she knows, along with a warning or two about the dangerous family matriarch.

Of course, we should note that Curtis going to Laura for information about this case might not be something that Hayden and Jax will be comfortable with, especially if the rightful heir does end up being Laura’s son Nikolas. Assuming that’s the case, though, Curtis has no idea – remember that he’s under the assumption that the rightful heir is Spencer. If Laura starts wondering what’s going on with Curtis’ investigation and questions about Helena, it could end up being a real mess for Jax and Hayden.