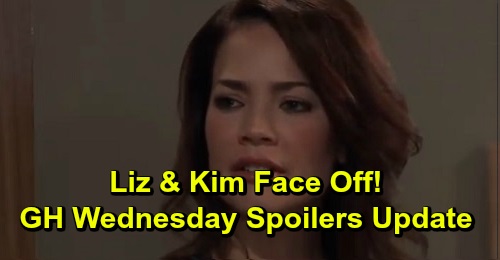 General Hospital (GH) spoilers update for Wednesday, September 18, teases that Jason Morgan (Steve Burton) will battle confusion. He’ll talk to Sonny Corinthos (Maurice Benard) about what something means, but they won’t have the answers. This may be where Damian Spinelli (Bradford Anderson) comes in. He’s set to make an appearance this week, so Jason may call on his trusted friend to solve the puzzle.

Whether this is related to missing Drew Cain (Billy Miller) or perhaps Shiloh Archer (Coby Ryan McLaughlin), Jason and Spinelli should get to the bottom of it. In the meantime, Shiloh will make a call that could prove crucial to his freedom. He’ll phone someone with important info, so maybe he’ll score a meeting and get more help.

Of course, Peter August (Wes Ramsey) will still have to deal with Shiloh’s threat. He’s promised to help Shiloh, but he’ll have other matters to contend with, too. On Wednesday, General Hospital spoilers say Peter will sneak down to the docks. He’ll meet up with a minion to deliver orders, but it looks like those orders will change.

Peter will suggest the previous plan was too risky, which could mean trying to kill Andre Maddox (Anthony Montgomery). He may think they’d be better off preventing the memory reversal another way. Naturally, Franco Baldwin (Roger Howarth) has a target on his back as well. Peter doesn’t want Franco to get the procedure and potentially have his Drew memories intensify.

While Peter works on a strategy to handle his problems, Cameron Webber (William Lipton) will face a problem of his own. He’ll still be dealing with guilt over Franco’s dilemma and the pain it’s caused Elizabeth Baldwin (Rebecca Herbst). Cam hates that Franco’s in this jam because he traded places with him. Furthermore, Cameron feels bad about ever rejecting Franco.

In Wednesday’s episode, Cam will seem gloomy as he notes he got what he wanted. He succeeded in pushing Franco away – although that’s definitely not what Cameron wants now. Cam would give anything to have the real Franco back home where he belongs. He just wants to put the “Friz” family back together, but that’s not possible right now.

Thankfully, Josslyn Jacks (Eden McCoy) will give Cameron plenty of support. She can’t fix Cam’s issues, but she can let him know he’s not alone. Over at Kim Nero’s (Tamara Braun) apartment, she certainly hasn’t been alone either. Kim just hooked up with Franco, so it shouldn’t be too hard for Liz to figure that out.

Liz will push for a confrontation, but Kim won’t feel like it’s the right time. However, there’s no time like the present – especially when you just slept with your good friend’s husband! Liz will be upset over this betrayal and she has every right to be. Kim deserves a fierce outburst for going behind Liz’s back and succumbing to temptation.

Other GH spoilers say Dustin Phillips (Mark Lawson) will seek another date. He had a great time with Lulu Spencer (Emme Rylan) despite their little interruption. It was awkward when Laura Webber (Genie Francis) and Curtis Ashford (Donnell Turner) barged in, but Dustin won’t want to dwell on that. It appears he’ll call Lulu up in hopes of nailing down some plans for the weekend.

Lulu will get a bit nervous over the idea, so we’ll see if she calms down and accepts the invitation. As for Maxie Jones (Kirsten Storms), she’ll want the inside scoop on Dustin and Lulu’s romance. Maxie will want every last detail, so she’s in for a shock when she hears about Lulu’s encounter with her mom!