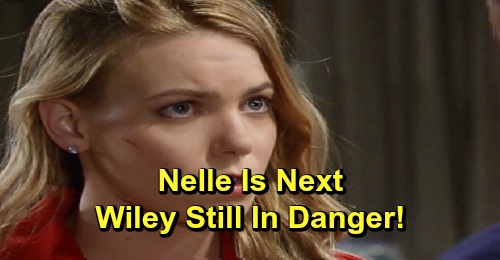 General Hospital (GH) spoilers tease that Shiloh Archer’s (Coby Ryan McLaughlin) exit story is underway, and it’s bringing plenty of Port Charles drama. Thankfully, Jason Morgan (Steve Burton) will rescue Sam McCall (Kelly Monaco) as usual. “Wiley Cooper-Jones” will be saved as well, but what about Brad Cooper’s (Parry Shen) huge secret? Will the truth come out? It looks like a version of it will, but the biggest bomb may wait until later.

GH fans know the real Wiley died the night he came home from the hospital. Brad was devastated and even more devastated at the thought of telling Lucas Jones (Ryan Carnes). They were thrilled about starting their family, so Brad hated to yank it all away in a heartbreaking instant.

Of course, Nelle Benson (Chloe Lanier) came along with a tantalizing offer. She convinced Brad to swap his dead baby for Jonah Corinthos, which set off a chain reaction that’s still exploding over a year later. GH viewers are eager for Michael Corinthos (Chad Duell) to find out his son’s alive, but that may not happen just yet.

On September 30, General Hospital spoilers say Nelle will get some news that pleases her. Now we have to think about the wording of this along with Nelle’s goal from the beginning. Nelle’s always been desperate to keep her child as far away from the Corinthos clan as possible. If Michael and his family end up with Jonah, they’ll “win” in her mind.

The whole truth would lead to a reunion and that news certainly wouldn’t please Nelle! It’s possible Brad will repeat the original story he told Julian Jerome (William deVry), which is that he traded babies with a random woman. Regardless, it doesn’t look like Michael will know Jonah survived based on Nelle’s reaction. She may hear about this kidnapping mayhem and be glad it didn’t derail her main plan.

Naturally, this could set up another “Wiley” snatching! Will Nelle be the one to strike next? General Hospital spoilers suggest Nelle and Ryan Chamberlain (Jon Lindstrom) will continue to bond behind bars. They’d both like to make their great escape, so they seem poised to team up and make it happen.

Will Nelle think she can succeed where Shiloh failed? Will she plot to run away with her son and never look back? Perhaps Nelle herself will blow this secret wide open. After all, Brad won’t be able to hide the whole story if Nelle herself takes the kid and runs.

It sounds like the “Wiley” chaos will head up just in time for November sweeps. We’ll give you updates as other GH details emerge. Stay tuned to the ABC soap and don’t forget to check CDL often for the latest General Hospital spoilers, updates and news.