General Hospital Spoilers: Will JaSam Ever Be A Real Couple Again? 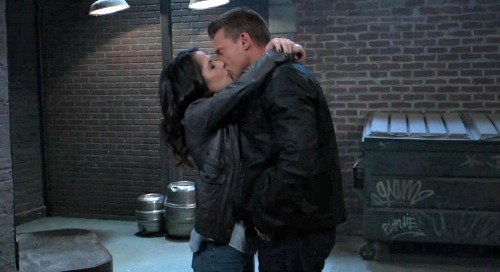 General Hospital spoilers reveal that many GH fans are getting tired of waiting for some serious Jasam screen time. Fans of General Hospital’s Jasam (Jason Morgan and Sam McCall) have waited since October 2012 for their couple to be reunited.

Some fans were not happy with Billy Miller’s version of Jason (but many love him) and could not wait for Steve Burton to return to the role. So why are fans still waiting for their couple when they supposedly reunited earlier this year and when will they be back together?

Six And A Half Years Is Too Long

General Hospital’s Sam Morgan (Kelly Monaco) would have dropped Drew Cain (Billy Miller) like a bad habit when her soulmate Jason Morgan (Steve Burton) turned up alive in Port Charles. Sam always felt that Jason was alive somewhere and when Drew turned up as Jason on a DNA test, she immediately wanted her man.

Sam quickly realized that this guy was different than Jason and although she tried to justify his actions, she knew something was not right. Sam was never even attracted to Drew until he was supposed to be Jason, that alone should have been a clue because Drew wasn’t drawn to her until then either.

After waiting until Steve’s return, fans wanted Jasam together but still had to wait. Finally, they reunited for one day and were back to square one because of this DOD storyline, when will it end?

Jasam Deserve To Be Happy

Sam and Jason had just reunited when Jason was kidnapped and disappeared for five years. Jason and Sam have wanted a child together since 2004, why are they not allowed to be happy with Danny Morgan (T.K. Weaver) after all this time apart?

Why do we not see any family time with them? After Sam and Jason lost baby Lila and then baby Hope fans waited years for them to be allowed to have a child – some fans think they  should not have to wait any longer for them to get together as a family. When Steve left, hopes were dashed for this and fans were left hoping they had made love before Jason’s death and Sam would have Jason’s little girl but were denied that as well.

Sam has Scout (Palmer and Poe Parker), but she belongs to Drew, not Jason. Yet again Jason has been denied the daughter he always wanted because of the recast. Die-hard Jasam fans want more!

How much longer do Jasam fans have to wait for their couple to be together instead of in name only? When are fans going to get some happiness with these two after the screw up of involving John McBain (Michael Easton) during Sam’s pregnancy with Danny?

GH writers might want to step it up and put these two together like many fans feel they deserve to be, Jasam fans have waited more than long enough. Come back to CDL for more General Hospital spoilers and news!