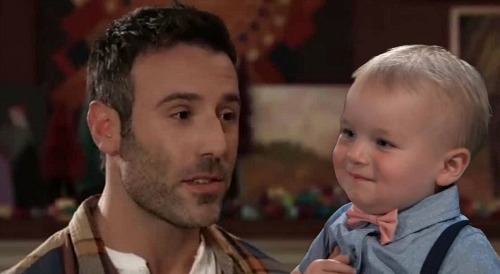 General Hospital (GH) spoilers tease that Willow Tait’s (Katelyn MacMullen) determination will grow stronger. Her wrath was definitely unleashed in that courtroom! Willow’s tired of Shiloh Archer (Coby Ryan McLaughlin) just taking whatever he wants and getting away with it. She boldly refused to divulge any info that could lead Shiloh to “Wiley Cooper-Jones,” but she paid the price for it.

Thankfully, Harrison Chase (Josh Swickard) was on hand to speak up and make the arrest himself. That sounds harsh on paper, but it was actually one of “Chillow’s” most touching scenes. Chase spoke up not to make sure justice was served but to make sure Willow felt safe.

GH fans watched as Chase read Willow her rights in a comforting tone and placed the handcuffs on gently. They both got a little choked up, but the love between them indeed helped Willow stay strong. This is the stuff soap ships are made of! Willow and Chase are really becoming quite the couple to root for.

Of course, there may be more legal woes that put their relationship to the test. Willow will undoubtedly get out of this jam sooner or later, but what about the next one? There could be a far bigger storm brewing based on that outburst. When it comes to “Wiley,” there’s nothing Willow won’t do for him. We have no doubt that Willow would kill Shiloh if need be.

Shiloh killed Willow’s father and Michael Corinthos (Chad Duell) should have proof of that eventually. Willow was also manipulated, drugged and raped. Shiloh made her life a nightmare that continues to this day. Willow’s whole existence is pretty much about ensuring this baby – which isn’t actually hers – stays protected.

What happens if Shiloh learns “Wiley’s” identity? What if it looks like Shiloh’s going to get custody of the kid? Willow could easily take matters into her own hands. Her actions in court prove that Willow really doesn’t care about the consequences for herself. Even walking away from the cult proved that. Willow knew her pledge could come back to bite her, but she ignored the risk to put her child first.

In other words, Willow wouldn’t care whether she went to prison for the rest of her life. “Wiley’s” life is what’s important to her. General Hospital has seemingly passed the point of no return with Shiloh. He’s just too disgusting for redemption. Most GH viewers don’t want to see this awful man change or turn things around; they want to see him die.

With that in mind, General Hospital may be building toward Shiloh’s murder. Could Willow be the one to pull the trigger, plunge the knife or use any other deadly method GH cooks up? Willow clearly couldn’t control herself in that courtroom. It’s not unreasonable to think she could lose control in a far worse way down the road.