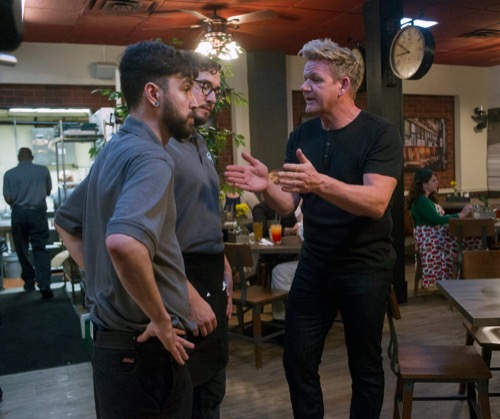 Ramsay will try to bring this failing restaurant back from the brink of disaster in 24 hours. Chef Aarón Sanchez stops by to lend his knowledge to the New Orleans cuisine.”

24 Hours to Hell and Back begins tonight with Gordon Ramsay going to New Orleans, Louisiana to a restaurant called The Trolley Stop Cafe, which opened in 1995 and sits on the longest Trolley route in the world; but none of these factors have stopped the cafe from going off the rails. Ragnar Karlsson is the owner and his grandfather, Hans Karlsson was the original owner.

Darren, Kitchen Manager says Ragnar has a masters in business administration but isn’t a master of anything. He only comes into the cafe, once or twice a week. He doesn’t even know who is calling him when Aaron who works there; people admit they are afraid of Darren who works really hard and says he is there on merit and Ragnar is only there because of family. Every month sales continue to decrease and if can’t make this restaurant work, the family legacy ends with Ragnar.

Gordon arrives undercover as Deputy Connor with several other Sheriffs; they reveal they have crossed this restaurant off their list of places to eat. The place is disgusting but they order classic diner dishes, which should all be considered “Big Easy”. In the kitchen, one of the staff flips the meat with their hands (unsanitary handling), while another is finishing the food on a dirty grill.

Gordon sends the Derek, one of the deputies to find the owner as their food arrives 34 minutes later. One dish has spoiled cheese on it and Gordon cannot eat his food, spitting it on a napkin and tells his table not to eat a single thing else. He retreats to the bathroom, removes his disguise and customers recognize him. He asks for 30 seconds and orders all the kitchen staff to come out. Darren says the owner is a sheltered boy who lives with his parents, admitting he runs the kitchen. Gordon tells everyone to follow him outside and forget the check.

Outside, he shows them his truck as Darren says Ragnar is only at the restaurant 5 hours a week. Deputy comes back in with the sirens blazing and Ragnar emerges. Gordon tells him to put the briefcase down, confronting him about the energy he has put into his restaurant. Gordon shows them the video his team has been recording with undisciplined staff, filthy kitchen, open containers, and flies on the food. Ragnar is embarrassed as a customer says it is disgusting. A customer tells him that he should leave and let someone else take over as he doesn’t care.

Gordon apologizes, saying they are not paying for that crap but asks them to return in 24 hours so he can turn the business around. Everyone calls their loved ones and says they won’t be coming home as Gordon confronts them about never seeing customers so angry, asking who is at fault for this. Darren says a lot of people are afraid to say it but it is Ragnar. He shames Darren, telling him to “man up” as he is a good chef or doesn’t call himself a chef. Kat says there is no communication nor standards. Gordon is shocked to learn Ragnar that he has an MBA, as he makes excuses about his lack of presence; saying he is surviving on the history his grandfather made. Gordon wants to know who is in or out? They all agree to be in as Brian and Theresa walk in from Gordon’s team.

All the furniture is taken out, as the cafe is long overdue for a change, Gordon calling it an “ugly stepchild”. There is a lot to do, as they work in the dining room, Gordon goes to see Darren and looks how disgusting the kitchen is; as it hasn’t been cleaned in years, confronting Darren on his lies. The kitchen is a war zone and sees that they served him mold cheese earlier. He shouts for Ragnar and gives them both a spoon for them to eat it.

With 20 hours left, all 3 of them take a huge spoonful. Gordon then continues with the fridge, finding blood and raw rotten meat; Gordon throws the meat at them and orders them to get it cleaned up. He says the kitchen is a nightmare but the big shame is everyone has given up, but he needs the three idiots to commit. Darren respects Gordon Ramsay, admitting he was right for letting it slip.

In the dining area, where once again Gordon is reminded about how disgusting the place is. Darren comes out to the “Hell on Wheels”, where he has created a new menu. He reminds him they are going to cook this and not reheat them as Darren shares more about his life. Gordon tells him he didn’t start at the top either, so he wants to make sure he grabs hold of something and makes it shine through the food. Darren is thrilled to have someone so powerful help and teach him in the kitchen. Darren is told to relax, encouraging him.

Darren wants to be proud of the Trolley and be happy at work again; as he tears up Gordon can see it. They have 18 hours left. He says this is why he is still here and leaves Darren to compose himself as he gets the other boys. Gordon knows that Darren has that flicker of hope and really hopes that Darren falls in love with cooking again. He still doesn’t know what to think of Ragnar as the rest of the kitchen staff join Darren and Mary.

Gordon calls Ragnar upstairs wondering if he bought this to compete with his grandfather and father for status and he admits he did. He isn’t capable of it; feeling he is letting everyone down, including his wife. Gordon says it is evident he didn’t fail at his passion, he tried to buy it. If he wants to own a restaurant, he needs to work in it and not remotely. Gordon tells him when he walks back down those stairs, he needs to lead like a boss. He needs to show every member of the staff how important they are for the business.

Gordon presents everyone to the new kitchen. Darren feels awesome and falling in love with it. Darren and his team prepare as they have 57 minutes left until open. Gordon welcomes Aaron Sanchez into the restaurant, who lives 2 blocks away from there. Aaron reminds them the incentive is on them and Gordon orders two of everything on the menu for them to try with 5 minutes away. Gordon calls everyone to the pass, as they judge the dishes; unfortunately, the chicken is raw and Gordon wants to know who made this staple dish. Darren and his team need to bounce back as everyone is arriving by Trolley and he worries about the mishaps. Gordon asks everyone to join him on the countdown and put this restaurant back on the map.

The customers and guests arrive, Ragnar greets them, including country singer William Michael Morgan. Everyone loves the difference of the décor as Gordon hopes this is a good ride for them. Tracy Porter, former NO Saints NFL player is among the guests. Gordon tells Ragnar the next table he needs to memorize the order, not write it down. Darren is rocking the kitchen but now he needs Ragnar to step up. He sends him to speak to the food blogger, Emily Hingler but ends up at the wrong table.

Gordon goes to see Emily Hingler and finds out both the pork chop and chicken are both raw. He informs the kitchen it needs to be refired and it was sent to the blogger/critic. Darren hopes they are confident in the kitchen, but once again the chicken is raw inside. Gordon brings it back and orders them to stop the kitchen, telling about the chicken. He pulls Darren aside, wanting to know why he is letting him down. He suggests Darren gets his jacket and f**k off! Darren says he isn’t a quitter and Gordon tells him to stop sending crap and get it together. He tells the kitchen they still have a chicken on the board and it needs to be beautiful and perfect. Gordon praises him on his work.

Ragnar feels if he can get his ass handed to him by Gordon Ramsay and survive the last 24 hours, he can get through anything. Darren feels service was hell but it feels damn good to be proud of the kitchen again. Customers say they will stick by him and return again. Aaron and his companions are served, where he loves that the restaurant is able to represent New Orleans.

Gordon reminds Ragnar that this is for him now, and he needs to do this for himself and family; not his dad and granddad. Chef Ramsay says goodbye as Ragnar hugged Darren, saying it doesn’t matter that his last name isn’t Karlsson, as they are brothers and Darren need to understand that. Gordon hopes Ragnar can show his team he can work as hard as them because then it has every chance of succeeding. He honks in the truck as he leaves.

Three months later, Ragnar gives an update saying the restaurant is succeeding as the three have grown closer and working together to keep it successful.