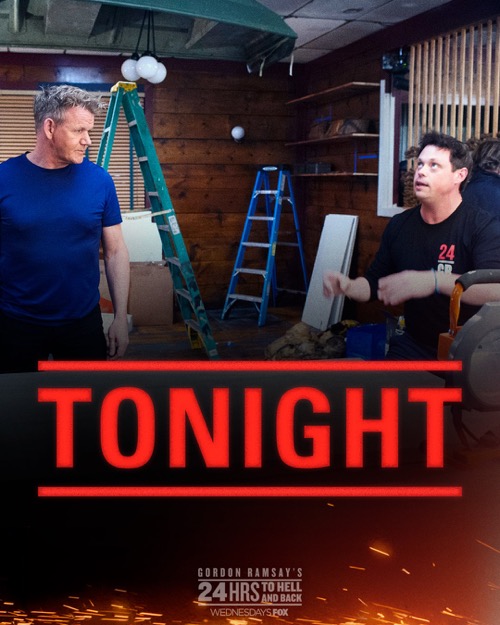 After intense investigation and surveillance, Chef Ramsay and his crew find a passionate, but a fragmented team, whose feuding is bringing down the entire restaurant’s morale. Ramsay will try to bring this failing restaurant back from the brink of disaster—all in just 24 hours.”

Tonight starts with Chef Gordon Ramsay taking his Hell on Wheels to Catfish Cabin in Memphis, Tennessee. It was established in 1971 and Rachael is the Manager/daughter; her father Charles is the owner. Rosie is the head cook, who has been there for over 15 years. The mother/father duo are constantly arguing because he doesn’t like her ideas and isn’t able to give her control, which causes the staff not to respect her and her decision making. Geraldine is general manager, who runs the day to day operations who contradicts everything Rachael says and constantly comes between Rachael and Charles. She loves her dad and this restaurant is a part of her, but if her dad has to sell it, it will break her heart.

Gordon dresses up as Larry the construction guy with Ryan, Rob, and KJ for lunch. He jokes that the place looks like it was closed in 1971, immediately says it smells horrible. They are ordering classic Memphis food that made the place famous. The hushpuppies are extremely greasy. They are waiting over half an hour for their food as the catfish is slimy like it has been dipped in dishwater. The hamburger looks disgusting and raw. He is done. He stands up, tells the customers to stop eating, put down their forks and calls everyone from the kitchen. Gordon Ramsay removes his disguise, saying he sat there for 60 minutes and ate the worse food he has ever tasted and the restaurant is closed immediately and they are to follow him outside.

He has everyone line up outside his Hell on Wheels, explaining what he experienced was shocking. Immediately Rosie argues that her food was not disgusting, nor greasy. The kitchen is disgustingly dirty, cross-contamination with food, rotting animal carcasses on the floor, and a cockroach infestation. He confronts Rosie, asking her what she cleans and calls Geraldine “crazy”. He says Charlie is lucky to still be alive, eating from that every day, when he says he is trying to get out of it. Chef Ramsay asks if he has the commitment from the customers to come back in 24 hours to enjoy a proper catfish cabin; they all agree. He tells the staff to call home as they are not going home for 24 hours either.

With Charles in the office, Rachael admits that she is told to be in charge but has no authority to do anything. She tries to talk to Geraldine who ignores her. Geraldine can’t say what the real issue is. Laquita, a server says it is so fragmented because the top of the pyramid is so split it divides the entire restaurants. Rachael says she is coming in with business and when Geraldine gets defensive, Shayla says it is Geraldine who has the attitude. Gordon says the customers can feel the animosity, but he is shocked to learn that Rachael is handling the books and everything else; which he feels is insane.

The renovation team arrives and puts people to work, literally taking everything out. Florida has a breakdown in the kitchen as Rachael holds her and together they promise it will get better with Gordon being there. Brian and Theresa are busy at work with the renos as Gordon wants to check out the kitchen with the kitchen staff and Charles and Rachael. He shows them rotten catfish, ground beef and is mad that they can’t label and cover-up. Rosie gets pissy.

Chef Ramsay swipes a swimming pool of greasy over the oil vats, as Rosie says how dirty it is. He says it can cause a massive fire. He lifts up the floor and calls its cockroach duvet.; something Charles says he cannot argue with, Charles says he is not going to argue with Gordon, getting right in his face but Gordon tells him to “f*** off” and if he is going to walk out with him. Gordon says if Charles walks out, so is his team. Rachael shouts for her dad to stop and there is 19:55 hours left.

Charles agrees to listen to him and Gordon tells Brian and Theresa to return to the renos. Gordon says tells them all to step up, leaving it up to the crew to clean up the entire kitchen; hoping they can work together.

Chef Ramsay brings Rosie to Hell on Wheels, telling her she needs to be the heart and soul of Catfish Cabin. He shows her the recipes he has come up with for the restaurant, showing her how to make them. He says it is nice to see her get her passion back for cooking.

Gordon sits with Rachael, who shares how important it is for her to run this business. Her biggest frustration is dealing with Geraldine every day. He asks Charles why he is backing Geraldine over his daughter and he says he needs to take a second look at this. Geraldine joins them saying the animosity is not with her, as Gordon makes her watch surveillance where she takes a wad of cash from the till and shoves it in her purse. She claims it was for the business, but she didn’t mark down how much she took, nor what it was for. Gordon reprimands her as Charles says he is going to let Rachael handle it. 15:04 hours to go.

Rachael thanks Geraldine for her time but fires her. She is disappointed as Rachael says she has tried and tried but it will never work as long as the two of them are there. Geraldine stands up and walks out as Charles hugs his daughter. Geraldine doesn’t think she did anything wrong but leaves anyway. Rachael informs the rest of the staff that they are moving forward with Geraldine gone and Rachael is now in charge; everyone applauds her and hugs her; like a weight has been lifted. 6:47 hours left.

The cleaning crews are busy working removing 5 decades of crap from the kitchen and installing all new equipment, including new fryers. Chef Ramsay heads out to see how things are going with Rosie and Andrew are doing with the new menu. Mary says they are moving slow, as they are not used to doing things minutely. Inside, the ladies are exhausted but great and the chefs are able to see their new kitchen as Rachael gives him a massive hug, very grateful. They have 1 hour before opening and Gordon asks the cooks to fry one of everything to perfect it; unfortunately with 10 minutes left there is an issue with the chicken.

They are given a pep talk as Ramsay tells them they are given a touch system to use. Charles hands everything over to his daughter, Rachael, saying they cannot go around her to him. He firmly believes in Rachael and together with the customers they count down the last 10 seconds and the real test begins.

Unfortunately, Chef stops the kitchen as the raw chicken is returned and immediately refired. Orders begin to pile up and the kitchen seems to end up in hot water, causing Chef Ramsay to hope into the kitchen. The chicken is brought back again and Chef Ramsay calls Rachael to the kitchen where it is still full of blood; Rachael is in her office crying. She pulls herself together and tells the kitchen to slow it down and make sure everything down and get it together as they can’t kill anyone. Rosie says she is pissed but Rachael reminds her they have it.

With Rachael’s newfound confidence and Rosie finding her voice, food is finally going out hot and on schedule. Diners are hooked, telling Gordon Ramsay they would definitely be back. Gordon tells Andrew and Rosie they are loving the chicken as he wishes them good luck and his time is done. He encourages her to use her voice and passion. He tells Rachael his time is done as this has been a monumental 24 hours, to stay strong and not afraid to make decisions.

3 months later
Charles thanks Chef Ramsay saying Rachael is doing a great job as sales are already improving. They are extremely excited and working hard. Everyone is positive and communicating hard. Staff thinks Rachael is going to make her dad really proud!