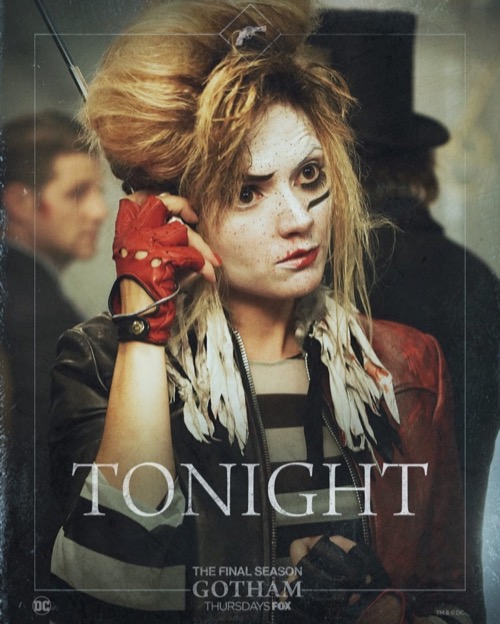 Tonight on FOX Gotham continues with an all new Thursday, February 21, 2019, called, “Ace Chemicals” and we have your Gotham recap below for you. On tonight’s episode as per the FOX synopsis, “Gordon races to uncover the criminal element threatening to end talks of Gotham’s reunification with the mainland. A very much alive Jeremiah returns and organizes a twisted recreation of the murder of Bruce’s parents with the help of Jervis Tetch aka Mad Hatter.”

Several men run down a city street in the night with bloody z’s across their chest. Meanwhile, Gordon speaks with the General who is investigating Walker’s disappearance. He assures Gordon the nightmare for Gotham is about to end. Gordon heads downstairs to see Bruce who is looking for Alfred. Gordon sends him home to rest. Gordon is called to a crime scene.

Gordon arrives to meet with Bullock. There are 4 dead men with z’s in their chest. They need to figure out who did this. Near the men sits a makeshift movie set.

On his walk home, Bruce sees an alleyway plastered with news clips of his parent’s deaths. He sees someone make their way by him fast. He follows them into a building that leads to tunnels.

Barbara pays Lee a visit. She wants her to be her OB. Gordon shows up. He argues with Barbara. She accuses him of thinking she isn’t fit to be a mother.

In the tunnels, Bruce is led to a home where his parents are. Alfred comes in. Bruce is confused. Jeremiah is in the corner. He welcomes him home. Bruce is shocked he is still alive. Jeremiah taunts him. The Waynes are actually a couple who had plastic surgery. He dressed them like his parents the night they died. He grabbed Alfred in the green zone and hypnotized all three of them. Now he wants to write history the night Bruce’s parents died so he can be a part of it.

Gordon and Lee are walking in an alley when they see Leopards. They stop and hide. They get to talking about Barbara. He wants to explain. It is his child too. Lee shrugs him off and sees a symbol on the alley wall from the Chessman.

Bruce plays Jeremiah’s game. All of them sit in the kitchen while Alfred serves Bruce a grilled cheese. Bruce gets angry and tells him to let everyone go. Jeremiah just wants to be his friend. Angry, he gets up and leads the fake Waynes and Alfred out of the kitchen as a bomb counts down near Bruce.

Lee and Gordon walk to an underground location where they find several men all hypnotized. Tech comes out of the shadows in a top hat. His men attack them. They try to fight back but end up tied to a post.

Barbara meets with Catwoman. She plans to get out of Gotham tonight. Barbara wants to go with her. Meanwhile, Bruce and Alfred are in the tunnels when they explode. Alfred falls to the ground and gets hit in the head. He returns to his normal self, aware of what is really going on. He and Alfred hug. Alfred thought he lost him. They start to try and make their way out of the tunnels.

Penguin and Selina come face to face with Alfred as he comes out of the tunnels. Alfred tells them about Jeremiah and what he has done to Bruce. Bruce has gone after him. Selina leaves to help Bruce. Penguin thanks Alfred half-heartedly before taking off.

Bruce comes into a movie theater where a film plays on the screen. It is a movie went to see when he was younger. One that scared him so he asked his parents to leave. Jeremiah comes on the screen and taunts him. Maybe if he faced his fears back then he could have stopped his parents from being killed. Bruce runs. Jeremiah chases after him. They stop in the alley. Jeremia is determined to make he and Bruce friends, brothers even or if he has to enemies. He has Gordon and Lee with him dressed like the Waynes and hypnotized.

Jeremiah plans to replay the night the Waynes died. Bruce intercepts him from trying to shoot Lee. Selina comes out of the darkness to help. Gordon and Lee snap out of it. Jeremiah runs, leaving a bomb behind. Gordon quickly drives it off a bridge before it can explode. Meanwhile, Bruce tracks down Jeremiah in a dark warehouse. They fight on a catwalk above several large commercial vats. Jeremiah falls in one of the vats filled with neon green acid.

Penguin meets with the Nygma who is mad still. Penguin tells him they can change things. Meanwhile, Gordon and Lee talk. He tells her he wishes he could go back and do things differently, better. She tells him he let her down. She slaps him before they kiss.

Bruce and Selina look over Jeremiah who is unconscious in a hospital bed with bandages on his face.

Penguin and Nygma arrive to find Barbara waiting for them. Nygma points out that she is pregnant. She cannot believe they know. She is glowing. They talk about their plans to build a submarine. She lets it go and leaves.