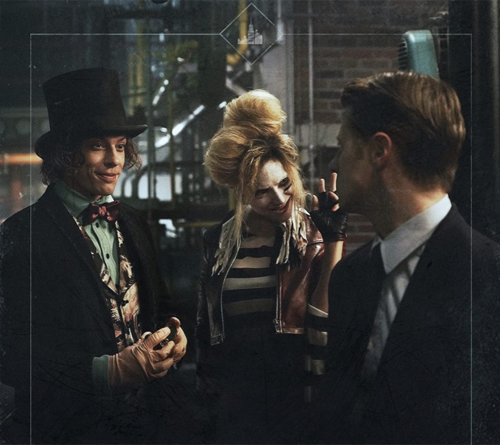 Tonight on FOX Gotham continues with an all new Thursday, February 28, 2019, called, “Nothing’s Shocking” and we have your Gotham recap below for you. On tonight’s episode as per the FOX synopsis, “Bullock’s past comes back to haunt him when he and Gordon investigate two murders at Sirens. Meanwhile, Bruce and Alfred explore the tunnels beneath the city, and Penguin and Nygma’s plans to escape are thwarted by the least likely of suspects.”

Penguin had a plan for escaping Gotham. He let others in on this plan because they were all pretty desperate to leave the hell hole that their city was now, but they needed a few things first. Like oil. Barbara had tried scrounging for some and a couple of old cops on her payroll had found some. They brought the information to Barbara because they wanted to a drink at her bar and unfortunately they never got that drink. They ran into Harvey’s old partner Dix at the club and former good guy killed them when they stood. He even left the bodies behind for Barbara to clean up and before she did she called it in.

Barbara called Gordon and Harvey. The boys wanted to know what happened and were left confused when she said her guys were killed by someone they called Dix. The last either of them had seen of Dix he had been in a wheelchair. Dix had been paralyzed decades ago and so Harvey accused Barbara of making up her story because he said there was no way Dix could have done it, but she didn’t care what he thought about her nor would she fake a crime for his attention. Barbara could barely stand to have Gordon around all the time asking how she was doing and wanting to be active in the baby’s life. And so Harvey figured the only way to prove her wrong was to go see Dix.

Dix moved into an apartment a year ago and so Harvey went over there to see him with Gordon. The boys were nearly killed when Dix shot first and asked questions later. Which thankfully had just been an accident. Dix had found out what happened to his friends on the beat and he thought someone was coming for him. He was actually packing when the boys showed up and they saw for themselves that he was still in that wheelchair. Dix was still paralyzed and that’s why he wanted to leave before whoever killed his friends came for him. He knew he wouldn’t be able to fight anyone off.

Gordon wanted to know who would come after the guys and was going to get answers one way or another when someone did show up to kill Dix. The assassin wore a face that looked just like Dix and it had been ripped off in a fight with Harvey. Harvey couldn’t catch the guy, but he knew it was a man and therefore he didn’t think these murders had anything to do with what happened on an old case. The way Harvey tried to never bring it up had made Gordon suspicious. He looked into the one case in which all four men worked together and he found Victoria Cartwright. She had been sent to jail for murdering her husband and the only evidence had been the testimony of her daughter.

Victoria Cartwright’s daughter Jane had been a child at the time. The police records listed her as still living in Gotham and so Gordon wanted to ask Jane some questions. He could several officers and left Harvey behind. Harvey was keeping something from him and Gordon didn’t believe he could trust his friend to be impartial on this case. He left Harvey behind and the team he took to Jane ran into a monster. The monster calls itself Jane Doe. She didn’t refer to herself as Jane Cartwright anymore because she said Jane Cartwright died at Arkham. It was where she had been sent when her mother went to prison and it was where Hugo Strange experimented on her.

Strange had been fascinated by the idea of how the human skin could twist and change. His “work” on Jane made her a mirror. She could mirror anyone with one touch and she also shapeshift out of anything. The last part wasn’t known when she brought back to GCPD and questioned. Jane admitted to killing those guys and wanting to kill Dix, but she told Gordon if he wanted to find out why then he would have to ask Harvey. Harvey couldn’t be found because one officer later claimed that he took Dix to another room and it turns out Gordon wanted to speak with the both of them. He went looking and he found one just not the other.

The Harvey that Gordon ran into hadn’t taken Dix anywhere and so that’s when the guys realized that Jane could have escaped her handcuffs at any time. They went looking for her and sadly they had been too late to stop her from killing Dix. The body was still warm and therefore she couldn’t have gone far. Only by time they found her again, she had taken on Barbara’s face and Gordon couldn’t tell the difference between her and the mother of his child. The real Barbara had called cops idiots and Jane tried to get away. The police chased after the false one and they cornered at her old home.

Harvey had gone in to finish what he started and the first thing he asked of Jane was if he could see her face. She kept saying her own face had been ruined and it hadn’t been. Jane still looked like Jane and she was the only one that couldn’t see it. Jane said she has a face of a killer and she was going to kill Harvey, but he shot her first and he didn’t admit what he did until after. He said that Cartwright did kill her husband. She admitted it and then recanted. The evidence wasn’t there and so Harvey lean on Jane to get her to testify against her mother. Cartwright went to prison and she died there. And it seems the only reason she had killed her husband was because he beat the both of them.

Cartwright didn’t kill her husband because she was bored. She did it to protect herself and her daughter. Something of which that Harvey suspected, but that his superiors told him to ignore because they didn’t want to ruin the case they had against Cartwright. And so Harvey did as he was told until eventually he was just like them. And Jane was left with no one.

Penguin’s plan in the meantime hit a little roadblock when he and Ed had to deal with a weird assassination attempt that used a puppet.