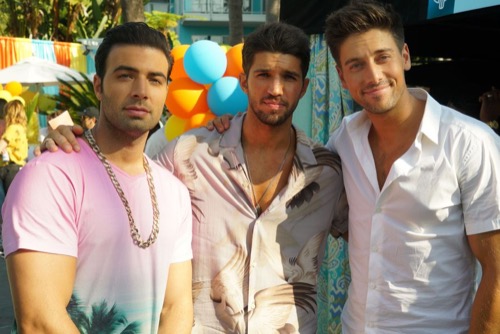 Tonight on ABC, Grand Hotel airs with an all-new episode Monday, July 29, 2019 episode and we have your Grand Hotel recap below. On tonight’s Grand Hotel season 1 episode 7 called, “Where the Sun Don’t Shine,” as per the ABC synopsis, “Santiago takes matters into his hands. Danny envies Alicia’s relationship.”

Its Spring Break and the hotel is packed. With the staff all busy, Danny gets roped into delivering roses to Alicia from Oliver. It is an awkward moment for both Alicia and Danny even after they try to both acts cool about it.

Gigi and Santiago talk about what to do with Ingrid and Mateo. Gigi wants something done. Santiago isn’t rushing to do anything. The kids show up for dinner. Meanwhile, Helen is on the job at The Finn, working for Santiago’s competition to gain hotel secrets and steer them wrong.

At breakfast, Carolina tells her mother she could have eaten better about Yoli’s news that she is gay. Javi arrives and says he is happy to not be Ingrid’s baby’s father and he is ready to party.

After talking to Santiago, Helen offers Ingrid a job at The Finn. Back at the Grand, Jason runs into a hotel guest looking for Sky. Before he can get answers the girl runs off. Santiago runs into a guest who says he is headed to The Finn, they have a better alcohol deal for Spring Break. Santiago calls Helen, he doesn’t know what to do.

Jason tells Danny about the girl looking for Sky. Gigi finds Yoli and tells her she loves her and accepts her. While they talk, Gigi asks if she will ever be with a man which angers Yoli. Jason says goodbye to Ingrid. Santiago confronts Mateo about Ingrid’s pregnancy. Mateo says he had no idea.

Alicia and Santiago admire his handy work when he has a huge billboard erected for ElRay, blocking the sun at The Finn. A ton of the college kids returns to the pool at the Grand where Jason and Danny hunt for the girl who was looking for Sky. Danny finally tracks her down but a drunk Javi sends him on his way after accusing him of stringing along Alicia. Ingrid calls, Javi decides not to pick up.

Helen works to get in good with the owner Michael of The Finn. Oliver and Alicia meet for dinner at the Grand. Just as they kiss, Danny shows up to take their order. Oliver steps away to take a call. Danny overhears him say “don’t worry, she has no idea.” He must be talking about Alicia.

Yoli arrives home to a surprise “coming out” party Gigi has thrown for her.

Danny tracks down Alicia and tells her that Oliver sounds like he was plotting something on the phone earlier. She doesn’t want to hear it.

At her party, Yoli is stressed. Marisa thinks it is all very sweet. Gigi gives a speech about her love for Yoli and a dance recital where she was doing her own thing among a group of girls. Yoli runs off. Carolina was the one who did her own thing.

Santiago finds Javi drunk and partying with the college kids at the hotel. He tries to stop him but cannot. Javi takes a group of girls back to his room. One of them is the girl who knows Sky. Danny asks Jason to go and talk to her by bringing alcohol to their room. On Jason’s way up he bumps into a teary-eyed Ingrid who stopped by to tell Javi she really did have feelings for him. He sends her away after calling her a liar.

Inside his room, Javi tells the girls Ingrid is trash and a liar. Jason gets mad. Javi swings at him but misses. The girl’s runoff. Jason discovers the girl’s name is Chloe.

At her meeting, Helen is kissed by Michael. She pushes him off and slaps him. She threatens him and leaves the room, upset outside.

The next day, Helen tells Santiago what happened. He wants to call the police but Helen doesn’t want to. She will never win against a man with money. Helen tells him to hire Ingrid back. They can’t leave her over there.

Gigi comes to see Yoli. She tells her some time she is tough on her but she is so much like her father. They talk and make-up.

Alicia and Oliver are sharing a drink when he steps away. She sees his face. He is up to something. She goes running to find ElRay being scooped up by The Finn. Santiago tracks down Mateo and tells him to have his people deal with The Finn. No-one can get hurt.

Carolina and Yoli talk about their mom and dad. Carolina knows where their dad is if she wants to see him.

Alicia breaks things off with Oliver. Meanwhile, Danny comes face to face with the girl who knows Sky. He knows she has been using a fake ID. He will look the other way for information. She shares that her friends bought pills from Sky last Spring Break. Meanwhile, Javi is alone in his room. He takes a few pills from a bottle prescribed to Sky.

Javi finds Ingrid outside at The Finn. He asks her how long she lied to him when a deck gives way just above them.