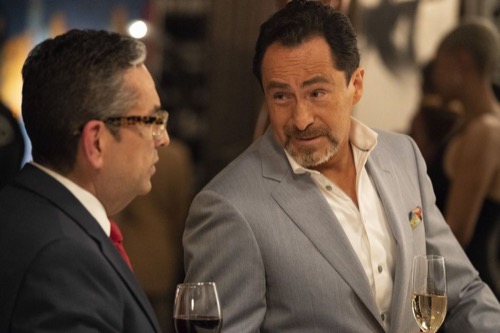 Tonight on ABC, Grand Hotel airs with an all-new episode Monday, August 26, 2019 episode and we have your Grand Hotel recap below. On tonight’s Grand Hotel season 1 episode 11 called, “Art of Darkness,” as per the ABC synopsis, “Teresa holds a charity auction at the hotel; Javi and Alicia discover more about Beatriz.”

Tonight’s episode of Grand Hotel looks like it is going to be great and you won’t want to miss it, so be sure to tune in for our live Grand Hotel recap at 10:00 PM ET! While you wait for our recap hit the comments and check out the rest of our television recap, videos, spoilers & more, here!

Felix talks Gigi into getting on a boat with him after she sneaks him out of the hotel. Meanwhile, Alicia and Danny are sitting in front of Helen. Alicia wants him fired. Helen needs a specific reason for his firing. Alicia doesn’t have one. Helen tells her there is nothing they can do.

At family breakfast, Alicia, Javi, Carolina, and Yoli all talk. The girls tell Javi and Alicia how their mother probably ran off with Felix. Santiago calls Gigi, she tells him she needs some time.

Danny sees the mob lady, Theresa,  go upstairs to see Santiago. Theresa tells Santiago she is throwing a party in his suite. Mateo tells Danny he needs to work at a private party. He accepts. He tells the detective he has been working with his plans to work for the party.

Santaigo needs a favor from Carolina’s ex-fiance. He needs a silent partner. Byron tells him he will consider if Carolina apologizes. Alicia spots the whole thing and confronts Santiago who confesses he is looking for a silent partner. Danny seems to be telling the truth about her dad.

Javi has a flashback of his mother rushing him down the hotel hallway to a room away from Santiago.

Helen sees Jason and his date and the bar and embarrasses him. Carolina apologizes to Byron. Santiago calls Gigi to share the news. Danny and Alicia run into one another in the elevator. He tries to explain how much he cares for her. Meanwhile, Gigi has been drugging Felix. After he passes out she gets his bank information of where he is hiding his money. She heads to the bank to make a transfer.

Gigi brings the money back to Santiago. He is shocked and happy. Meanwhile, Javi tells Alicia about his flashback. They decide to do some digging.

Santiago and Gigi meet up with Theresa to give her the money. Theresa isn’t looking for a payoff. She needs them to pay in installments because she plans to use their hotel. Mateo tells them there is no getting out from under her.

Helen and Ingrid talk about Ingrid’s jealousy about Jason and his new girl. Danny gets wired up for Theresa’s party. At the party, he makes small talk with a guest. Theresa tells him not to talk. The detective tells him to see if the art is hiding heroin. He pretends to fall into a piece. It shatters on the floor. Theresa is irritated but not too upset about the art, proving she is trying to sell something else.

Ingrid gives Jason a few pointers on wooing his lady friend. Javi and Alicia discover the room their mother used to take him too hasn’t been used in 10 years.

Gigi is the one to figure out that Theresa isn’t selling art but the women in the room. Danny overhears Gigi speaking with a scared woman. He tells the detective who arrives with back-up minutes later. Theresa and Mateo run for it.

Yoli admits to her mother that she and Sky used to hook up in the room where they hid Felix. Gigi’s face drops before she pretends to be fine. Felix calls Yoli and tells her to tell Santiago he should have killed him when he had the chance.

Theresa tells Mateo they need to go on the run. He shoots her in the car in a parking lot.

Alicia has her own memory of her mother and room 606. She pretends Santiago and Gigi forcing her mother back in the room. She tells Javi.