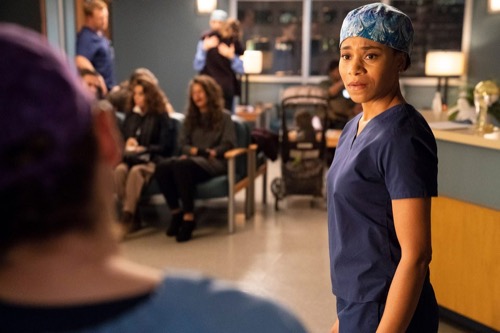 Tonight on ABC their hit drama Grey’s Anatomy returns with all-new Thursday, February 21, 2019, season 15 episode 14 and we have your Grey’s Anatomy recap below. On tonight’s Grey’s Anatomy season 15 episode 13 called ‘I Want a New Drug,” as per the ABC synopsis, “While Meredith breaks a hospital record, the rest of the doctors are sent scrambling in the wake of a massive overdose within the community. Meanwhile, Jackson wants to take a reluctant Maggie camping, and Levi and Nico’s relationship continues to develop.”

Meredith Grey broke the record for the longest recorded surgery at the hospital. She was actually still in the middle of this surgery when one of her interns began wavering on her feet and so she asked Hellmouth to take a break. She wanted the intern to go help out in the pit, but the hospital’s Emergency Room was flooded. There had been a mass OD at a local park. The ER was full of teenagers that went looking for a high and took a bad batch of drugs. They were all in various stages of OD with some responding to the usual medication and others having some resistance. And there wasn’t much that Hellmouth could do.

The interns could only do so much. The hospital needed more attendees to come in and so Teddy made the call of bringing in Owen. Owen was at home with baby Leo and he and Amelia were supposed to be getting the child ready to hand him over, but it had been too hard for Owen and so he took them out when it came. He went back to the hospital and lost himself in his work. Owen had been so busy treating patients that he didn’t notice Betty until she went to respiratory distress. She was having a hard time breathing on her own and had ultimately needed to be incubated before she was moved to surgery.

Owen knew that Amelia saw Betty as a daughter and so he had Richard call her. Amelia came in not knowing how serious the problems were and she brought along Betty’s parents because they had been with her when she got the call. She thought it was just Betty getting high, but then they all saw her. Betty had been out by then and she was breathing through a tube. Her heart suffered a bleed because she was OD’ing on meth that was possibly cut with something else and so everyone was given one last glimpse of her before she was rushed into emergency surgery. It hurt them to see her like that and they wanted to know what happened.

The only person that could truly say was Betty’s boyfriend. She came in with a guy that really loved her and said he wanted to spend the rest of his life with her, but then he died from the drugs he took and all it did was just remind Amelia about what happened to her. She was a drug addict and her bottom had come when she woke up to find her boyfriend had overdosed next her. Amelia never got over that tragedy and she didn’t want that for Betty. Betty whose real name was Brittany (despite people rarely using it) was still this young kid who deserved a chance to have a life and to be there for her son. And so everyone prayed for her.

Maggie even put off her camping trip with Jackson. She wanted to be there to support Amelia and she told Meredith what was going the second Meredith finished that surgery, but luckily Betty pulled through. She made it through the procedure and there was no reason to doubt she wouldn’t wake up. So it came as a relief to everyone that cared about Betty. She was one of the rare cases to pull through her overdose without any repercussions. There had been her boyfriend who died, a woman who broke both of her arms when she fell, and another woman who didn’t suffer any side-effect of the OD yet suffered repercussion all the same. The last had been a mother who brought her child to the park so that she could get high and by accident, she fell asleep.

This woman, Wendy, she fell asleep and when she woke up she couldn’t find her son Truman. It was by sheer dumb luck that a kindly homeless man found the toddler and brought him to the hospital. Truman was going to be okay, but his father found out what happened and told the police they could do what they want with Wendy because he didn’t care. He couldn’t trust a wife that was a careless junkie and Alex backed him up. Alex had been left in the park when he was six by someone that cared about that high and he told Truman’s father that no matter what Wendy said or did she couldn’t be trusted with Truman until she proved she could keep him safe.

Alex had never told Jo that and so she got him to see another side of him. She saw the part that was still a frightened kid and she made sure to get her husband a hot chocolate to end a difficult day. But everyone chose to handle the end of the tragedy in their own way. Amelia and Owen stayed around until Betty opened her eyes, Meredith finally got some sleep, and Maggie and Jackson chose to give all of their camping gear to the kind homeless man who deserved someplace warm to sleep if he couldn’t get into a homeless shelter.