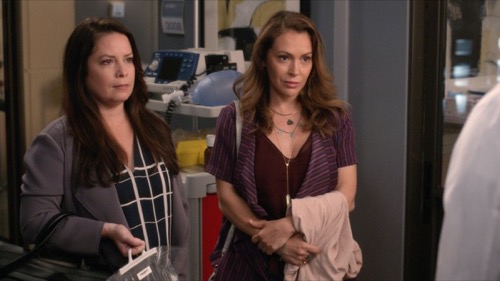 Meanwhile, a patient at the hospital is brain-dead after falling into a construction site, and her two sisters must decide whether or not to keep her alive.”

Amelia was keeping the baby. It was a recent decision and she hadn’t gotten everything figured out, but she was happy. Amelia understood the risk she was taking. She also knew she couldn’t let her previous experience stop her from enjoying this baby and so Amelia wanted her little him or her. She wanted to give birth. She just didn’t know how everyone else would react and its why she started small by telling Maggie. Maggie wasn’t the type to judge. She was happy for Amelia and together they worried how Meredith would react.

Meredith meanwhile was going ahead with her own plans. She was writing an article about health insurance and how the system was broken. She hoped that her article would help people realize how the sick and uninsured shouldn’t have to decide between death or bankruptcy, but she was warned that her article might send unnecessary shockwaves. Her boyfriend was thinking about her review with the medical board. He didn’t want her to risk her license by making a point and yet he couldn’t stop her.

Meredith was going to do what she wants. Its one of the things DeLuca loves about her and so he just had to put up with it. DeLuca was in enough trouble as it was at the hospital that he didn’t need any extra stress. Not when he crossed Bailey and had been put on the ICU. Bailey has been on the warpath since she fired her favorite people. She didn’t like being reminded of what she did and so she was sorta mean to everyone now. This went especially for the interns. Some of them were giving off attitude ever since Meredith was fired.

Dr. Qadri was one of them. She had been overseeing Meredith’s patient Shirley and it was hard to watch Shirley give up on the surgery if she couldn’t have Meredith Grey. Meredith had been the one to calm down the woman in the first place. She told Shirley that she could go on vacation and that they have the surgery when she came back, but when Shirley came back, she found out Meredith was gone and that Meredith’s student was taking over. Shirley didn’t know Jo. She didn’t like Jo and she didn’t trust Jo.

Shirley just wanted Meredith. She refused to let any other doctor perform her surgery and so Jo tried to find a way around that. Jo tried talking to Bailey. She wanted Bailey to give Meredith special privileges to perform surgery at the hospital and Bailey said “no”. She was very stubborn about that one. She said Meredith was never going to set foot in an OR at her hospital ever again and so Jo posed the question “what if she didn’t have to step foot into the hospital”. Jo suggested that Meredith oversee the surgery via video call.

It would mean she didn’t have to come into the hospital. It would also mean Shirley would get some of what she wants if not all. Bailey hadn’t liked the idea, but she agreed to it and Shirley did so as well. Jo would perform the surgery and Meredith would be there to advise. Meredith didn’t have to worry about taking a break because she won some brownie points with her supervisor. She was, therefore, rearing to go by the time Jo called her for the consult. Jo performed the surgery under Meredith’s gaze and there was a small hiccup.

The patient began bleeding for no reason. Jo was trying to fix it when Qadri made one comment too many and Jo told her to either shut up or leave. She didn’t need to hear how Meredith wouldn’t have made the same mistake. What Jo needed was support and she got that from Meredith as well Bailey. They stood by her as she performed the surgery on her own. It was her first as an attendee and it had been a success. No thanks to Qadri. Qadri yelled at Bailey because she said she picked this hospital to work with Meredith and not Bailey. And so Bailey promptly fired her.

This was just one more sign of how things have been off since Meredith. Bailey also wasn’t helping herself and so she soon found another reason to be upset. This time she wrongfully assumed that DeLuca made a mistake with a patient and it hadn’t been him. It was actually Schmidt that made the mistake. The guys never got around to explaining this to Bailey because Bailey was too quick to judge. She judged this one to be DeLuca’s mistake and stormed off before anyone could say something.

Bailey was only like this because she couldn’t take out her anger at the people she truly was upset with. Meredith was off picking up trash. The guys, however, were at a different hospital and they were dealing with their own difficult case. They helped two sisters decide if they wanted to take a third sister off life support. It had been a hard choice for them and there was a lot of arguing involved, but the sisters made this choice together and not long after they did, they realized they accidentally killed the wrong person. Their sister, the real one, was just fine.

Her bag had been stolen. So, the person the sisters took off of life support was a thief. A now-dead thief. Richard then had to stop the sisters from again bickering. They were arguing about whose fault it was and he had to remind them how lucky they were. They had gotten this second chance and he warned them against it. Richard also ended up making his own mistake. He went out to dinner with an old friend because he didn’t want to go home to his wife and it looks like he may have started something he can’t finish.

Only Amelia soon found time to reveal her happy news. She thought that Meredith would freak and it had been the exact opposite. Meredith had been happy for her. She was glad about becoming an aunt and this baby was going to be so loved. It had Amelia, Linc, Meredith, DeLuca, and Maggie. Maggie was working through her own issues because her ex/stepbrother was dating someone else, but Maggie was so going to be there for the baby.