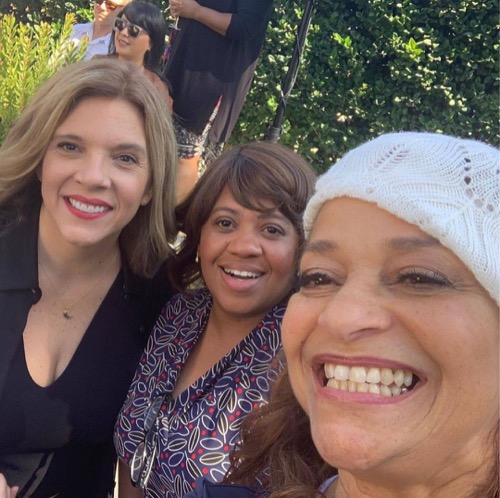 Station 19’s Ben and Vic bring a young woman into the hospital, and Jackson stands up to Koracick when he goes too far with a patient’s family. Meanwhile, Bailey receives unexpected news; and Owen finds himself at Pac-Gen North, which Alex sees as a recruiting opportunity.”

Meredith found herself in a little trouble. It seems she accidentally wrote an article and now that article was making the rounds. Here’s how it happened. She sent some headlines along with descriptions and ideas to a medical journal and they used that to create an article. They even gave her credit for it. They said it was an expose from a disgruntled ex-employee and now whenever someone reads her article they believe she’s talking about Grey Sloane.

When really, Meredith was talking about medical care in general. Her article as in the real one she was going to write had been how big pharma turns people into profit and how everyone is forced to go along with it. Meredith would never have name names. It was this fake article that was making appear as if she had and it was affecting the hospital. Patients actually demanded other hospitals once they saw they were being taken to Grey Sloane.

People were also quitting after the article came out. The Chief Resident quit and Bailey elected DeLuca to the position because she said it was his job now to save the hospital. The fact his girlfriend was on the brink of destroying said hospital went unsaid. Bailey was thinking just that and everyone knew it. They also knew she was going to lose her cool eventually. They tried to stay on her good side in the meantime and they also tried putting out fires without Bailey knowing about them.

Koracick even came up with an idea to make the hospital look better. He offered to cover the cost of a little girl’s surgery if the parents consented to film the surgery and so the parents were so grateful that they didn’t care they were being used. The only person that minded was Jackson. Jackson was the doctor on the case and he said it felt grubby. He thought the parents were misled. He also didn’t want to pander to the cameras and being anyone’s token hot doctor.

Not that Koracick cared how he felt. Koracick believed he was fixing the hospital’s image after it had been tarnished in the media and so perhaps he did go too far in his cinematic quests. He did several “interviews” with the parents where he pushed for the best reactions even when he was being tasteless. Jackson had to step in at one point because he said the parents didn’t agree to all that. Jackson kept trying to push Koracick away and so Koracick had to threaten to call Jackson’s mother on him.

Catherine did own the hospital after all. Its why the fact her husband was fired was still so shocking. Richard and his wife have been having problems since then, but he’s been making worse by refusing to go home. He instead finds other ways to spend his time and that includes other people. Then, when he wasn’t making questionable decisions, he and Alex were trying to run one of the worst hospitals in Seattle.

Like it was a good day when security caught the escaped psych patient before he could change into scrubs. Plus, both Alex and Richard hate it there. They were trying to make the best out of a bad situation because they had no other choice and it was as they were propping each other that Owen visited the hospital. He was taken his patients there now because they didn’t want to go to Grey Sloane.

It was bad news for the patients, though. They went from a bad hospital to an even worse hospital and still, Owen lent a hand. He was helping with patients and it was just like the old days with him working alongside Alex. It was too bad Richard couldn’t be there as well. He was the one other good doctor at the hospital and so he was in surgery when everything went down. And so the guys at least were doing their best to move on.

The same couldn’t be said for Meredith. She was going to write an article anyways and so the only difference between the real one and the fake one is that the real one would have been just a tad nicer. It wouldn’t have said the problem was merely one hospital. It would have said the whole system needed to be fixed and so maybe that one wouldn’t have frustrated Bailey so much. Bailey got so angry that she actually thought she was having a heart attack.

She wasn’t! Bailey later learned she was going through menopause and so she was being extra sensitive right now as she railed against both Meredith as well as her own dying fertility. So, Meredith came to the hospital at the most inopportune moment. Bailey didn’t want to see her and she was going to throw her out of the hospital when Meredith apologized. Meredith took her by surprise when she did it.

Bailey was expecting arrogance, not penance. Only Meredith apologized because she didn’t mean to hurt the hospital and she freely admitted that any award she received over the years had been because of the hospital. Meredith was the doctor because Bailey taught her. Meredith also wanted to make it up to Bailey and she couldn’t. Not now that everything was broken. Bailey still asked her to leave without fully hearing her out and if she had been calmer than maybe she would have listened.

But Bailey was hurt more than anything. She hated that a friend could do this to her and the hospital. She also never expected it would come from Meredith Grey. Bailey taught Meredith, she defended Meredith, and she always tried to under her. She just couldn’t do so now. Bailey was thinking about the bigger picture and she wished some of her doctors had been doing as well. Jackson had found a way around Koracick doing the surgery.

Jackson went to Amelia to do it. He didn’t want the surgery to be recorded and so he got a different doctor and he agreed to cover the cost of the surgery. He told the parents that he was doing this for them and that wasn’t true. He did it because he wanted to sick it to Koracick however Koracick had a point when he said the hospital needed this. Other doctors could see why and so why couldn’t Jackson?

Was he so arrogant that he didn’t care about everyone else’s job security? Schmidt thought so and he wasn’t alone. The doctors all had to start thinking about their futures. Owen did it and that’s why he was taking a job with Alex. It also helped that it got away from Koracick because he did technically assault him.

Meredith meanwhile had walked off work crew to go to the hospital and so now she has a summons because she violated terms of her parole. Meredith keeps breaking the rules and now there was no one to defend her. Bailey surely wasn’t going to do it. She has to run a hospital, deal with oncoming menopause, and it turns out she also has to deal with a pregnancy. She managed to get pregnant when it shouldn’t have even been possible.