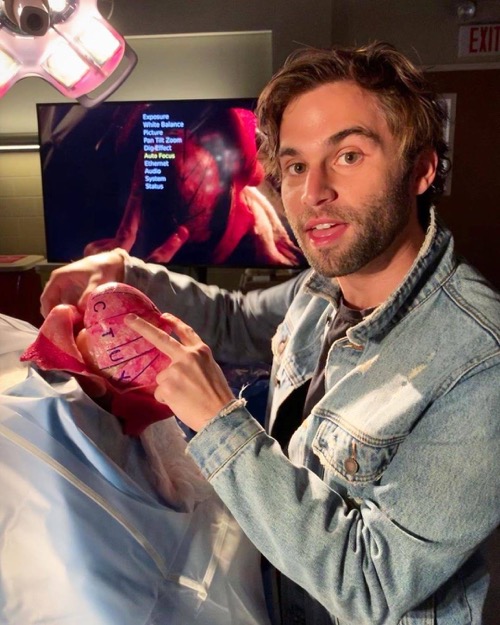 Owen and Amelia treat a woman who fell in the basement and quickly realize that there is more to the story; and Maggie is shocked to learn about some of Richard’s relatives who are seeking help.”

A surgeon is required above all to tell the truth. Unfortunately, said truth can be messy as Maggie found out when she talked to Catherine. Catherine thought Maggie and Jackson were still together. She even invited them to dinner with Richard as a foursome. Catherine was oblivious to what was going on and Maggie wasn’t inclined to tell her the truth. She knew that it would be a long-drawn-out mess. Its why she thought Jackson should be the one to tell his mother and they were arguing about when Maggie saw a young woman that looked just like her.

It was almost eerie. The young woman came to the hospital looking for Richard and so Maggie walked away from her fight with Jackson to find out what was going on. Maggie introduced herself to this woman and that’s when she was hugged out of nowhere. It turns out her long lost twin was actually her cousin Sabrina or Sabi for short. Sabi was Richard’s niece and she traveled with her dad Chris to go see Richard because she needed help. She had a mass that needed to be exorcised. It was a tumor and it should have been removed weeks ago.

Sabi found out about it three weeks ago. She had needed time to process it and so she waited on the tumor thereby allowing it to grow. By the time Richard had checked it, it had doubled in size. Sabi was now in serious danger and frankly, Maggie couldn’t lose her. Maggie has never had a relative that looks like her before. She also got along with Sabi so well that they were basically the same person with different life experiences. Sabi was also very outgoing. She overcame Maggie’s shy demeanor and the two were now friends.

Their relationship had been going so well that Maggie wondered why Richard had never mentioned anything. She asked him about it and he said his relationship with his siblings had always been fraught. The others had resented Richard for making a success of himself. They thought he was putting on airs and if it hadn’t been for Adele then their relationship would have fallen apart decades ago. Richard knew he should have made more of an effort when his wife died, but he told them about Maggie and their reaction was just so vicious that Richard didn’t want to subject his daughter to that.

Richard kept his distance because he thought that’s what was best for Maggie. Maggie didn’t see it at first and then she tried to offer her services for the surgery. Maggie got special permission to perform the surgery at Richard’s hospital. She thought Sabi would be excited that the best surgeon was on the case and surprisingly Sabi has some misgivings. She didn’t think a family should operate on a family. Maggie hadn’t seen that way because she just met them and so she tried to talk Sabi into coming around and was met with resistance from her uncle. Uncle Chris still has a chip on his shoulder about Richard being a doctor. And he accused of Maggie being just like his brother.

Chris said that they were trying to push their wants onto his daughter. He then demanded the second best doctor because he didn’t want Maggie anywhere near and his brother Richard came to agree with him. Richard didn’t think the family should operate on a family. He thought Maggie would feel differently if down the line she gets to know Sabi and so he didn’t want it to be weird. Maggie could be her cousin’s doctor or merely a cousin. She couldn’t be both. Maggie didn’t like being sidelined and she thought her father should have sided with her.

Maggie was just so upset that she didn’t even want to teach this second-best doctor how to do her surgery. Maggie was still hanging around the hospital when Meredith came to see Alex and they ran into each other. They talked about the tumor because it was a really good tumor. It was the largest Maggie had ever seen and that’s why she wanted to perform surgery on it. She was more upset about that than she was about Jackson. She and Meredith were talking about it when they also came across Amelia.

Amelia came to the enemy territory because she wanted to talk to Owen. She told him she was pregnant because it was going to become obvious soon and so she didn’t expect he would get weird with her. It was as if he was angry with her for being pregnant. Amelia didn’t get it and still, she tried to be on her best behavior with him. Owen needed help with a patient and Amelia was there for him. She talked to a woman he suspected had thrown herself down the stairs to abort her baby. The woman’s name was Cassidy. She worked two jobs and was already a single mother. She couldn’t afford another baby.

Amelia talked to Cassidy about her fears. She also got to the truth about how Cassidy fell down the flight of stairs. It turns out Cassidy kept missing her appointment at the clinic for an abortion and so she tried taking an herb she found out about online. She had doubled the dose of this herb and it made her dizzy. She ended up passing out and unfortunately, she was near the stairs. Cassidy didn’t intend to hurt herself because she would never do that to her son Henry and she also stated she would never hurt Henry.

Cassidy’s problem was her pregnancy. She needed a termination and Amelia said that it could be done at the same time as surgery on her abdomen. Only Owen said that they would have to wait on the abortion. He claimed that they had to clear the abdominal bleeding first and Amelia didn’t miss out on how uncomfortable he was with the situation. It didn’t stop Amelia, though. She made sure Cassidy had the abortion pill the first chance she got and she told Cassidy that it didn’t matter what her reasons were. She had a right to abortion no matter what her situation was.

Amelia also upset Owen with what she did. He thought Cassidy would come around in the end and so Amelia told him that not all women were like that. Sure, Amelia changed her mind but that was unique. Amelia got pregnant by accident and she chose to keep her baby. She didn’t think it would get to Owen like it did and yet he was upset. Owen said their marriage fell apart because Amelia told him she didn’t want kids and now she was having a child with someone else. And so, it felt like she merely didn’t want to have kids with him.

Owen later apologized for blowing up as he did. He knew he shouldn’t have put her on the spot like he did and she ended up explaining what happened. Amelia changed her mind in large part because of Betty and Leo. They made her realize that she was ready and so it felt right when she got pregnant. Amelia and Owen were always going to be a part of each other’s lives because of Leo and so they had to work on their relationship. The two of them were coming to an agreement just as Richard finally agreed with Maggie.

He thought Maggie should operate. He advocated for it and so Maggie performed the surgery. She did everything she could to save her cousin and ultimately it wasn’t enough. Sabi died on the operating table. The one relative that looked like she could be Maggie’s twin was now dead and Maggie blames herself for it.

Maggie’s pain was therefore doubled when she had to inform her uncle that his daughter was dead. Her uncle blamed her and he blamed Richard. Richard had to be there for his brother despite his brother pushing him away and so it was going to be a tough time.

And it didn’t help that Catherine found out about Richard and Gemma and tried to get rid of Gemma.