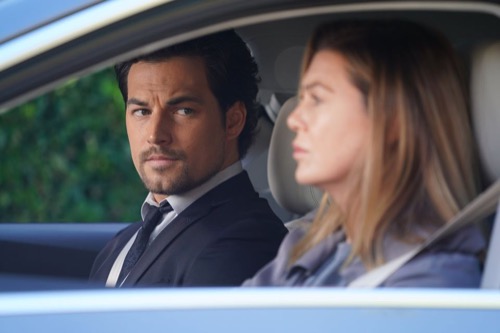 Meanwhile, the interns are put to the test as they fight to be the most successful in their respective cases.”

Most of the doctors went to Meredith’s hearing. They either wanted to be there to support her or they were testifying in her case. Then there was Bailey. Bailey was the one that filed the complaint against Meredith and so she had to be there. She had to tell repeat to them what Meredith did. She also wanted to know what was going to happen with her former protégé. Baily may not say it, but she still cares about Meredith. They were more than friends. They were family and they used to support each other through thick or thin.

Now, things were different. They were on opposite sides of the same case and what they planned to say there was also bound to drive away from the other. Bailey and Meredith were essentially battling it out in court. It’s unfortunate that most of their friends were there to watch and the only one that wasn’t there was Jo. Jo had to stay behind at the hospital because someone needed to run the place. She told the interns what she wanted from them. She even added how she didn’t want to be called until there was a disaster.

Meaning this was it for the interns. This was their one chance to prove themselves and no one wanted to be the person to blow it. The interns were all running around to prove themselves, but things were going badly back in court. Schmidt said more than he wished too. He told the panel how he was lassoed into becoming a human blood bank for a patient and he said he passed out in surgery. He also said he thought the name of the bracelet was a mistake. He was treating the patient, Gabby Rivera, with Dr. Grey and he thought it was a mistake when he saw the name read Ellis Grey written on her ID bracelet.

Schmidt even though he caused the mistake somehow. He went to Bailey because he didn’t want to be known for his mistakes and he thought maybe they could fix it together. He didn’t know that Grey intentionally committed insurance fraud. She put her child’s name on another child’s file because the little girl was poor and she couldn’t afford care on her own. Meredith thought she was helping the little girl when she changed the name on the bracelet. She also thought she was helping the many other times she flagrantly acted outside the law.

The hearing brought up a lot of old stuff. The lawyer, that was creating a case against Meredith, had been thorough. She mentioned everything Meredith ever did wrong and she also showed how the hospital protected Meredith. They covered for her when she almost lost custody of her adopted daughter, they downplayed how she killed a man with her fellow interns, and they even said it was in the past how she tried to ostracized DeLuca following his fight with Alex. There was a lot of evidence here that clearly states Meredith shouldn’t be a doctor.

Only Meredith wasn’t focusing on the case. She was paying attention to one of the doctors on the board and she was following his every action because that’s the man that killed her husband. Derek died needlessly. He could have been saved if Dr. Paul Castello had ordered a CT or perform a basic surgery. To have a man like that judging her had forced Meredith to snap. She shouted for the world to hear what Castello did and she had to be restrained by her own lawyer from going near him. And right after she had finished with him, Castello had a fit.

He might be epileptic or he might not. Either way, he was rushed to Grey Sloan where he received the best of care and Meredith threw in a quip about how he’ll need a CT. It was Amelia’s case. She brought into the patient and then she couldn’t perform surgery on him because she still hated him. Castello killed her brother. Amelia was never going to get over that and so she asked Koracick to perform surgery on Castello. He had a hemorrhage in his brain. Koracick needed to find the cause of it and then repair the damage.

Amelia watched the surgery from the sidelines. She had Linc with her and Teddy. They offered as much support as they could. Amelia watched the surgery as Meredith dealt with the rest. Her hearing was going to be postponed and luckily Alex stepped in to save the day. He showed off the many patients that Meredith helped save. He also said they came from all over to testify in Meredith’s defense and so they couldn’t postpone this hearing. They had to go through with it. Meredith’s patients got to testify and there was a statement from Cristina.

There were several statements from the many doctors that worked with Meredith. Then there was Bailey. Bailey talked to Richard and it reminded her of who she is as well as who Meredith is. Bailey then testified in Meredith’s defense and she said that Meredith deserves to keep her license. Bailey did it the only she knew how and that was by bossing the board around. She told them there shouldn’t even be a question on whether or not Meredith should keep being a doctor. She said to take the license would mean a death sentence for all the people Meredith could have saved.

Meredith ended up keeping her license thanks in large part to the many people that spoke in her defense. Bailey later rehired Meredith because she missed her and it turns out their friendship wasn’t dead. They were still family and sometimes families fight. Meredith also received even more good news. Castello was dead! He died in surgery and it wasn’t Amelia’s or Meredith’s fault at all. And so Meredith should have been celebrating, but her boyfriend chose that moment to break up with her and her sister Maggie was still falling apart.

And Schmidt was being ostracized now for being the one to rat out Meredith.