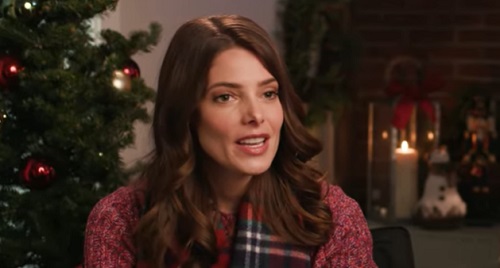 Hallmark Channel news has some great information to pass on about a new Christmas movie that you won’t want to miss. It stars Ashley Greene, who is best known for her role as Alice Cullen in The Twilight Saga. The movie is called “Christmas On My Mind” and premieres on the Hallmark Movies & Mysteries channel on Saturday, December 21st at 9pm Eastern.

The movie is about a young woman named Lucy (played by Ashley Greene) who suffers a fall then wakes up with amnesia. Since she’s got a wedding dress in hand, she believes that she’s late to her wedding with her ex-boyfriend Zach (played by Andrew Walker).

Turns out, she has no recollection of the past two years, nor that she’s currently engaged to another man. But with Zach’s help, Lucy sets off on an adventure to fill all the gaps in her memory, and in the process old romantic feelings reignite during the Christmas season.

Andrew Walker plays the male lead in the movie. You might remember Andrew from his roles in previous Hallmark Channel movies, as well as in various TV series, such as Maybe It’s Me, Sabrina The Teenage Witch, and Hot Properties. Another World alum and TV veteran Jackee Harry also stars as Dr. Caroline Albright.

In the behind-the-scenes feature for “Christmas On My Mind,” Ashley Greene spoke at length about her character and the struggles she faces. “My character Lucy has a spill and loses her memory,” she said. “And so now she’s kind of in this limbo world of having these feelings from two years ago but realizing that she has this whole other life that she’s trying to figure out, and in this life she’s now engaged to someone else.”

And of his character, Andrew Walker had the following to say: “Zach’s life is going pretty well, he’s in a brand new relationship, and all of the sudden Lucy shows up.”

As Ashley explained: “Zack is a key point in Lucy being able to remember everything that’s happened before and how she got to the point she’s at….and him helping her remembering things, she’s in turn reminding him why he loved Christmas so much. And why he loved her so much.”

“Christmas On My Mind” was written by Kristen Hansen and is based on the novel by Denise Hunter. It certainly sounds like a great story that the whole family can enjoy, with some romance and holiday spirit thrown in for good measure.

“I think viewers will love this [movie],” Ashley said. “I think it’s going to warm their hearts. Hopefully, we remind people to do the things that are important with your friends and family.”