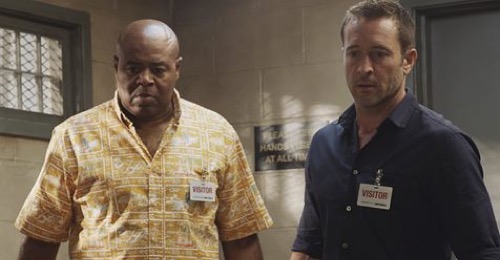 Tonight on CBS Hawaii Five-0 air with an all-new Friday, February 1, 2019, episode and we have your Hawaii Five-0 recap below.  On tonight’s Hawaii Five-0 season 9 episode 14 “Depressed with the Heat of Kealwalua” as per the CBS synopsis, “While investigating Flippa’s friend’s murder, McGarrett and Grover uncover a deadly plan by an extremist group on the Island. Also, Grover has an emotional reaction to the case.”

Flippa’s friend was murdered while the two of them were on the phone. His friend Luka Palakiko was supposed to meet him for their set because they were playing a small venue, but Luka had been running late and so Flippa called him. Luka had told Flippa not to panic because he was in the parking lot and was unloading his drums. This was the last thing Luka ever said to Flippa because the next thing he heard was a thud and the sound of the phone falling. He thought that Luka had dropped it when he was unloading and so he didn’t realize anything was wrong until he went out to the parking lot to see what was taking Luka so long.

Luka had been murdered. His killer took his wallet and his van, but something about the crime scene didn’t seem right to Flippa. Flippa said that Luka would never have fought in a mugging. Luka loved life too much and he would have happily handed over his valuables. He didn’t need to be killed and so Flippa suspected that robbery wasn’t a motive. He told McGarrett what he thought when the police came and McGarrett chose to believe him. He knew that Flippa wouldn’t have lied about something so important and so he had the team investigate Luka’s death as the event while the stolen items were to cover up what happened.

The fact that Luka was stabbed nine times also confirmed their theory. His killer was angry when he killed Luka and the only evidence they had was a piece of long blonde hair found on the victim. Luka, it seems working as a family therapist when he wasn’t playing gigs and he’s been sending money to a teenager. This teenager was identified as Annie Kehr and the team had thought Annie was in an inappropriate relationship with the Luka. They went looking for Annie and she wasn’t with her family, but she was found at the airport. Annie was taken back to Five-0 office and they dealt with her as well as her lawyer, Jill Yamada.

The lawyer hadn’t been hired by the family, but it seems she had been hired by Luka who wanted her to look after Annie. Annie and Luka weren’t in a relationship. Luka was gay and so was Annie. Her family wanted to send her to conversion therapy in Iowa and so Luka was helping her get away. He paid for her legal fees and was working with Yamada to get Annie emancipated. She had also been at the airport because she was flying to a sanctuary home in Maui. Annie dreaded going back to her parents and unfortunately, her emancipation wasn’t going as planned. No one believed she should be separated from her parents because most of the adults think her parents were only doing what was best for her.

Luka knew differently. He was a counselor for LGBTQ Youth and he moved to protect Annie, but her parents were still her current guardians and so Five-0 tried to keep them separated as they investigated Luka’s murder. Everyone thought he was murdered by parents like the Kehrs or the Kehrs themselves. They didn’t suspect anything else until they learned that his car had been found and that it was traced back to someone that just got out of prison. The guy that killed Luka was Connor Russell and the team didn’t know if he had been hired to do the job or if it really had been a crime of opportunity.

They went to Russell’s home and the man, as well as the van, were gone. He did have computers though and so Jerry reached for one when it exploded. Luckily, Jerry was fine but the team had the bomb squad search the rest of Russell’s home and it turns out Russell has been playing with explosives. He had bombed his computer ensuring no one could go without him and there had also been a residue of a much bigger bomb. Russell was planning a mass casualty event and the team ended up believing that he stole the van as a way to carry out his plans without it leading back to him.

The team needed to know where Russell would target and so they talked to his cellmate in prison. The team remembered Roger Barton and he remembered them, but the Roger they met said he’s changed. He claimed to have found God in prison and he said that he was only one that Russell spoke to. Russell had been too shy for prison and so he stayed in his cell most of the time. Russell had told Barton that he had been bullied at high school and that made Barton believe that Russell was harmless. Only the team told him what they found and that they believe Russell to be a bomber in the making.

Barton said that didn’t sound like Russell and he said maybe Russell’s experienced a mental breakdown. Russell’s father was allegedly a paranoid schizophrenic and so Barton said maybe the family’s demons manifested, but that had been a misdirect. The team later found a video on Russell’s computer that indicated he was cleansing the world of minorities and that he was part of the Alt-right. He had left a video to be delivered in the aftermath of the bombing and he had used quite a few big words for someone that dropped out of high school. It didn’t seem like Russell was working on and so they searched the speech pattern. And it led back to Barton.

Barton had hidden the fact that he was part of the Alt-right because he knew he wouldn’t be safe in a prison in Hawaii, but he had used his close connection to Russell to convert the young man and so Russell was going through with the bombing in order to prove himself to his mentor. The team went back Barton and while he wasn’t going to give him answers – they did find his burner in his cell. Barton and Russell had been part of something much bigger. They had planned on bombing five cities and the first was to plan for Hawaii. And they talked about it on a message board with others.

Russell had planned on bombing a community center full of children and he had changed vans. No one knew which direction he was coming from but that sat on the center and then moved on Russell before he could reach the detonator. It had been a close call and it had brought up some ugly memories in Lou’s past, but they stopped the bombing and they got justice for Luka. Luka had been killed for his van and the fact he was a minority. It was simply wrong place wrong time and so the team finished what they started. They got Annie Kehr away from her parents and she was going to be safe now.