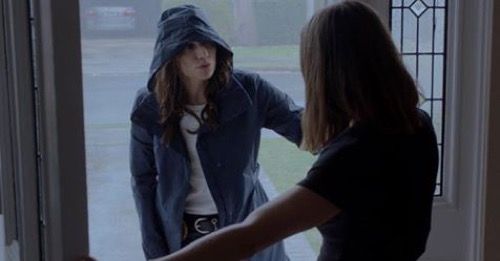 Tonight on CBS Hawaii Five-0 air with an all-new Friday, February 15, 2019, episode and we have your Hawaii Five-0 recap below.  On tonight’s Hawaii Five-0 season 9 episode 15 “Ho’opio ‘ia e ka noho ali’i a ka ua (Made prisoner by the reign of the rain)” as per the CBS synopsis, “As a dangerous hurricane hits Oahu, Five-0 is tasked with protecting El Diablo, a captured serial killer who is being hunted by an assassin. Also, Tani’s civilian safety check during the storm turns deadly and Rachel and Charlie evacuate to Danny’s house, where the ex-spouses reminisce.”

A hurricane was heading towards the island. The team’s office was going to be used for storage because whole the building had been designated as a relief center and so the last thing McGarrett was expecting was a call from the FBI, but it turns out their fellow law enforcement needed their help. The FBI was transporting a criminal. They had the infamous Alejandro “El Diablo” Vega in custody and it was their job to transport him to a supermax prison. FBI Special Agent Sam Collins said that his people wouldn’t be able to make it to the prison what with the weather kicking off and so he asked to house this particular criminal at their personal jail space. The FBI had needed somewhere secure to lock in the prisoner because he was famous for escaping.

Vega has escaped four times. Two of his escapes happened as he was being transported and so no one wanted a repeat. The FBI wanted to lock him up in Five-0’s icebox and McGarrett agreed to it for his own reasons. It seems he knew someone that had been killed by Vega and so he took the assignment despite all the reasons not to. Like how dangerous it was going to be. McGarrett and his people had to keep everyone from roaming around the building because they couldn’t risk one of working for Vega. Vega was one of the most wanted men in the world and he earned his nickname because people truly believe he was working with the devil to collect souls. He’s killed hundreds of people and it was time he finally paid the price for all the pain he caused.

But there were also all the reasons why Vega shouldn’t have been allowed into the building. Besides just the possible partners, there were over a hundred people that could get caught in a struggle and end up as collateral damage. Nevermind those that could be used as hostages! So something was bound to happen. The first thing that happened was that the building experienced problems with their electricity and they had to manually check on their prisoner. They found Vega still in his cell but someone had stabbed a police officer and they took his gun. This armed intruder was lurking around the building and so right then was the worst time to be understaffed. The team was missing three of their own with both Tani and Junio going from house to ensure everyone evacuates in time.

Danny was also out of the picture because he had to check on his family. His daughter thankfully had a school trip in California and so she was out of the way of the storm, but Danny had his son Charlie and his ex-wife at his house because they had needed to be evacuated from their own. It was great for Danny because he was flirting with an ex and it sucked for everyone back at headquarters because there was a man roaming around ready to pick them off one by one. The guy had even ditched his persona with the fake glasses and was just out there killing people. Things did turnaround some when Jerry remembered seeing a man with a cartel tattoo and so he was able to trace the tattoo to the man himself with his database.

Their mysterious killer wasn’t a friend of Vega’s. He was from a rival cartel and had been sent to kill Vega. Vega had made a deal with the FBI and he going to help them catch several criminals just like him. The FBI hadn’t wanted to reveal this information because it was a need to know, but they had to tell the team with an assassin in the building. McGarrett didn’t like it only he was willing to keep Vega alive if it meant other dirtbags would go to jail and so they checked on Vega. It turns out someone released a deadly gas directly into his cell and it was a good thing McGarrett was there to help get him out. He and Collins were taking Vega back to McGarrett’s office when someone asked how did the assassin know which room to poison.

McGarrett suspects Collins’s had a mole. Collins was coming around to the idea when they were attacked coming out off the elevator. The assassin took down Collins and two federal agents before McGarrett was able to kill him, but by the time he checked on Vega, Vega was gone. Vega tried escaping throw the parking lot and was found by the dirty fed that wanted him dead. Thankfully, McGarrett saved his that time as well and also threw in congratulations on Vega’s last attempt to escape. The team rode out the rest of the storm and Vega was transported like expected. It was a better outcome than at Danny’s house where nothing happened besides the little flirting and so it had been awkward. It made was even more so when McGarrett came by and asked the family how they spent the night.

Charlie had had fun because he considered it was one big sleepover, but Rachel and Danny took one step forward and two steps back.

Tani meanwhile took down a local gang of drug dealers on the island and so it turns out evacuation duty was more work than anything.