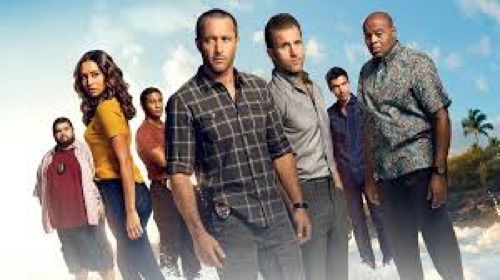 Tonight on CBS Hawaii Five-0 air with an all-new Friday, March 8, 2019, episode and we have your Hawaii Five-0 recap below.  On tonight’s Hawaii Five-0 season 9 episode 18 called, “Ai no i ka ‘ape he mane’o no ko ka nuku. (He who eats ‘ape is bound to have his mouth itch)” as per the CBS synopsis, “Tani and Junior go undercover at a gym to track down a deadly batch of steroids that’s killing users, before the drugs claim any more victims.

Also, Danny and MacGarrett sub as bodyguards for Danny’s high maintenance ex-mother-in-law, Amanda Savage (Joan Collins), a wildly famous romance novelist with whom he has never gotten along.”

Danny finally called in his biggest favor from McGarrett. He asked McGarrett to assist with a protection detail and that had seemed like nothing to McGarrett. He didn’t understand why Danny would risk calling in the biggest favor just to protect an author because he had never met the woman in question and had no idea how much of a handful she was. Danny, on the other hand, has been roped into her detail for years because she always asks for him and so the two guys were in for a headache, but their rest of their team was dealing with a case. Five-0 had learned that their victim Brad Chen had been standing in the middle of the road when he had gotten hit by an oncoming truck and that if he wouldn’t have died even if he hadn’t gotten hit because of the drugs in his system.

Brad Chen used to take steroids. It wasn’t something to him and so there was no explanation for why more than the cautionary amount was found in his system. He either made a fatal mistake or someone messed with his steroids. Brad was heading for a massive cardiac arrest when he died and so the team was looking at a potential murder. Five-0 went about the case by first talking to Brad’s father. Mr. Chen was not aware of his son taking drugs and despite that, he wasn’t quite shocked. He said that his son had been looked at by the pros and that it had gotten messed up when he became injured. He hadn’t recovered the whole way and so he came back home to get healthy as well as do some rehab, but with the pros on the line and wanting to get back what he lost, he could easily have turned to drugs for the extra help.

Still, Mr. Chen didn’t know about the drugs or how his son could have gotten them and so he gave the team permission to search his son’s things. They found several vials with letters listing the days of the week on them and so that’s how Brad kept track of his drugs, but they also found several blood bags in the mini-fridge. It was Brad’s and it wasn’t used in any kind of special treatment. If it had then it would have been found in Brad’s system and it wasn’t. Him hoarding his blood was used for something else and so Jerry speculated the victim might have belonged to a vampire club. It would explain the blood. Except no one was willing to chase that theory and so they focused on what they found. They tested the vials and it seemed all of them had been contaminated. And so more people could be at risk of dying if they took the steroids.

The team had to find the supplier. They checked where Brad spent most of his free time and it seems he spent it at the gym. The team sent in Tani and Junior to go in undercover. The two pretended to be a new instructor and a workout fiend. Junior played the fiend and it was hard getting guys to talk to him because people began questioning if he was just trying to flirt really badly, but Tani found a source. She talked to her fellow instructor and learned that the guy that drug connection was someone named Derrick. Now Derrick hadn’t appreciated Junior asking him about drugs on his first day at the gym and so he tried to jump him in the parking lot with some friends.

Junior was able to take down all of them and he arrested them for assaulting a police officer. The ringleader caved first and he said the main supplier of the drug was someone named Moses Pacheo. Pacheo was, unfortunately, dead by time Five-0 caught up with him and it turns out he had been caught in roid rage by the police when he suddenly collapsed from a heart attack. But the rage and the cardiac arrest had shown that Pacheo was also killed by the tainted drugs. In fact, he was the intended target all along. The team found evidence that Brad stole Pacheo’s drugs and so Pacheo received two batches of this contaminated drug. And he also had a bunch of blood bags in his fridge as well.

The team checked what Pacheo was into and it seems he was trading the blood of healthy young man in an exchange of pharmaceutical grade steroids. The doctor that Pacheo had been working with had also recently regained his medical license. Dr. Niles Werner was not better than a snake oil salesman. He convinced people that he could help them not age by giving them blood treatments and so he relied on Pacheo, but Pacheo was demanding more and more money over time. It had gotten to the point where the doctor didn’t want to pay off Pacheo anymore and that’s when he tried to kill him with the drugs. The first time hadn’t worked and so he tried again with his second attempt which did actually kill Pacheo. And so for a man doing so much to get away with murder, he shouldn’t have attacked Tani when the team came to arrest him.

Tani was injected with the steroids and Junior had stayed behind with Adam to treat her, but Lou went ahead and shot the doctor before arresting him. So they had the culprit in custody when Tani was revived.

But McGarrett had loved protection detail. He thought Danny’s former mother-in-law was a hoot and couldn’t understand why they had such a difficult relationship until he saw it for himself. Danny and the famed romance author Amanda Savage were horrible to each other. She put down everything Danny did or said and that’s how its always been since Danny started dating Rachel. Rachel’s mother had thought Rachel was too good for Danny and she never hid the fact. It wasn’t until they got into a huge argument about it now that Amanda apologized for her behavior. She said part of the reason she hadn’t liked him dating Rachel was that he reminded her of how she grew up. She had humble roots and she didn’t want to be reminded of that time. And so she apologized for holding that against Danny.

And Amanda also asked that if he was going to date Rachel again that he be a little more careful with her heart.