BY Kristine Francis on May 3, 2019 | Comments: Leave Comments
Related : Uncategorized 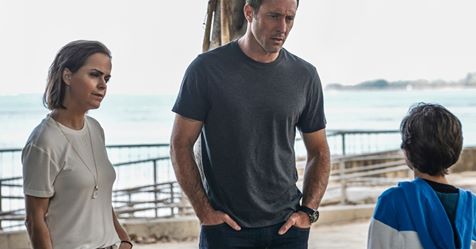 Tonight on CBS Hawaii Five-0 air with an all-new Friday, May 3, 2019, episode and we have your Hawaii Five-0 recap below.  On tonight’s Hawaii Five-0 season 9 episode 23 called, “Ho’okahi no la o ka malihini” as per the CBS synopsis, “While McGarrett helps his visiting sister, Mary (Taryn Manning), spy on her shady neighbors, Five-0 investigates the murders of a ride-share driver and his passenger. Also, the team teases the youngest members of Five-0 when Junior escorts Tani to a wedding”

McGarrett’s sister Mary came for a visit. Her daughter was on her first ever Girl Scouts trip and so Mary thought it would be nice to take a little vacation as well. She came to the island hoping to relax and of course, things didn’t go as planned. McGarrett got upset when her, for one. Mary decided on renting an Airbnb and she offended him when she didn’t want to stay at his house. He adopted a cat that he knows she’s allergic to and somehow it’s her fault that she didn’t want to sneeze every minute. She likes her rental and she thought it was nice though McGarrett did some research on the property and he questioned her on why she hadn’t gone after someplace with better reviews. And so McGarrett was clearly upset because he felt like his sister didn’t want to spend time with him.

Only it wasn’t Mary that was checking in with the office on his day off. Five-0 was investigating the murder of Sam Pukahi who was a driver for the “Coast” rideshare app and the man had thankfully had security cameras. His last call that night had been with someone named Carter Hill and the ride had been over when suddenly Hill’s demeanor changed. He came back into the car and pulled a knife on Pukahi. Pukahi was taken a hostage and forced to drive out of the way. The two men made a stop and both got out of the car where the video ended, but Pukahi was killed and so was Hill. They were both shots twice in the chest and the assailant had at least left Pukahi out in the open while Hill was left in the trunk of the car.

No one could figure out how this went from a hostage situation to both ending up dead, but that’s what happened and so they first looked into Hill. Hill was middle management at a statistics research company and he was in town for a conference. The man was boring on paper and a lot livelier in his final hours. There had been drugs in his system and so it was believed that maybe he went out partying. He would have been loud and possibly bragging about himself. Which could have left him prey to some bad people that thought they could use him. Hill was renting a motel room and so the team checked there to see if they could find anything in his bags. And while they didn’t find any bags, they did find a lot of blood.

Again, this made no sense. Hill died in the trunk of a car and that’s where all of his blood went and so they don’t know where the blood in the motel room came from but they do know that Hill had partied all night. He slipped out of the motel when none of his friends were looking and he went bar-hopping. Hill bought himself a few drinks and he also bought drinks for other people at the bar. He was really friendly. Hill wanted to be everyone’s best friend that night and he only quieted down when he met a woman. Kira Pang was pretty and smart. She was friends with the bartender and liked hanging out there. She also didn’t fall for just anyone and Hill won her over by making sure the jukebox played her favorite song on repeat.

Kira and Hill were still talking when her friend left, but the friend did mention that Kira knew how to take care of herself and that she walks around with a gun in her purse. The team found out what type of gun she had and it was the same one used on both Hill and poor Pukahi. It was also clear that the blood at the motel was Kira’s and so the team began piecing together what happened. Kira and Hill hit it off at the bar and got back to his motel room. Something happened and Hill thought he killed Kira. He then took a rideshare hostage and forced the driver to go around finding the best place to dump the body, but it was until they stopped the car that both men found out that Kira was still alive.

Kira kept her gun in her bag. Her bag was most likely thrown in after her because Hill wanted to erase any evidence that she had been in his room and so it wasn’t until the trunk opened again that Kira used her weapon. She pulled out her gun and killed the men she thought abducted her. Kira was weak from blood loss and disorientated. She ran into the woods trying to escape and so Five-0 went in after her. They used dogs to track her scent and she had almost made it back to civilization, but she must have lost her balance and she tripped over the edge of a cliff. She was hanging onto a small tree and she couldn’t hold on much longer. Someone had to go after her and Junior volunteered to go.

Junior couldn’t use hiking equipment to get to her because the cliff wasn’t strong enough, but he just climbed down there and was able to help her. Kira was rescued and she was so traumatized after her experience with Hill that no one was going to blame her about the driver. It was just unfortunate. The team was glad to have solved the case and rescue Kira in time. Except they hadn’t been the only ones to close a case. McGarrett and his sister Mary couldn’t stay out of trouble because they figure out her next-door-neighbor at the Airbnb was a drug dealer and so they worked together in shutting down a meth lab that cropped in suburbia. And working a case had helped Mary because her self-esteem took a hit when an ex-boyfriend ghosted her.

And while no one may have noticed it earlier, Tani realized she has feelings for Junior and so going to a wedding together as friends didn’t go as planned.