BY Kristine Francis on May 10, 2019 | Comments: Leave Comments
Related : Uncategorized 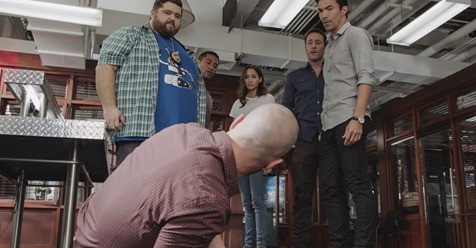 Tonight on CBS Hawaii Five-0 air with an all-new Friday, May 10, 2019, episode and we have your Hawaii Five-0 recap below.  On tonight’s Hawaii Five-0 season 9 episode 24 called, “Hewa ka lima (The Hand is at Fault).” The synopsis as per CBS,  “Fugitive hacker Aaron Wright resurfaces to ask Five-0 for help when his co-workers at the NSA, which he has been working for, are all murdered. Also, Junior speaks at the parole hearing of the drunk driver who killed his sister.”

Aaron Wright sought out Tani. No one from Five-0 has seen him since he broke out of police custody and so it came as a surprise when he reached out to one of them. They knew he was responsible for the death of a friend and they would have arrested him on sight, but he knew that when he went to Tani. He had the chance to kill her before and he let her live. Wright was hoping that Tani would return that favor by helping him because he got himself into some trouble. He was on the run for a while before the government caught up to him and offered him a job. Wright agreed to work for the NSA as long as he received full immunity and so he got to enjoy doing what he loves as well as remaining free. His job was to commit acts of war on a daily basis. He would hack foreign government and disrupt wherever he could. And he had no problems until one day assassins showed.

A three-man team came to the building and Wright had held the door open for them because he had no reason to doubt they didn’t know about the NSA offices, but they used him to get to his floor and then killed his whole team. Wright only barely escaped with his life. He knew he couldn’t go back to the NSA because he would be a suspect and so he went to Five-0. He wanted their help in clearing his name and he also wanted protection. The assassins had seen his face and he had seen theirs. Wright didn’t want to die and he knew that Five-0 would get to the truth just because it was them. They wouldn’t care about Wright, they would care about national security. They went to Wright’s office and they ran into the NSA. The people there claimed that they were simply doing surveillance at that location and so right from the start they got on McGarrett’s bad side.

McGarrett doesn’t like liars. He would have respected the federal agents if they had at least been upfront with him and so if they weren’t going to assist then he wasn’t going to tell them about Wright. Wright was at Five-0’s headquarters. He was being watched 24/7 and McGarrett wasn’t interested in turning him over. He first wanted to know what was going on at that NSA site. He and his team investigated everyone that worked there and they spotted a red flag. They found out that one of the agents had been dirty. This federal agent was using his job to spy on everyday Americans and was collecting blackmail on them. He would find something incriminating and then threatened to expose these people if they didn’t throw a couple of thousand dollars his way. And this plan was working until he found something big.

Big as in big, big. The agent sent up an account in Zurich and was wired three hundred thousand dollars from Alan Kinross. Kinross was the CEO of a medical device manufacturer and whatever the agent had on him could be anything from the personal to a corporate scandal. The company and its CEO has to answer to a board, but that also meant most of their documents were secure at an offsite location and so Five-0 chose to break in. They relied on Wright’s tech skills to get them through security and he helped cover for them more times than they would have liked. Jerry for one was disgruntled because he remembered Wright killed his friend Toast and so he really didn’t want to have to owe the man anything. And yet Wright was the one that ensured they got what they wanted from the data server.

The team learned that the company Cyrolaris had developed a prototype that killed three people during testing. The device should have been destroyed afterward, but the CEO went ahead with producing it for the mass market and his company has since made billions from the sale. It was both illegal and unethical. This was what the agent found and blackmailed the CEO over. The CEO then wired the money because he wanted to trace it and once he did he managed to go after his blackmailer. The team of assassins was there to ensure this scandal never got out and they were still looking for Wright. One guy was killed breaking into Wright’s apartment and the others were spotted nearby hoping to catch sight of Wright. And unfortunately they were well-armed, so it took the entire team to bring them down.

Once they did bring down the assassins, the next part was easy. They traced calls from the assassins back to Kinross and that along with what they had on the killing device meant Kinross was going away for life. It also meant that Wright was in the clear. He was given the same contract with the NSA as before and so he’ll still have to work for them or risk going to jail, but he claimed he didn’t mind it. He said he liked going back to his protected job and he thanked Five-0 for all that they did for him. None of the team were going to forgive him anytime soon for what happened to Toast and so Jerry was still wary of Wright when he decided to do some digging. He found the money that Kinross sent and he realized that it was rerouted to pay for the assassins.

It turns out that Wright had hidden behind the blackmail scheme to kill everyone in his office and steal billions worth of information from the NSA. He then made it look like it was Kinross because he wanted to be cleared before he made his escape, but Jerry caught on to what he was doing and he tried to warn the NSA in time except it was too late for Wright’s handler. Wright killed everyone that knew what he was doing at the NSA site and he was now free to hurt as many as he wanted.