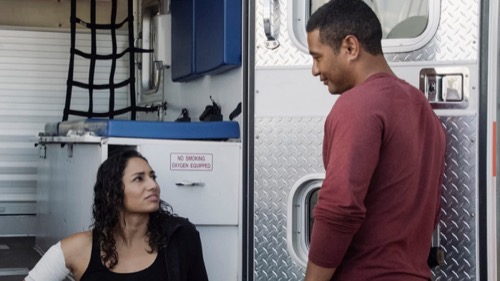 Tonight on CBS Hawaii Five-0 air with an all-new Friday, October 11, 2019, episode and we have your Hawaii Five-0 recap below.  On tonight’s Hawaii Five-0 season 10 episode 3 called, “E uhi ana ka wa i hala i na mea i hala,” as per the CBS synopsis, “Five-0 investigates when a plane that mysteriously crashed into the Pacific in the ’80s is found, but with a recently murdered scuba diver inside.  Also, as MacGarrett and Quinn zero in on who planted the bomb in his garage.”

Sergeant Quinn Liu was assisting McGarrett with his investigation into that bomb. You know the ones that were left at his house. McGarrett’s dog Eddie was trained to sniff out bombs and so he recognized the threat before McGarrett, but now McGarrett was going after the real threat, He suspected a man he arrested had been behind the bomb. He also knew how crazy it was to go after Mr. Cullen without evidence so he enlisted someone just as crazy as he was to help. And Quinn was that person.

Quinn was basically the female version of McGarrett. She went along with his half-baked plan of provoking Cullen and they followed Cullen from there. He met up with someone at the airport where they knew no one could listen in, but it also meant neither Quinn nor McGarrett could hear their conversation. The two had no idea if Cullen was panicked or if he was gearing to give murder another go. Quinn and McGarrett were doing their best to gather information and the rest of them were working on a genuine case.

The team was investigating the murder of Jay Kahale. Kahale was a diver and he was found murdered near plane wreckage. The plan was Flight 912. It was practically legendary because it went missing in 1983 and no one knew whatever happened to it, but a few days ago it was found by a private company. The company was willing to bring it back up to shore so everyone in the world knew that this plane had finally been found. But Kahale wanted to get to the plane first. He dived down there with a partner and only his partner came back up.

This same partner would then steal his boat to make it back to shore before setting in on fire. The partner clearly didn’t want to be found and so the team figured not only was his their killer but that he must have taken something with him. They thought it was the black box. There were a lot of theories out thereby why the plane went down and a black box could have given a clear answer. The team even followed this theory up this up by interviewing all the “fans” of Flight 912. They spoke to a millionaire who admitted he was out there and just wasn’t dumb enough to do this.

He then points them towards another nut job. Some guy that went by the name of Delphi Son and this guy was so obsessed with Flight 912 that he offered contradictory theories of why the plane went down. There was the popular one about the military accidentally confusing the plane with a missile and the usual one about aliens. It was the military one however that gave Adam pause. He believed that maybe the military was hiding something. It could explain why no one found the plane in almost forty years.

The others had laughed at Adam for raising the question. They thought it made a sound a little too much like Jerry and they were laughing some more when the black box was found with the plane. The only thing that seemed to be missing was the passenger in 4C. Someone had removed the seat and so the team checked who was sitting there. The passenger’s name was Ron Ennis and his brother Joe was a huge advocate for finding out what happened. Joe even spoke to Lou and Tani about how much he still misses his brother.

What Joe failed to mention was that he was Delphi Son. He was constantly creating new conspiracies online and it didn’t seem like it was done out concern. The team looked into Joe. They learned that he cashed out half a million dollars and so the team believed he paid Kahale to steal whatever his brother put under the seat. And about that. Ron Ennis was New York for one day and on that day someone stole an heiress’s jewelry which was worth about 4.1 million dollars.

The team also found out that Joe must have been in on the theft. Joe Ennis worked out of the Hawaii branch of the insurance company that the heiress used and so the brothers came up with this one together. The plan was to steal the diamonds and bring that back to Hawaii. But then the plane went down. Joe has been trying to get those diamonds back ever since and he paid someone to get to those diamonds before the salvage company. And then Kahale hired someone that was untrustworthy.

Kahale was betrayed by his partner. The same person that everyone talked about as if they were a man and it turns out it was a woman. Kahale only ever worked with one underwater welder. Her name was Sara Brown. She betrayed Kahale and so Joe had been apprehensive about meeting with her. He brought a gun, but so did she and she got the drop on him. Five-0 found Joe bleeding out by the time they got to Sara’s. The team pursued Sara and Tani was able to subdue her. And just when they thought they closed the case, they found out the black box from had been wiped.

Who knows, maybe it really was the military?

McGarrett hadn’t gotten credible on Cullen, but he liked working with Quinn and he offered her job with Five-0.

And right when she was going to give him an answer, Military Police showed up and arrested her and McGarrett believed it was Cullen who did it.

But then who bombed Cullen?