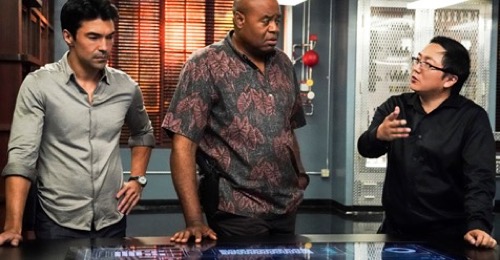 Tonight on CBS Hawaii Five-0 air with an all-new Friday, October 25, 2019, episode and we have your Hawaii Five-0 recap below.  On tonight’s Hawaii Five-0 season 10 episode 4 called, “Ukuli’i ka pua, onaona i ka mau’u” as per the CBS synopsis, “It’s Halloween and Five-0 investigates a home invasion turned deadly after a dangerous “monster” escapes from the basement. Also, Max returns to Oahu with a very special guest.”

Flippa was throwing a Halloween party. He invited everyone to the party and most of the partygoers were coming after they finished passing out candy. But there was also an expected guest that was there as a surprise for everyone. Max Bergan came back from his Doctors Without Borders mission to see his friends and introduce them to his adopted son. Tunde was a cutie. He came dressed as John Wick 2 to Max’s John Wick 1.

Only before Max could introduce his son to his friends, the team caught a case. They were called to the scene of a double-homicide and it was a little unusual. The first victim was an elderly woman by the name of Edith. Edith owned the house and she was killed by a couple of thieves because they found out she had a vault in her basement. It wasn’t until after they killed her that they learned this “vault” was empty of either jewels or cash.

It did, however, house a person. Edith was keeping someone prisoner in this vault and the thieves released him or her. The person broke out and killed one of the thieves. They also seemed to have pursued the other house of the house and so the team has no idea where this prisoner or the other accomplice could be. The team was doing their best to track down both as well as identify who Edith was holding prisoner.

The team also caught another case while they were at it. They were called to HPD where a victim’s body disappeared from the morgue and this time one of their own was directly affected. Noelani was pretty shaken up. She blames herself for the body of Lana Nakua being stolen and she wasn’t being fair to herself. She left the body because the lights went off and she had heard something. She thought someone was in the basement with her.

The lights were eventually switched back on. So, Noelani returned to the morgue and saw the body was gone meaning that there was another person down there. It whoever she heard that stole the body. Noelani couldn’t see that far ahead because she felt like she should have stayed in the dark on Halloween of all nights and that’s crazy. She would have been scared out of her mind down there. Plus, who knows what the body snatcher would have done if confronted.

McGarrett tried to get Noelani to see that she wasn’t to blame for what happened. He told her that they would catch who did this and that they would get the body back. He just didn’t know that he would to reopen a seemingly closed case. Lana Nakua was eighteen when she died. She disappeared from a frat party and was never seen again. There were three suspects in her disappearance, and they were all guys from the fraternity.

McGarrett and Junior went to one of their addresses. They found their suspect dead and written in his blood were Lana’s initials. Neither of the two knew what was going on, but they tried a second address and they found the same problem. They found the suspect murdered and Lana’s initials were scrawled on any flat surface possible. The killer was clearly escalating. They wanted to show that they were doing this because Lana and more than that they frightened these men.

The guys were killed like how Lana was killed. They were tied up and suffered a blow to the back of the hand. The third suspect was could have been drowning as far as the guys knew and so they had to find him before the killer did. They checked the hair they found on one of the victims and it belonged to a familial match for Lana. It seems her sister Emily has been the one hunting down Lana’s killer. Emily wanted revenge. She had gotten close to killing the last man involved with her sister’s mother when McGarrett found her. He arrested and Junior ended up saving the guy’s life. And better yet they found Lana’s body and so there will be justice for the young woman.

Also, things were heading up with the Edith case. Edith was a nun for twenty years and she gave all of that up one day to go live in the modern world. It was believed she did so in order to lock up her prisoner. Edith has books on exorcisms and she probably believed her prisoner was devil if not the son of the devil. Which begged the question who was this prisoner to her. The team first thought the prisoner could be her son and that wasn’t possible because she had a hysterectomy.

Then they found their accomplice. He checked himself into the hospital because he said a demon had been following him and so the team checked street cameras from their area. They spotted their prisoner/demon out on the street. Both Tani and Quinn had tried to him and in the end, they were forced to wound him because he didn’t know that they were trying to help. The guy seems to have been locked up for almost thirty years inside that cell and so there’s no telling what psyche looks like now.

The women, though, spotted something in their mysterious victim. They saw he had two different color eyes and the guys remembered seeing a nun like that at the convent. She was the Mother Superior. It turns out she gave birth to Kimo after an indiscretion and she asked Edith to drop the baby off at the hospital. But Edith didn’t want to give up the baby. She went back to the outside world and she raised the child as her own. She tried to do her best for him and unfortunately that wasn’t enough because he looked different.

He suffered from a rare disease that meant the world was going to be cruel to him. So, Edith put him in that cell because she tried protecting him from the world and sadly that didn’t work either. She was killed and Kimo was hurting now. The police later found him in a park and he was so scared that he would have tried attacking them if it hadn’t been for Max. Max felt for Kimo. He knew what it was like to be different and he didn’t hold that against the man. He also brought Kimo’s biological mother with him and she was able to talk him down before he could hurt himself further.