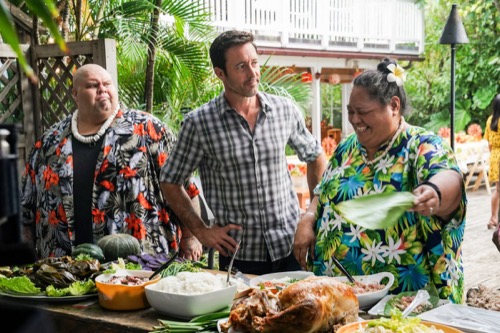 Tonight on CBS Hawaii Five-0 air with an all-new Friday, November 22, 2019, episode and we have your Hawaii Five-0 recap below.  On tonight’s Hawaii Five-0 season 10 episode 8 called, “Ka la’au kumu ‘ole o Kahilikolo” as per the CBS synopsis, “It’s Thanksgiving, and while Junior and Tani track down the thief who robbed his parents’ home, Five-0 investigates the murder of a beloved philanthropist and the theft of his ultra-valuable koa tree. Also, Danny moves in with McGarrett.”

Thanksgiving has come to the island. There was going to be a huge gathering at McGarrett’s. McGarrett was putting things together and he wasn’t going to let his own feelings get in the way. He lost his mother recently. He could have given himself over to grief and he was choosing not because he wanted this holiday to be good for all them, but then the unexpected came up. His friend and coworker had needed a place to stay. Danny has mold at his place. This has happened to him more than once and he continues to blame it on the tropical weather.

Anyways, Danny needed a place to stay. He sort of invited himself to McGarrett’s and now he wants Junior’s room. He said Junior could always sleep on the couch even though the couch is Eddie’s. McGarrett didn’t have space and still, Danny was pushing his way in. The men were going to argue about it when they got called in on a case. They later arrived on the scene of a homicide and the victim was George Parks. He was a huge humanitarian. He constantly gave parties at his house for some fundraiser or another and so that meant half the island knew about his valuables.

George was killed because he came home early just to walk in on a robbery. The thieves had stolen his Koa tree. The tree was known as “Hawaiian Gold” because it was so valuable and George’s tree was worth at least a million. George was even killed over the tree because the thieves didn’t want him getting into their way, so the team investigated anyone who might have known George was supposed to be out of the town and the best place to start was with his family. George had three children including the one he called the night he was murdered.

George called his son when he suspected someone had broken in. Preston told his father to call the police and wait for them, but George chose to handle things his own way. He went into the house and he grabbed his gun. He must have thought he could frighten off the burglars except that’s now how his story ended. He died after someone snuck up behind him and bludgeoned him to death. In other words, George died for nothing. He could have called the police when the moment arose and he would still be alive today.

The team was now investigating his death because of his foolish actions. Not that they mentioned what they thought to his children. George’s kids didn’t know anyone that would steal from their father. They said their dad was a good guy and that seems to be the general opinion of George. Everyone liked him. The team was having a tough time finding suspects when they lost two members. Junior and Tani had taken time away from the case to investigate whoever broke into Junior’s childhood home.

Junior’s father was a proud man. He hadn’t wanted to tell Junior what happened and so it was his mother that called him after his father had left. Mrs. Reigns had wanted Junior to know. She told him how the thieves took their secret stash and not many people knew about it. The only one that Junior could think about was his former best friend Owen. Owen had stayed with his family for a year when both boys were eight and Owen’s mother went to jail. The woman eventually got out and had demanded her son back. And so Owen, unfortunately, returned to a bad situation.

Owen and Junior still friends, though. Junior had even shown Owen his family’s hiding spot and so Owen was the only outside member that knew where it was. Owen, therefore, was Junior’s chief suspect. Junior knew Owen had become an addict like his mother and it’s why their friendship ended as it did. Junior had tried to get his friend’s help. He did everything possible and none of it worked because Owen didn’t see that he had a problem. He didn’t want to give up on the high. Owen was an addict unready to admit he was an addict and so Junior gave up on him.

Its a decision he still thinks about. Junior wonders if he had only hung in there, could he have saved Owen’s life and put him back on the right path. Its what Tani did with her own brother. It worked for her and so Junior blames himself for how Owen turned out. He questioned his decision to end the friendship because maybe then Owen wouldn’t have robbed Junior’s parents. Junior went looking for Owen at Owen’s mom’s place. She said she didn’t know where he was. She apparently last saw him after she had given him money for drugs and he wasted half of it.

Tani spotted a sample that was left. She then took a picture of it and sent it to her brother who identified where the drugs were from. Tani and Junior later found the supplier and they also found Owen. Owen was off getting high again. He thankfully hadn’t run when he saw Junior and he owned up to what he did. He apologized for robbing the Reigns. He tried to say that he only did it because he was hurting, but Junior didn’t care for his excuses. He told Owen that he has two options. He could either go to jail or go to rehab and so Owen chose rehab.

Junior even got his father’s things back. He got the cigar box with his father’s medals and inside there was a bunch of letters from Afghanistan. Only they weren’t from him. His other case, in the meantime, had taken a turn. The team found the thieves and they were all dead. They had been killed over what seemed like a piece of the tree. There was just that one piece that missing and it was the only one with an opening. It turns out a family member had been hiding a severed head in the tree. There was blood found on other parts of the koa and it matched a woman who had been dismembered.

The woman’s head had never been found at the time. It had been missing and it seems that one of George’s children had placed it in the tree. So, the team went over their records. They realized there was a missing gap in Preston’s testimony of about forty minutes and so they pushed him until he revealed the truth. He had covered up that timeframe because he said he had killed the woman with the missing head. Her name had been Lena Schmidt. She was a foreigner just cruising around and one day Preston had invited her back to his place.

They partied and she had an accident in the pool. Preston said he didn’t mean to kill her. He had pushed her into the pool as part of a joke and so he confessed to everything, but sadly he hadn’t killed Lena. That had been siblings. His siblings were worried about a potential lawsuit and all the drugs they had taken while they partied. They also didn’t want Lena’s accident to be connected to them and so they killed her when Preston wasn’t looking. And then they dismembered her.

Preston had no idea what his siblings did until the team revealed the cause of death. And when he heard what really happened, he flipped on his siblings and admitted that they killed the thieves together.

And so now all three are going to prison.

And Junior returning his father’s stuff as he did, had earned him a spot in his father’s good graces and so he invited them to McGarrett’s for Thanksgiving.

The team was later reunited at McGarrett’s and Junior was even flirting with Tani while he was at it.

Junior was feeling a lot lighter now that he knew his father was checking up on him when they had been estranged.