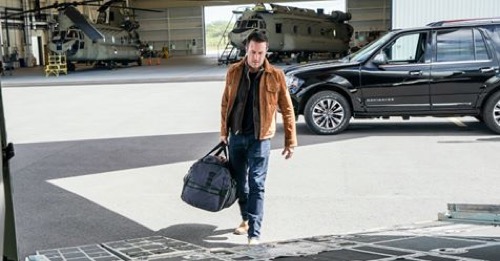 Tonight on CBS Hawaii Five-0 air with an all-new Friday, January 4, 2019, episode and we have your Hawaii Five-0 recap below.  On tonight’s Hawaii Five-0 season 9 episode 11 “Hala I Ke Ala O’i’ole Mai (Gone on The Road From Which There is no Returning)” as per the CBS synopsis, “Steve and Catherine are still reeling from the murder of one of their ohana and, along with Danny, Junior and some old friends, Harry Langford and Wade Gutches, hunt down the killer. Also, Tani and Grover investigate when a bag of human bones, discovered inside an abandoned storage locker, goes missing.”

McGarrett had taken some time off of work in order to get answers out of Gregers Thomsen. Gregers Thomsen was a Danish lawyer hired by Omar Hassan to kill McGarrett and his friends. His friends had all been killed off and now it was just McGarrett left. He wanted to get justice for them and to do that he needed answers. He was caught torturing the man by Danny. Danny had wanted to be there for McGarrett and so he went out to Joe’s farm to check on him, but everything changed once he saw what condition in Thomsen was in and he didn’t approve of Catherine being there if she wasn’t going to stop McGarrett.

McGarrett was blurring the lines between justice and revenge when another crime occurred. There was a situation with two brothers who bid on a deserted storage locker and found a bag full of remains inside. The brothers had tried doing the right thing and they called Noelani who was a friend of a friend, but by the time she showed up at the crime scene, someone had assassinated both brothers and took the remains. It seems the storage locker had belonged to the killer. He or she must have come back for their stuff and had killed the only two people that could describe the remains.

Noelani called Five-0 and she got half the team. Junior had joined McGarrett and Danny and the guys had rounded up a small group of elite forces to go after Omar Hassan. Hassan was unfortunately in Laos and was living on a secure compound. So until he was either killed or extracted, there was little chance the boys would return in time to assist with the latest case. It all came down to Lou, Tani, and Adam. The trio looked into the name that was on the storage locker and unfortunately it had been a bust. The killer had used an alias and so they didn’t have a name for their killer or their victim. And worse they didn’t have a photo.

There were no security cameras for the team to check. What did they have were fingerprints matching the same person and oddly enough they found love letters from high school. The trio figured the letters must have meant something to the killer and that he was possibly the guy mentioned. The letter was addressed to Woody and so he could have held onto those letters out of sentiment. Only the team also found a used lipstick in the boxes and they got a DNA match from that. It belonged to Carol Bukele and she couldn’t possibly be their killer because she died five years ago in a car accident, but she could have known the killer.

The team looked into Carol. She was from Canton, Ohio and so odds are the killer originated from there as well. Woody also held onto a bowling championship trophy and a distinctive bowling ball. The team searched public records in Canton and they found their “Woody”. His real name Alexander Woods and he disappeared a year ago. He disappeared around the same time his failing company was about to go belly up and so the team believed that Woody might have been their victim rather than their killer. There was no trace of him since his disappearance and in the meantime, his partner had had the company all to himself.

It was a bait and tackle shop. Woody’s partner closed the place no longer after Woody’s disappearance and was able to settle the debts as well as earn a tidy sum for his troubles. This partner went on to be caught with an unlicensed gun and had been in prison for the last twelve months. He was recently released a day ago and his prison time would explain why whoever owns the storage locker had failed to maintain payments but was soon at the scene when he found out someone had bought his stuff. The business partner didn’t even need to confess because the trio had had enough on him to arrest him. And so it turns out they hadn’t needed the others.

It was the others that actually needed them. Especially during a few hits and misses that could have ended the whole thing and it was a good thing the guys got lucky. The team in Laos had used Hassan’s own his business partner to find out where Hassan was hiding and McGarrett had gone in guns blazing. He wanted to catch Hassan alive because Hassan could hopefully lead them to Greer, but his hesitation in killing Hassan hadn’t been Hassan’s plan. Hassan would rather die than go to jail and so he begged McGarrett to kill him despite his own son being in the room. It would have started up the nasty cycle all over again and so McGarrett refused.

McGarrett wanted Greer and eventually, he got the answers he needed. He and Catherine later tracked down the fallen CIA agent and they had been forced to kill her but it hadn’t been McGarrett that took the shot. It had been Catherine. Catherine remembered when she and McGarrett first started dating that Greer had tried to warn her off. It seems the woman had been jealous of McGarrett moving on and had wanted to spite him. But Catherine had ignored Greer’s jealous and neither she nor McGarrett regretted their relationship.

It had been Joe that set them up and that’s something they’ll always be thankful for.