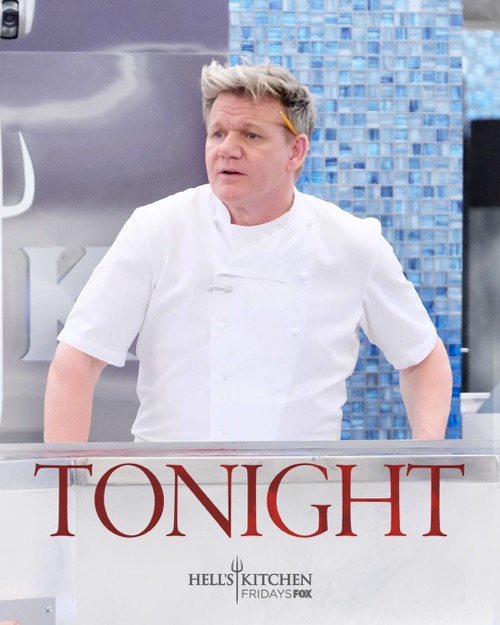 Tonight on FOX their Gordon Ramsay culinary competition series Hell’s Kitchen airs with an all-new Friday, January 4, 2019, season 18 episode 10 and we have your Hell’s Kitchen recap below. On tonight’s Hell’s Kitchen season 18 episode 10 episode called, “Poor Trev,” as per the FOX synopsis, “Both teams are down to four chefs each, as the competition continues to heat up. The dining room gets an Italian transformation for one of the most anticipated challenges of the season—the blind taste test.

Hell’s Kitchen then closes its doors to the public for a special charity dinner service, during which the two teams cook to honor supporters of St. Jude Children’s Research Hospital and the Waterkeeper Alliance, with a new Italian menu. Ramsay must step in and finish cooking for one team.”

Hell’s Kitchen begins with Jose is encouraged to prove himself and he will bounce back. The chefs talk about their kids as Brett says he loves his girl at home and feels he has changed so much. Chef Gordon Ramsay calls the chefs first thing in the morning into the dining room where he has transformed it into a cozy Italian cafe. They talk about classic dishes they would have, with main dishes and desserts; Marino arrives with a Gelati cart, wearing tiny white shorts as he serves them the simple chocolate and vanilla gelato.

Marino gives them blindfolds, revealing this is the blind taste test. Trev has had nightmares about this challenge. Each of them is to taste a variety of stunning gelatos infused with a single ingredient they need to identify; the team who correctly identifies the most wins the challenge. If they get more than 2 wrong, their teammate will get blasted with spaghetti; if they get 3 wrong, they get marinara sauce from the ceiling; but the 4th wrong will be Parmesan cheese.

It is Trev versus Heather with Jose and Kanae in the hot seats. First one up is a carrot and they are both wrong. Second, mango with Heather getting it. Jose gets blasted with spaghetti. The third is ginger and Jose gets marinara sauce dumped on him. Heather gets her second wrong and Kanae gets blasted. Tomato is next (2 – blue, 0 – red). Trev is embarrassed for getting 0-4.

Up next is Motto and Mia, while Heather and Trevor are in the hot seats. If Mia gets this right, she is the first to go four for four. Current score is 5-3 for the blue team. Mia gets the peanut butter and considered the challenge master.

Brett and Ariel are up next while Motto and Mia sit down. Brett gets two wrong and Motto gets nailed right in the face with spaghetti. It is 9-5 for the blue team. With Kanae and Jose up with Brett and Ariel up in the chairs, the blue team only needs one right and Kanae wins it all. She picks coffee and the blue team wins 10-6.

The blue team is in for a day of pampering at Southern California’s Premiere Korean Spa. The red team’s punishment is to clean up the mess in the dining room and tonight they will be honoring two charities with two 12-tops, he wants them to set up and polish all the silverware. They will be serving a special gelato for dessert that they will be making by hand. Trev feels this was the big one and if you don’t score in this challenge, you will go home. Heather reminds him not to let this break him as he tears up from embarrassment, complaining that his palette is shot and he’s extremely disappointed.

Marino gives the red team the supplies to clean the dining room. He jokes that it looks like a murder scene from a mafia movie. The women are enjoying the spa and feel like royalty when they win; all of them feel Trevor is going to snap although Jose and Trev are both close to snapping. Back in Hell’s Kitchen, Trev breaks one of the churns as the other guys break Trevor’s balls. Brett suggests he put some cold water on his face and lighten up as Trev says sometimes the clown even gets sick of laughing before he exits the kitchen.

Trev retreats to the dorm, complaining that today has probably been the most stressful so far. He knows he has to bounce back and needs to show Chef Ramsay he can do it. The women return and both teams prep for tonight’s special charity event. Ramsay lines them up, informing the red team is cooking for St. Jude’s Children Research Hospital and the blue team is cooking for Water Keeper Alliance; he tells both teams to make it a night to remember. There is a new menu for tonight, each chef is responsible for one course, tells them to get on their station and Marino opens the doors of Hell’s Kitchen.

Motto and Mia are responsible for the pan seared scallops over polenta. Branzino with fennel puree is made by Brett and Ariel. Truffle carbonara will be cooked by Kanae and Trev. Veal saltimbocca will be made by Jose and Heather. Each team will work on the tiramisu souffle dessert, with the red team’s hand churned gelato on top.

Chef Ramsay calls for the scallops for each 12 top and Mia promises she will deliver. She isn’t very loud but has delegated everything. Trev is already messing up by cooking scallops only on one side. Mia is told to check her plates and make sure she is happy with them. Marino and staff present the blue teams dish apologizing for the red team. Chef Ramsay starts to yell at Motto that he needs to get going. Finally, their dishes are sent out and everyone is a happy camper.

Ramsay calls the red team over, demanding to know how they screwed up that many scallops. He isn’t impressed and shocked, saying they need to divide and conquer; they need to be explicit and get it done. Brett tries to get the red team on track while under Ariel’s supervision, they are ready and once again the blue team’s food is out; thankfully the red team isn’t far behind. Chef checks and sees that everyone is pleased with their food.

Trevor demands that his team makes the dish tight as Kanae needs to keep the momentum going and can’t fall behind. Trev wants “sex on a plate” as the guests can hear him talking about how it needs to be sexy. Ariel pushes Kanae, who demands better plating and different portions. Heather feels she has this and needs Kanae to step back. The guests can hear that Ramsay is getting mad as Kanae feels Heather screwed her. Trev is able to get the red team’s dish out, while the blue team might be screwed. Trev is told this was the best dish so far. Gordon apologizes to Marino as the blue team catches up.

Jose looks like a deer in the headlights when he tries to vary the time for the veal saltimbocca. He finally agrees on 8 minutes as him and Heather attempt to lead the teams. Heather gets her dishes out first, but so does the blue. The red team is called over and two of their dishes return completely raw. Chef Ramsay calls them all to the back, where they all listen as Marino brings back a total of 6 dishes to the red team.

The blue team is enjoying their meal, while half of the red team sent back. Jose feels like his team let him down. Chef shouts for Trev and Brett to get on the souffle while the rest of the team works with Chef Ramsay to make the Saltimbocca. The motto says they are lucky chef didn’t stab them.

The blue team brings out their dishes while the red team races to catch up. All the guests enjoy their dinner but once they leave, Chef Ramsay tells them he is very disappointed in them and it’s obvious the red team is the losing team. They are told to piss off and pick two team members up for elimination.

Trev doesn’t want to hear it and feels that Chef Ramsay will put the rest of them up as he will not be going home. Jose calls Trev a little bitch and should have been gone a long time ago because he sucks at everything, except talking. He thinks Trev never owns up to anything but keeps his nose up Chef Ramsay’s ass all day.

The red team returns to the dining room, as Chef Ramsay tells them they royally f**kd that one up. Trev says the first nomination was Jose, as he was in charge of the veal and he didn’t run the station. The second nomination is Trev who claims two people were in charge of the station but he is getting the blame and apparently he kisses Ramsay’s ass all the time and there is no communication. Brett clarifies their team would be stronger without him.

Jose says he is different than Trev who screwed up scallops and veal. He wants Trev to own his mistakes. Jose feels he has a lot of drive and passion and continues to grow. Trev says he has more fight in him than anyone and always bounces back hard. He says Ramsay is looking for a leader and he saw one today. He tells Trev to get back in line, telling Jose there was a lack of leadership showing he is not ready to be his head chef in Las Vegas; they shake hands and Jose heads off. He expects them all to get out of their comfort zone and prevent this from happening. He tells them all to piss off!

“On a night when it should have been Hell’s Kitchen giving back to some amazing charities, it was charities that ended up giving Jose’s raw veal!”
~ Chef Gordon Ramsay