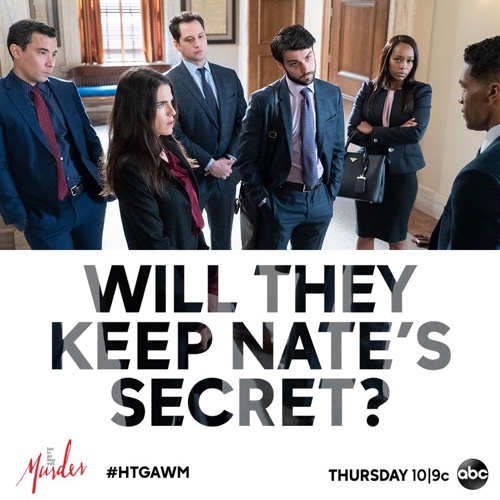 Gabriel called Annalise for help. He was arrested for Miller’s murder and he needed a lawyer to help fight the charges because he knew he was innocent, but go one wanted Annalise to go see him. Gabriel has been lying to them from the beginning and he could still be lying. The others questioned if Gabriel could be working with the feds and that the feds wanted Annalise. Annalise and her band of killers have committed countless crimes over the years. Meaning the idea the FBI might be coming after Annalise and are merely using Gabriel to do it might not be that farfetched. Gabriel has given the group no reason to trust him and so Annalise insistence to go was more about her as well as what she wanted to do for Sam’s son.

It didn’t mean that Annalise was stupid. She went to see Gabriel and the first question she asked was if this was a trap? She also grilled him over whether or not they asked Gabriel about Sam or her. Gabriel said no, but Annalise also asked why they believe he killed Miller and that’s when he tried to lie. The first he didn’t know why they thought he killed Miller and Annalise had threatened to leave. Gabriel realized the only way he got to keep his lawyer was, to tell the truth, and so he admitted that he had been in contact with Miller. Miller reached out to him about his father and he Gabriel about Annalise as well. It seems Miller had been conducting an off the books investigation into Annalise and he wanted Gabriel to see what he could learn.

This had come as a shock to Annalise because she didn’t think that Miller had been looking into her or that he had been using Bonnie. Bonnie had tried to deny it when she was told and she said that Gabriel could be lying again, but Gabriel agreed to hand over his cell phone to Annalise and all he wanted was to be represented. Annalise said that would be easy if Gabriel wasn’t withholding any secrets and again he chose to lie. He told her that there was nothing the feds could use against him and so it came out in court that he was being tried for violating the Patriot Act. Which means he took part in domestic terrorism. As Gabriel’s lawyer, it had been up to Annalise to ask for proof of these allegations and that’s when she was shown the picture.

It was a picture of Gabriel from the protest in Ferguson back in 2014. Gabriel had his face covered but with technology it was easy to prove that Gabriel had been the one throwing a chemical weapon at a bunch of cops. It had actually been a teargas can and Gabriel later explained that he was throwing it back at the same police that was trying to use it on him. He didn’t think that had been a crime so horribly it was deemed terroristic and so that came out of nowhere. Annalise said she could take of it and in the meantime, Laurel found something on Gabriel’s phone. He’s been talking to his mother about a woman and everyone just assumed it was about Annalise. They thought Gabriel was up to something with his mother and so they confronted him.

Only Gabriel had an explanation for that too. He said that he was talking to his mother about Michaela and he called her in front of Annalise to prove it. Gabriel might be a little too attached to his mother, but he hadn’t been talking to Annalise and so Annalise went back to her team in order to push them into doing actual work. They tried to track down any photos at the wedding of Miller with Nate and Michaela had been tasked with dealing with Tegan. Tegan was still angry at them and Michaela was doing a great job of fixing that, but then Tegan learned that Annalise was representing a terrorist and so she clammed right back up. And Tegan was still meeting with the FBI only this time they were asking about Annalise.

Tegan was promised that they would protect her like before, but Michaela understood something was happening and so she came up with a plan with Oliver. They created an email that couldn’t be traced back to them and it all said was “Hi Jane Doe”. It would be enough to scare Tegan and stop her from working with the feds again. All Michaela and Oliver needed were Annalise’s say so and once they had they sent the email. It did as it was intended and Tegan was frightened. She didn’t want to go looking into Annalise and she also prevented anyone at the firm doing so as well. And afterward, that’s when the group focused on Gabriel’s case and they had the perfect method of getting him off.

They had to use Frank’s security footage of Gabriel’s apartment do it, but it ultimately proved that the feds planted evidence at Gabriel’s apartment to tie him into what happened with Fergusson and so the United States government dropped the charges against Gabriel. It hadn’t meant much to the man in question because he had been furious about the camera and so Annalise realized she would have to win him over. Gabriel has no reason to be loyal and he was already approached by the FBI that did ask him about his father and how Sam died. So Annalise gave him a bit of truth. She told him she’s since learned that Miller found out she had been trying to adopt Wes Gibbons when he was a kid and that she couldn’t go ahead with it because Sam refused to raise someone else’s kid.

Annalise also mentioned how Miller talked about this information with the governor and that Governor Birkhead killed Nate’s dad. She might also have something to do with what happened to Miller as far Annalise claimed to know and so she gave Gabriel the information he needed to get immunity. He later met with the feds and he fed them a story in exchange for never having to face charges for any of his previous crimes. He told them about Wes’s adoption and how Miller was talking with Birkhead right before his death. There was so much doubt and suspicion laid at Birkhead’s door that after the feds miraculously recovered Miller’s body – they went to go talk to the governor about her connection to the ADA.

Everyone thought they were in the clear until someone posted a photo of the wedding on Instagram that showed Nate with Miller in the background.