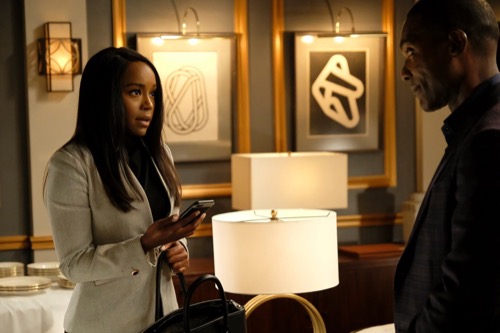 Tonight on ABC their hit drama How To Get Away With Murder (HTGAWM)  airs with an all-new Thursday, October 24, 2019, episode and we have you How To Get Away With Murder recap below!  On tonight’s HTGAWM season 6 episode 5, “We’re All Gonna Die” as per the ABC synopsis “During therapy, a young Annalise is forced to acknowledge a very emotional and pivotal reality that makes her admit a hard truth. Meanwhile, brutally beaten Frank returns home with a secret to share about Laurel’s disappearance.

Elsewhere in an attempt to get to know her father, Michaela accepts an offer to work alongside him but quickly learns that it’s not all that it’s cracked up to be.”

Annalise listens to audio of her and Sam having an affair. She cries. The phone rings. She heads to the hospital where Frank is bloody and injured.

Present – Michaela is at a bar with her biological father. He tries to make her understand why he waited all this time. He needs to leave but asks her to see him tomorrow. She agrees.

At the hospital, Nate finally tells Annalise that the FBI offered him a deal. They are interrupted by the police. Annalise tells them it was Xavier and that they should be out looking for him. Frank starts to get worse. Before he is wheeled off he says Laurel’s name making Bonnie think she was there when he was attacked.

Previous – Xavier wants to know where Laurel is. He has Frank tied to a chair.

Present – Frank is brought to the surgery. Annalise tells Nate she knows he isn’t an informant.

Tegan is in her office when Cora comes to visit. Meanwhile, Michaela arrives to see her father. She has a lot more questions. He has a proposal – he wants her to be his business partner. This makes her take a pause. They talk further. Annalise texts.

Asher kicks his sister out of his partner after letting her spend the night. Chloe tells him their mother is suicidal. She needs them. He doesn’t care, showing her the door.

Annalise meets with Oliver, Asher and the others. She tells them about Frank. Oliver admits that Frank found Laurel days prior.

Previously – Frank is still tied to a chair and being questioned by Xavier who tells him he knows all about Annalise covering up Sam’s death. Frank won’t talk so they continue to torture him.

Present – The doctor tells Annalise that Frank was burned, beaten and electrocuted. Meanwhile, Michaela wants answers about why her dad didn’t check on her mother after she was born. He can’t change all that but he wants for them to get along. What can he do to earn her trust? She tells him she wants money. He gives her a blank check.

Tegan and Cora continue to talk. They fight about Patrick. Cora admits she had feelings for him before. Tegan promises she will take her for everything she is worth. Cora leaves.

Michaela heads to see Asher, Oliver and the others. She tells them about her father. Tegan shows up at Annalise’s. She is sloppy drunk and had a bad day. Tegan admits she is still in love with Cora. And she can’t stand it. Annalise comforts her. Tegan tells her she is glad to know her.

The next morning, Annalise arrives at the hospital. She tells Bonnie Gabriel has tapes of her session with Sam. Annalise blames all of this mess on herself. Bonnie thinks it started with Sam.

Annalise faces Gabriel and explains what happened with Sam. Meanwhile, Tegan tells Cora she misses her and she wants to let go. Cora tells her she doesn’t feel the same and hasn’t for a long time. They are over.

Annalise continues to tell Gabriel about how Sam pushed her to see what she really wanted. Chloe tells Asher his new family is bad news and bad people. She knows he isn’t happy and just trying to fit in. He needs to come home and give her and their mom another chance.

Annalise tells Gabriel that she tried to give Sam a child. He wanted more and more.

Conner is angry. He tells Oliver he feels like he isn’t trusted.

Frank wakes and is instantly ready to vomit. He shakes. Bonnie calls Annalise crying, telling her to come right away. When Annalise arrives Bonnie tells her she knows why Frank was saying Laurel to them – because Annalise helped her disappear. Annalise denies it to Bonnie. This is all a ploy by Xavier to take them down.

Tegan says goodbye to Cora who tries to hug her. Tegan tells her not to. She leaves. Tegan drops to the floor crying. Outside, Nate offers to help Cora who can’t get her bike started.

Bonnie gives Frank sips of water. She has always been there for him. He tells her he loves her.

Annalise calls to check an account she used for Xavier, The funds are gone. She calls Michaela’s dad and tells him it is time to pay up. Asher heads home to see this mom. Michaela tells Gabriel she wants to stop fighting.