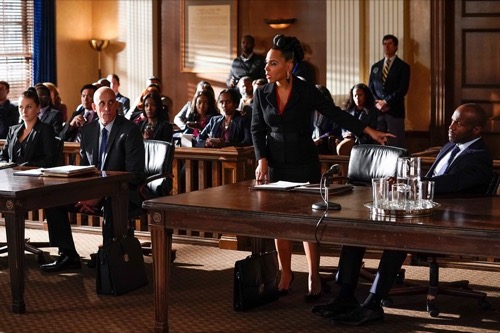 Tonight on ABC their hit drama How To Get Away With Murder (HTGAWM)  airs with an all-new Thursday, November 14, 2019, episode and we have you How To Get Away With Murder recap below!  On tonight’s HTGAWM season 6 episode 8, “I Want to Be Free” as per the ABC synopsis “After taking the stand during Nate Senior’s murder trial, Bonnie’s world is turned upside down when a mysterious accident leads her to a hard realization.

Meanwhile, the students compete for a large cash bonus during the final exam where they must come up with the best defense for a conspiracy-to-murder charge.”

Their Final Criminal Law Exam came with a price tag. The person that came up with the best defense for their client would win the check for 64K and so everyone wanted to win, but the system in their case was unfair. It was just as unfair as the real system. Annalise set it up so that the person that went last would best know the case and her students complained about it. She told them that’s not her problem. Her students still had to come up with the best defense when they were questioned. They couldn’t think about anyone else.

Each student had to think about themselves first. Annalise’s favorites were surely thinking about themselves. It’s what they usually do and so their mock trial wasn’t any different. The case they were given was Snow White. Ms. White was accused of Conspiracy to Commit Murder. It was believed that she coerced the seven dwarves into killing her stepmother and her current defense is that the dwarves acted alone. Annalise’s class now had to come up with the best defense for Ms. White. They also had to do so without thinking about the other case that was ongoing.

Nate had pursued his Wrongful Death suit against the Governor. He wanted answers about his father’s death. He also had Bonnie representing him and so Annalise used that to derail the suit. She let the Attorney General in on Bonnie’s relationship with Ron and Ron’s mother. Ron’s mother also testified that Bonnie knowingly in the weeks after she supposedly knew Ron played a part in a murder. The mother made a compelling case and the judge ruled that Bonnie was compromised. She couldn’t represent Nate anymore.

It was considered too personal for Bonnie. She was thrown off the case and so Tegan stepped up. Tegan’s wife was on assignment in the Middle East. She was now being watched 24/7 and that meant Tegan was free to represent Nate. She tried the case with Bonnie acting as her backup. They wanted to go after the Governor and it wasn’t working because the Governor was willing to sell out everyone under her. So, Annalise offered her own advice. She felt bad about tanking the case because she spoke to Robert and he made her see that the Governor needed to be tarnished.

Annalise had to make Governor look bad if she couldn’t remove her from office. The way to do it wasn’t by going after the Governor herself. It was by going after Ronald Miller and so they had to put Bonnie on the stand. The jury hadn’t been there when Ron’s mother took her down. They didn’t know Bonnie was removed from the case for being too familiar with Ron and that earlier stance now meant she had a personal insight into Ron’s mindset. Annalise wanted Bonnie to reveal how she found out Ron was dirty and Bonnie had to reveal Gladden’s involvement.

Gladden was the one that told her Ron ordered the hit on Nate’s father. Bonnie went on the stand and she told them that she had a confidential source that revealed pivotal information about Ron. She also mentioned how she was fired before she could offer this source immunity. Bonnie then said if the Attorney General cared about the truth that he would offer her source the immunity now or else he was covering for the Governor. Bonnie made the Attorney General look shady with her testimony and so now he has to respond or the jury was going to believe he was hiding something.

This was a win! Gladden was bound to get immunity and she was going to tell the truth that Frank wanted her to tell. Gladden’s life was threatened. Frank told her that she had to say Ron was behind the hit and he was going to remind her of that when Annalise called him. Annalise was on the phone with Bonnie when Bonnie’s brakes failed to work. Bonnie couldn’t slow down and she got into a car accident all while on the phone Annalise. Annalise then told Frank and they both went to the hospital to check on Bonnie.

Bonnie thankfully walked away with a brain bruise. She had to stay in the hospital overnight and Frank wasn’t happy about it. He wanted blood for what happened to Bonnie. He wanted to make the case stop and he was pushing his limit, so Annalise came up with a different plan. She suggested they tell the truth. She had Frank go back to Gladden and he demanded Gladden tell the truth on the stand. She had to say it was Xavier Castillo that ordered the hit. She also admitted that Ron tried to move up the transfer in order to protect Nate Sr. and that the plan failed anyway because Xavier Castillo got whatever he wanted.

Gladden wasn’t coerced into murder. She fully confessed to the part she played in an innocent man’s murder and she said she was willing to accept whatever punishment that came her way. Gladden’s testimony saved the case. The Attorney General was willing to settle the case, but Nate wanted to pursue the case. He still wanted the Governor’s head on the platter even after all of this. The Governor, on the other hand, was now claiming full vindication. She had nothing to do with Castillo and she went on television to claim so as well.

Nate now had no way of getting at her and this case also hurt Bonnie. Bonnie figured out what Frank and Annalise did. She didn’t want to speak to either of them now. She threw Frank out of her hospital room and she seems to be done with their toxic relationship.

Annalise in the meantime had given the check to Asher when he was the first to realize the Evil Stepmother could have faked her death because nobody was ever found at the scene. So, the mock trial was working while the group’s real lives were falling apart.