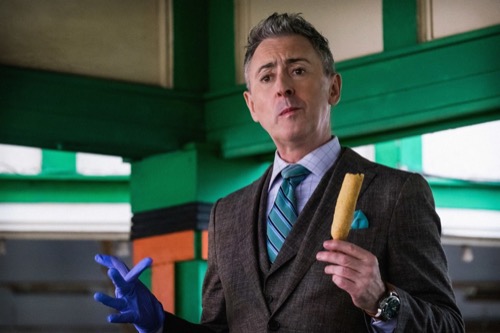 The body found in the park was flagged because it matches a similar crime in Garfield, Nebraska. The police department there sent over Detective Ryan Stock to help out with the joint task force and so now everyone available was working the Sleeping Beauty case, but the Lt. Jasmine Gooden hadn’t assigned her best team to the task force. Jasmine chose to assign Dylan and Lizzie a different case. They were working a murder on the roller-coaster and the victim’s name was Elliott Emmerson. The victim had been a musician and he used to be in a band with his twin sister Annie. Annie and Elliott were really close. Annie didn’t even need to be told that her brother was dead because she said she felt it and that’s why she knew it was him on that roller-coaster.

Annie had wanted to go see him because she felt that was the only way to say goodbye, but the police had to stop her. They didn’t want her compromising the crime scene and so they chose to question Annie a few feet away. Annie got to tell them about her brother and how he was a musical genius. He would write all their songs and he must have come to the theme park for some alone time. Elliott reportedly did his best work when he could shut out the world. Annie had nothing bad to say about her brother and she was getting more distraught as she went on. Her boyfriend Jason had been with her and asked the police if they would question Annie another time. No one wanted to be unfeeling and so they allowed Jason to escort Annie away from the scene.

Only Jason’s behavior had seemed a little overprotective. Dylan and Lizzie both thought that Annie was doing fine until Jason intervened and so they kept that in the back of their minds as they investigated Elliott. Someone hated him enough to kill him and that person must have known the victim. Dylan and Lizzie went to Elliott’s apartment and they saw his amazing music collection. He had a little bit of everyone and it was all on vinyl. Elliott was a great music lover and the guys believed they found someone who hated him when they saw someone smashed all of Elliott’s records. Dylan and Lizzie thought someone did that to Elliott and they were, in turn, asked if it wasn’t possible that Elliott did it himself.

Elliott went on a self-destructive streak. He broke up the band right as they were gaining traction and, while he claimed to want to try his hand at going solo, he got rid of all of his solo songs. It was like he didn’t know what he wanted. Lizzie and Dylan theorized what could have been the cause and Lizzie thought it was drugs. Dylan, on the other hand, thought it something else. He listened to Elliott’s music and every bit of it had a hauntingly meaningful. Dylan felt that nothing Elliott did would have come out of the blue though that didn’t explain the stolen car in Elliott’s possession. Elliott had stolen the car himself because they saw footage of the theft and another thing that doesn’t make sense is why Elliott tried to unload the car right after stealing it.

Elliott was practically giving it away to the sketchy super at his building. He also let the other man know that he was thinking about robbing a bank and he was so calm about it that the super suspected he was on drugs. It again brought up drugs. Lizzie thought that explained the sudden change in behavior and why he didn’t seem like he could control himself. Then Dylan took another look at that footage. He saw Elliott calmly steal a car, leave money behind, and appeared almost bored by it all. He also listened to Elliott’s music again and the last few songs that he wrote just for himself sounded like Elliott was depressed. It could explain the sudden change in behavior and it could even mean he went to the roller-coast to die.

Elliott could have gone to the amusement park to commit suicide. Its what Dylan and Lizzie believed until Dylan talked to Elliott’s sister Annie. Annie said her brother wasn’t suicidal. He was afraid of roller-coasters and has been since their mother tried to talk him into riding one. It had frightened Elliott and it was one of the last memories they had of their mother because she died from a seizure. Dylan heard all of this, but it was when he was with Lizzie that he finally put the pieces together. He realized that Elliott suffered from a condition called persistent déjà vu. It was a form of epilepsy and it could make someone feel like nothing they do has been new. It could explain why Elliott felt his music with his sister has gone stale and why he was always searching for something new.

Elliott inherited the disease from his mother and he probably never realized what it was because it progressed differently. He went to that roller-coaster because he was chasing thrills, but he wouldn’t have wanted to kill himself and so Dylan and Lizzie took another look at suspects. It wasn’t the sister because she wouldn’t kill her other half and it wasn’t her boyfriend because Elliott wasn’t a threat to their relationship. The only one that had motive was Elliott’s business manager and friend Ross. Ross had agreed to sell Elliott’s music to a record company and he had needed Elliott’s signature to make the deal. Elliott wasn’t in the condition to sell anything and so Ross tried to threaten him with a gun.

It was when Elliott didn’t budge that his friend shot him, but Ross was feeling so guilty about what happened that he confessed to Dylan what he did and so they did catch the killer in their case.

They also helped Ryan from Nebraska to connect the Sleeping Beauty’s case by showing that the recent victim had ties with Garfield, Nebraska.