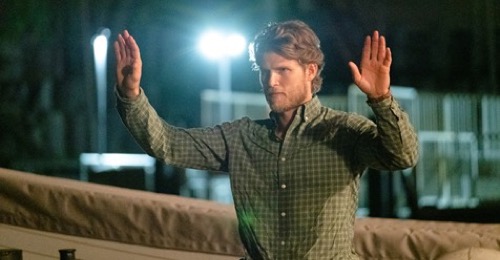 Detective Ryan Stock’s investigation took a turn. Both Ryan and Dylan went back to Nebraska because they had suspected their killer knew Ryan personally and so walking around Ryan’s hometown was supposed to help them figure things out. They thought they would suspect some kind of loner who was unstable, but their investigation made them realize that the only person that wasn’t affected by the recent murder spree was Cormac Rego. He was also the son of the first victim. His father is the victim of a serial killer should have spooked him and somehow it didn’t. It was like he didn’t mind.

Cormac knew Ryan as well. They grew up together and Ryan has great memories of him. Its why he didn’t want to see Cormac as it what he was. He thought Cormac was some great guy and that maybe he was a little reserved. Ryan didn’t suspect a thing until he went through the old family photos. There was one photo of them together as kids and they were under a teepee created from their cowboy’s bedsheets. It was the same sheets that the killer was now using with his victims. Cormac must have gone back to them as a way to mock Ryan. Ryan was there working with these big-time New York detectives and he still didn’t figure out he was hunting Cormac until after Cormac tipped him off.

Cormac might have been laughing to himself about it. It also explained why he increased his clues. He wanted to show Ryan up and he did that with each murder. He also called in on that podcast. Cormac tipped his hand the whole way through and it had taken a trip home to tip the scales. Ryan and Dylan called Cormac’s family to ask where he was, but they thought he went back to Mexico City. Cormac allegedly moved down there some years ago and so that provided him the perfect cover. He couldn’t kill his father because he was down in Mexico. He couldn’t kill those people in New York because he was in Mexico.

Dylan knew at that moment that Cormac must have gone back to NYC. He and Ryan head back to the city and they reported what they found. The whole precinct knew by that day’s end that Cormac Reggo was their killer. It was finding him that stumped them and they were only able to do so by narrowing the field. First, they took in where the murders were taking place. They knew that the killer would be located at the center of it and so that’s when they checked in recently purchased apartments and they found just the one on the first floor. The detectives later found the whole apartment empty. It was like someone rented as a cover and so everyone searched the place until they found the hidden room.

The one that used to be a cupboard. Cormac had piled up the sheets there and its where he hid the murder weapon. He clearly didn’t want to stop his killing spree, but it seems like he was forced to stop once he found out the cops were onto him. Cormac received a call from his mother that the police were looking for him. Its why he ditched the apartment and it could also explain why he tried to kill his cab driver because the guy knew too much about his location. His latest victim had luckily survived the attack. He was at the hospital and will be recovering for a while. Cormac, on the other hand, was still out there.

The police were looking for a way to get his attention and they found it when they saw his book for his childhood. It seems to have belonged to his sister. Candace and Ryan dated back in the day and so she trusted him. She trusted him enough to come to NYC. The police wanted to ask Candace about Ryan because she was the one person he was connected to and so she told them Cormac’s history. How their father was especially tough on Cormac. He once ripped Cormac’s sheets off his bed because he said there were too childish and he made Cormac sleep outside because he wasn’t allowed back into the house until he had “proven” he was a man. And so he sister went out there with the book because she didn’t want Cormac to be alone.

All Cormac seemed to have was his sister Candace. Their father hid his abusive personality behind the perfect family façade and the siblings’ mother never stood up for them. So Candace was the best way to get to Cormac. The police used her to call Cormac and she got him to agree to a meeting. He set the time and place, which Dylan didn’t like. He thought that Cormac was taking back control and that they might lose him in the following chaos. Both Ryan and the lieutenant disagreed with him. They wanted Cormac anyway they could get him and so they went through with the meeting. The same meeting that Cormac didn’t exactly attend.

Cormac chose to watch his sister from the rooftop. He probably just wanted to see her to ease his mind and so he was never going to let himself be caught. Cormac made a run for it the moment he saw that the police had spotted him. He ran around an empty building and was even nicked by Ryan, but he also got away. A wounded Cormac was worse than an ok Cormac so the police had a problem on their hands. They knew that Cormac wouldn’t fall for the same trick twice and they had no way of contacting him again. At least not until they remembered the podcast. They had Candace go on Dennis Walker’s podcast and ask her brother to turn himself in. Her brother, however, chose something else.

He arranged a private interview with Dennis Walker. Walker went to him and he ended up as a hostage. Cormac even made a video of his hostage to lure Ryan into a trap, but Dylan figured it out and they found Cormac at the docks. He was there because the family’s boat was the one place he felt safe. He also went there because he knew Ryan would chase him and he wanted to kill Ryan. Ryan was the Golden Boy of Garfield. He was the perfect son that Cormac could never be and what his father punished him for. So Cormac had his gun trained on Ryan when Dylan got his attention. He told Cormac to “man up” and it angered the killer so much that he turned his gun on Dylan, and that allowed Ryan to take him down.

Ryan was able to arrest his killer and put the whole thing to bed, but Dylan went home, and he ran into his father.

His father wanted to warn him that the CIA suspected Julian was behind the malware on the NYPD’s servers.