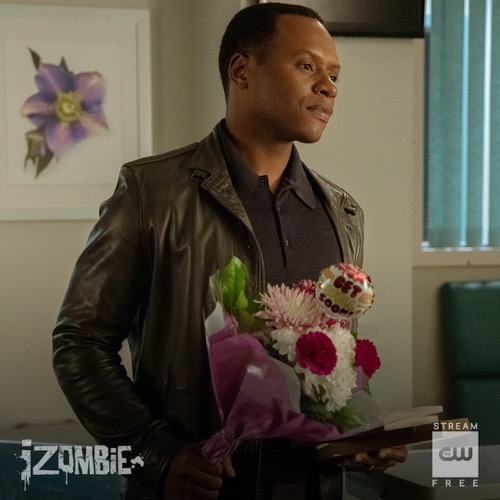 Tonight on the CW iZombie airs with an all-new Thursday, June 13, 2019, season 5 episode 7 called “Filleted to Rest” and we have your weekly iZombie recap below. On tonight’s season 5 episode 7 as per the CW, “While investigating the murder of Eleanor Barba, a chef at a high-end restaurant, Liv consumes her brain and becomes an unrelenting perfectionist who knows just how to break a person to their very core. Meanwhile, Major is on a mission to find out who is betraying the commander.”

A chef with a temper was murdered at her restaurant. Someone knocked her over the head with bread and then wrapped her head in plastic wrap. Chef (as she made sure everyone called her) suffocated before long and that was a terrible way to die, but frankly, there was a whole slew of people that hated her enough to do it. The victim was a known perfectionist. Chef fired anyone that failed to live to her impossible standards and so Liv’s friends cherished the few moments they had left with her because once Liv ate those brains she became a different person. Liv began demands around the morgue and Ravi didn’t have time for it. He was out looking for a guy known as Beanpole Bob.

This Bob fellow was a Utopian dealer. He also might be Ravi’s last chance at creating a cure that would hurt no one. The secret about the kids with a rare disorder being the cure for zombism was out there and Ravi knew it was just a matter of time before those children were hunted. He wanted to prevent that by giving zombies another alternative. He thought the CDC would be willing to help and it turns out they were upset with him. Ravi was supposed to tell them everything and not just what he wanted them to know. Also, the lead doctor at the CDC thought Ravi was being dramatic when he said those kids would be hunted and so they now wanted to end their partnership with him.

Ravi could only depend on Charlie and even Charlie wanted a favor. She wanted Ravi to contact her twin sister for her. The sister was sort of difficult. Lila thought Charlie had blamed her for something with their mom and that wasn’t the case. Their mom has dementia and she couldn’t remember much. She could barely remember she had two kids yet Lila was expecting rationality. Charlie thought if she could talk to Lila then maybe that would get to Lila to forgive her and that’s not what happened. Lila went to the morgue to see a dead body and she gave that corpse more time than her own sister. Charlie barely got a word in when Lila left again and there was nothing Ravi could do.

Ravi still wanted to try, but Lila was difficult and his friends needed him as well. Clive was filling in for his wife as she was on maternity leave and so he was an acting lieutenant. It was Clive’s job to hand out assignments to the detectives and that meant talking to Michelle. Michelle was the one picked to fill in for him. She was also pregnant and Clive didn’t know if it was his baby or not. He wanted to play it safe by giving her an easy assignment and somehow she was still injured. She was sent to a skating rink and a stray puck hit her in the head. Michelle was taken to the hospital and Clive was called because he was listed as the father of the baby. So Clive showed up thinking he was the daddy and Michelle told him that he wasn’t actually the father.

Michelle just put his name down because she didn’t want to contact the real father. The other guy was unreliable and he wouldn’t have showed. Michelle knew that someone like Clive would and so she apologized for letting him think differently. Luckily, Clive understood where she was coming from and he was willing to put it past them. He also had to return to the case because Liv was still on Chef’s brains. Liv’s behavior has been all over the place since she made herself lunch and she even ran into her mother. Her mom hasn’t forgiven her for not donating to help save her brother Evan’s life and the woman didn’t seem like she was ever going to forgive her. And maybe that’s why Liv confronted her.

Liv told her mom that she and Evan figured out who their father was. She figured that’s who her mom called to donate to Evan, but it turns out she and her brother didn’t have the same father. Liv’s father was a junkie. His name was Martine Roberts and he used to be a brilliant doctor without borders. Then he fell back into his drug habit and the last his ex saw of him he was begging for change on the street corner. Liv’s mom told her this to hurt her and then she just walked away. Liv wanted to get out of the hospital as fast as possible and she couldn’t because Clive found their suspect at the hospital. It was the brain thief. Someone had stolen brains out of the freezer at the restaurant and they found out it was a guy named Darren.

Only Darren had an alibi for the time of the murder. He was out robbing someplace else and he still has the merch at his place. Its why he ran when he saw the cops and had gotten injured. Darren was in the hospital for his injuries and he couldn’t exactly leave. He was handcuffed and that gave Clive to check out his alibi. He and Liv also followed the lead Darren gave them. Darren said he saw Chef taking all her anger out at the dishwasher because the young man dared to eat brains scraps. The guy wasn’t registered and so he was a closeted zombie. It turns out Chef threatened to out this young man to his parents and he panicked. He killed her because he didn’t want his parents finding out he was a zombie.

It was a sad end to the case, but it meant Liv could get off the brains and Ravi could facilitate a sister reunion. Lila was told about everything that’s been happening and she came to forgive her sister. The two were now talking and it didn’t seem like a one-off.

Meanwhile Major was dealing with another betrayal because his friend Justin chose to side with the militants and Major was forced to put him down to prove he wasn’t weak.

And Liv found her father, he beat his addiction and was now a zombie secretly working with the militant movement.