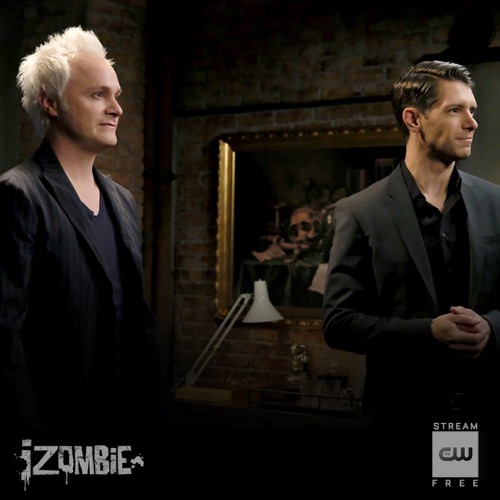 Tonight on the CW iZombie airs with an all-new Thursday, June 20, 2019, season 5 episode 8 called “Death of a Salesman” and we have your weekly iZombie recap below. On tonight’s season 5 episode 8 as per the CW, “Liv and Ravi each consume the brain of a very dislikable car salesman and inherit his competitive nature.”

Liv tracked down her father. She had heard that Martin Roberts was once a brilliant doctor and that he had been forced to give it up after he became a drug addict, but there were a few details she hadn’t known when she went to meet him. Roberts was also the man that created the Utopium drug. He used his medical knowledge for evil and got high at the same. He was still working with a nefarious crowd as until recently and he was also a zombie. There was plenty to Roberts besides what Liv’s mother knew and so telling her daughter about him wasn’t her greatest idea. It made Liv use her contacts in law enforcement to look it up and she introduced herself to him as a daughter looking for a father.

Luckily, for both of them, Liv was called into work before she could truly talk to her dad. She was called about an accident that turned out to be murder and she wasn’t the only one partaking in the brains this time. Ravi hadn’t known it was murder when he took a snack and so he was on the brains as well. Liv soon joined him on the brain high and so now they were both on car salesman brains. They were uber competitive and a little smarmy. The brains they were on belonged to Rick Randall. Randall was driving home one night when his car was hacked and someone drove his car into the lake. He was on the phone when he died and so that’s how the police knew there was something wrong.

Clive turned to Liv for help in closing the case like he always does, but he got both Liv and Ravi what with the brains they were on and so their highly competitive nature came in handy. They found out that Randall and his wife raised their life insurance policy after he was promoted and they sold out their tickets for the police raffle. Everyone hates those raffles anyways and so the more the merrier. Clive also learned from Steve that yes the car was hacked and it was either a very good hacker or someone who knew the factory settings. Like the people, Randall used to work with. He got his car from his own dealership and he was probably bragging for a while. He could have told everyone what the make and model of his car was.

Liv later got in touch with her father again and the two met for lunch. It was just supposed to be hot dogs and conversation, but Liv saw for herself that her father was still using. She noticed his shaky hands as well as his other symptoms. Liv had asked Martin about his past and he claimed he was clean now. That was clearly a lie and the fact he was lying so soon into their relationship worried Liv. She didn’t want anything to do with him and she didn’t turn back when he said that he now has a reason to get clean. If that were true, he would have gotten clean when she was a baby and he would have fought to have been a part of her life. Martin did none of that and so Liv knew better than to ever trust him again.

Liv went back to work. She tried to help Clive close the case and so they talked to some of Randall’s coworkers. There were all a pretty ruthless bunch, but they were talkative and so that’s how they learned about Stu. Stu used to be married to Gina and then she left him for Randall. Randall was someone that liked to win at any cost and so he ticked off plenty of people. He angered Stu and Stu wasn’t the type to make a fuss. He also angered Jack and Jack didn’t care because he was fine with retirement. Only Jack had some good gossip. He said that Gina was also two-timing Stu and Randall with the general manager Ted. The work environment was poisonous to say the least and Gina seems to be the man point of strife.

Clive and Liv later discussed the possibilities with each favoring someone different as the killer. So that didn’t help. Plus, Ravi was also interrupting because he had visions and so the case was going nowhere until out of nowhere Jack confessed to the crime. Jack confessed because the police were looking at his daughter for studying computer engineering. He went on to say that he studied his daughter’s textbooks for a year and that he acted when he finally believes he could get revenge. Jack came forward now because he wanted to get his daughter out of trouble and so seeing how much he loved her had gotten to Liv. It made her realize that maybe she should give her dad a chance and so she researched the best treatment facility for him. And she told him he needed to go through the program if they were to ever have a relationship.

Liv helped close a case and she’s working at having the father-daughter relationship she’s always wanted, but Ravi has been trying to reach out to kids with the Freylich disease and he didn’t remember that one disappeared. The young woman had already been approached by Blaine to cell her brains when she dies and she agreed because she wanted her family to have the money. But then she met Don E. and the two became close.

So who knows what will happen next?!?