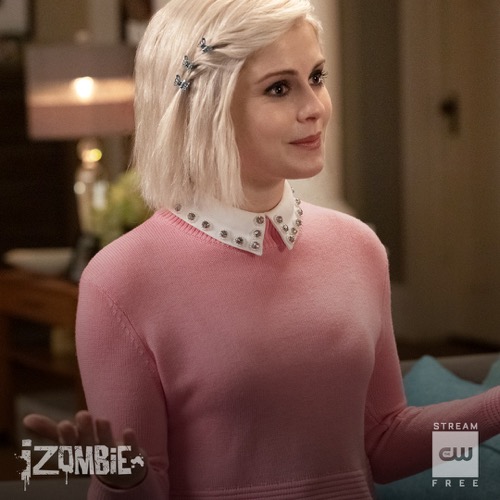 Tonight on the CW iZombie airs with an all-new Thursday, June 27, 2019, season 5 episode 9 called “The Fresh Princess” and we have your weekly iZombie recap below. On tonight’s season 5 episode 9 as per the CW, “Liv and Clive investigate the murder of Miss Teen Seattle beauty pageant contestant, Laurie-Beth Spano, who went into anaphylactic shock onstage in 1999 and ended up in a coma.

At the time, police arrested rival contender Velma Charlet for spiking Laurie-Beth’s makeup and she was given a four-year sentence. In the present day, Laurie-Beth has passed away and Clive has arrested Velma, for her murder. Velma claims to be innocent and Liv consumes Laurie-Beth’s brain in hopes of tracking down the murderer..”

Major had brought in the military and all forms of government so that they could see that zombies weren’t a threat, but then some of them were turned by extremists on their way out of town and if that wasn’t bad enough there was also an issue with the general’s daughter. Sloane Mills was supposed to be at that meeting. She gave Major her word and then she just upped and disappeared. She’s been MIA since and the only sign that Major has of her being okay is her social media posts. She was posting that she was hungover and that she was with her boyfriend. Major took those posts at face value and he never questioned if someone might have been posting as Sloane on her account.

It turns out Sloane was kidnapped by another band of extremists and she was being held captive along with her boyfriend, but as no one thinks there’s anything wrong, they haven’t been looking for her. She was gone for days and no one knew it. They had all written her off and Liv was even working a new case. She recently ate the brains of Laurie-Beth Spano. The victim had been drugged during a beauty competition in the nineties and she fell into a twenty-year coma. At the time she was drugged, the chief suspect was Velma Charlet and the young woman agreed to a plea deal. She served three years and was allowed to live her life afterward.

Then Laurie-Beth dies. This reopened the case and the police were willing to charge Velma for manslaughter, but she claims it wasn’t her. She only said it was because she didn’t want to spend the rest of her life in prison. Velma now says that she was innocent back then and so that’s why Liv had to eat the brains of someone who never left the nineties. It took her back to Spice Girls and Vision boards. It also showed her that Laurie-Beth wasn’t the intended victim. The drugs had been in the face powder and Laurie-Beth had gotten locked accidentally out of her own. She actually went into Velma’s room and used Velma’s powder.

So technically someone was trying to harm Velma and Laurie-Beth just got int the way, but the police still needed to pinpoint the exact time that the drugs were put in the powder. The person responsible hadn’t meant to kill anyone. He or she were aiming to give Velma a nasty rash and the reason it affected Laurie-Beth as it did was that she was allergic. Therefore, the true culprit must have been hanging around when Velma was onstage and so the police needed footage of the competition. They asked Laurie-Beth’s parents and luckily they have tons of footage. Laurie-Beth’s mother Gayle Spano was a pageant queen herself and so she had been very proud of her daughter.

Gayle handed over a box of videos and those came in handy. Liv saw from the footage that Laurie-Beth had messed up on her flute solo and that Velma was tied for second with another girl by the name of Elise Falcon. Falcon had been the same girl that testified that Velma was badmouthing Laurie-Beth, but Velma said that part was true and she added that Falcon had sabotaged her once before. Her tap shoes had been greased and she face-planted onstage. She knew Falcon and, when asked, Falcon admitted to sabotaging Velma that one time. She also went on to say that she didn’t try it again because what would be the point and so she offered a new suspect.

Falcon said there was another girl that was sleeping with one of the judges. She believes they might have taken over Laurie-Beth’s room for a tryst and that they wouldn’t want to be caught in their usual room because they had been caught last time. It seems Velma walked in on the scene and very shortly after that the rumors started to make their way around the circuit. Falcon knew the girl blamed Velma, but she also said she was the one that spread the rumors and so she simply watched the chaos unfold. It made Falcon bloodthirsty but it didn’t make her a killer. The police continued to look for the suspect and in the meantime, Liv dealt with some family issues.

Her father Martin had collapsed while he was getting off of the drugs and so he was staying with Liv and Peyton. The women were looking after him and they didn’t think it would get out that they were helping a junkie zombie, but then Liv’s mother Eva and brother Evan came by her place. Evan was really sick and he needed to leave Seattle. He and his mother tried the emergency leave program and they got turned down. They now needed Liv’s help to help smuggle them out of Seattle and she was willing to help them. She just didn’t think they would run into Martin. It was an awkward family reunion to say the least and Liv made sure to stick to her middle ground.

Liv didn’t take sides and she demanded that they each respect the other’s boundaries. It helped stopped a fight and so Liv being on pageant brains came in handy. Liv got her father to see that there was another side to his militarism and he got called dad for the first time, but he wasn’t going to change his mind about carving out a new path for zombies. He sort of talked about it with Liv and he got her permission to protect her if they should ever end on opposite sides. Liv returned to the case with a clean conscience and she and Liv cleared the Megan who was having sex with someone in Laurie-Beth’s room.

Only the footage did show that Gayle Spano had handed over her camera to someone else and that she had gone backstage. Gayle had panicked when Laurie-Beth messed up her solo and so she tried to give Velma a rash, but then her plane went screwy. She accidentally drugged her own daughter and unfortunately, it led to her death. Gayle confessed to what she did when she thought Velma would be blamed and nothing the police could do to her now will be worst than what she’s been doing to herself these past twenty years.

But Sloane did reappear. She was starved and then released on humans by the Dead Enders. She hadn’t been in control of herself and so she and her boyfriend began killing people. They got out of control and so Filmore Graves to reestablish peace.

They killed Sloane and now they’ve lost the general.