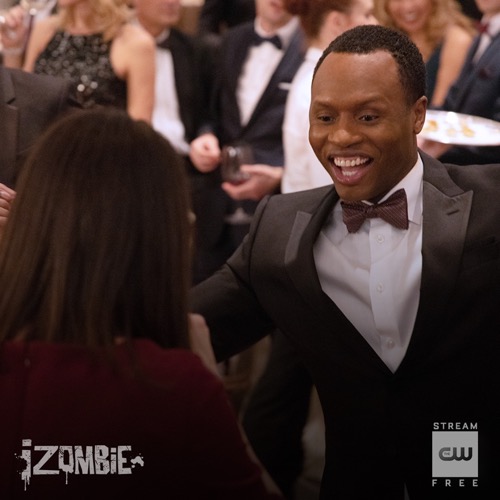 Tonight on the CW iZombie airs with an all-new Thursday, July 25, 2019, season 5 episode 12 called “Bye, Zombies” and we have your weekly iZombie recap below. On tonight’s season, 5 episode 12 as per the CW, “IZOMBIE’S PENULTIMATE EPISODE WRITTEN BY DIANE RUGGIERO-WRIGT – Liv (Rose McIver) makes a devastating discovery.”

The cure wasn’t coming. Ravi sent the tainted Utopium to Charli and Saxon, but Saxon was working with a big pharmaceutical company that was working on chronic treatment and so they didn’t want to miss out on the profits because of some cure. Saxon kicked Chari off the project and then he moved the Utopium. He was now keeping it heavily guarded in a lab that Charli couldn’t enter. Saxon was doing everything possible to stop a cure from being made and so his actions were what Liv over the edge. She told Ravi they were getting cure back one way or another. Liv planned on breaking into the CDC and stealing the Uptomium. She also realized that she and Ravi couldn’t do this on their own.

Liv had to enlist her friends for help. Clive was to help them with the security system and Major was supposed to equip them with cool gadgets as well as help them with the logistics and Peyton was there to poke holes in their plans so that they wouldn’t make a mistake. Liv and Ravi brought their friends together because they had to perform a heist and had no idea how to go about it, but none of their friends thought the two could do it. Peyton was especially skeptic. She said and the others agreed that the two were going to need an Ocean’s Eight arrangement of skills. Everyone also agreed that this couldn’t be a two-man job and so that’s when Liv reminded everyone that she and Ravi were zombies.

The two of them could always eat the brains of whoever they needed. Liv and Ravi found Russian hacker brains, acrobat brains, ninja brains, and thanks to Clive they also learned that a few of the great pickpockets were recently buried. They even got Major to help dig up the bodies. Liv and Ravi had everything they needed and more. Clive chose to come with them at the last minute and so now they were a team. Clive didn’t want Liv going into without him and he also said this could be their last hurrah because none of them were sure the plan would work. There was also the part about Liv maybe becoming human again and so this really was the last hurrah. And it didn’t hurt that Clive got to be the Clooney.

Clive wanted to be Clooney so bad that he ended up taking on more than he could handle. He realized that Liv on a pickpocket’s brains was practically dangerous when she began stealing from random people and when she snuck a necklace into his underwear. Luckily, Liv was great at multi-tasking. She grabbed what they needed and she got it to Ravi. Ravi, unfortunately, was on the Russian hacker brain. He was disinterested in being helpful and he also wanted half of the stash Liv stole from strangers. The brains they were on were truly affecting them. Ravi was even Russian when he got into the CDC and that didn’t quite work when he ran into an old one-night-stand. He had slept with her and then never called her back.

The woman naturally wanted an explanation for his behavior. Ravi didn’t have a lot of time and so he told her that she was needy. He also said she would have been more attractive if he had more confidence. He then advised her to know her worth and she even thanked for that. She said that was the first honest answer she ever received. It was only after she left that Ravi was able to do what he had to do. He used the badge they stole to hack into the computer system. He also had to rush back afterward because Clive hadn’t been keeping tabs on the mark and she almost left without her phone or her id badge. Liv had to be the one to save the day and she sneakily put everything back without the mark ever knowing.

Things were different back in Seattle. Peyton had been keeping an eye on the house and sadly Blaine used one of the kids to get in. He killed one of them to prove that he could and so Peyton had to go with him and the kids. The Freylich were being marched to the slaughter and Major couldn’t even help with this one. He was attacked by the Dead Enders. The terrorist group had gotten tactical weapons from General Mills and lucky for them he didn’t know that killed his daughter. So he gave them weapons to kill zombies. They attacked a zombie memorial and that outraged the zombie community into rioting. Major tried to put down the rioting, but that’s when the Dead Enders attacked and they weren’t able to kill him because Enzo made his move.

Enzo Lambert made himself out to be the answer to zombie kind. He also convinced Major’s men to betray him and Major had to jump into the river to escape certain death.

Enzo then took over Seattle and took over live broadcasting to show him turning one human (a Dead Ender) to Zombie, but then that made the Dead Enders proclaim its war.

It didn’t matter that the others got the cure because they needed the Max Rager to complete it and that was in Fillmore Graves… you know the place that’s now hunting down Major.