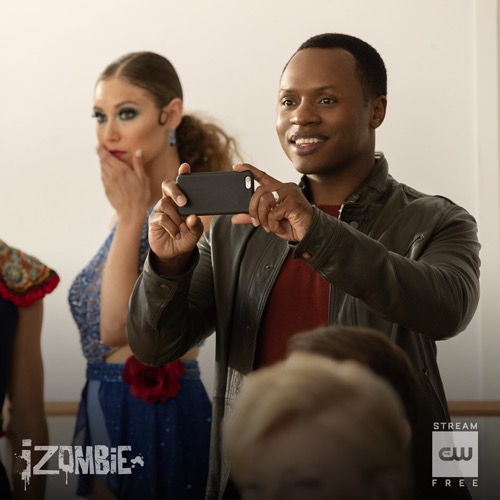 Tonight on the CW iZombie airs with an all-new Thursday, May 16, 2019, season 5 episode 3 called “Five, Six, Seven, Ate!” and we have your weekly iZombie recap below. On tonight’s season 5 episode 3 as per the CW, “While investigating the deaths of Gulliver and Nancy, the dynamic duo of Seattle’s winning dance team, Liv and Ravi go undercover as dance partners to size up the other contestants aka the prime suspects. Meanwhile, Peyton confronts Major after she’s told that one of his soldiers was out of line during a routine lice check at the school. Lastly, Clive and Bozzio (guest star Jessica Harmon) receive a shocking surprise during Lamaze class.”

A couple is dancing together in a studio. They take a break and sip on a protein drink. Within seconds, the dance partners start coughing before falling to the ground and dying.

Ravi and Liv are looking over the bodies of the dance partners. They flip for who gets which brain. At a nearby middle school, students are having their scalps checked for lice. The soldiers come in to stop it all. All hell breaks loose. Later, school officials visit Peyton to show her a video of the incident.

Back at the lab, Liv comes up with an idea. She and Ravi should pose as dancers and work the inside to see who killed the dancing couple.

Liv and Ravi plan to call each other Fred and Ginger, they explain to the head of the dance program. They meet a dance couple, Tina and Lars, in the studio, who are extremely competitive. Liv and Ravi talk quietly. They need to secretly get Tina’s phone. Meanwhile, Clive is conducting interviews with the other dancers.

Peyton visits Major. She wants his men to behave themselves. He chuckles. She hasn’t been keeping her end of the bargain. She tells him how one of his men made a comment that a middle schooler looked yummy. He gets angry. The school was doing a lice check to search for zombie kids to lock them up. Peyton doesn’t believe it.

Clive and Ava are in pregnancy class. He spots a woman he knows. After he acts strange, he admits he slept with the woman to Ava when they were broken up and now she is pregnant.

Liz and Ravi meet with the other dancers at a club to get drinks and get to know them. Liv makes Ravi dance with her. Liv has a vision. Lars was having an affair on Tina. She wants to switch brains. Tina could be the killer.

Clive bumps into the pregnant officers from the class. He awkwardly asks if the baby is his. She admits, she doesn’t know. She did make a few bad choices and slept with her ex. He asks if she wants to get a DNA test. She doesn’t, there are risks. She will tell him when the baby arrives if it is his.

Liv and Ravi argue about their needs in the lab. Ravi starts to dance. Clive walks in. Ravi freaks, he doesn’t have time for all of this. Liv tells him he will be fine. They practice their dancing together. Clive helps him with his hip moves too. Liv watches as they cha cha together. Days go by. Ravi actually gets it. They all high-five.

At the local middle school, a student is teased. Down the hall, Peyton is confronting the principle. They hear fighting and come out to see the boy being teased get angry. Peyton brings him and another to her office. Major arrives to apologize. He finds out he was right after all.

Ravi and Liv take the dance floor at their competition. Liv takes off after seeing a vision, leaving Ravi to dance alone. She looks at a photo Clive has of the internet in the case and points out a person of interest. They head to his apartment. They sit and talk with him. He takes a sip of his drink and collapses on the floor. More poison.

At pregnancy class, Ava is alone when Michelle comes in alone too, again. Ava offers to be partners. Late, Clive sees them from outside the door.

Liv lets Peyton and Major in with the orphan zombie kids at the safe house. Liv is happy to take them in.