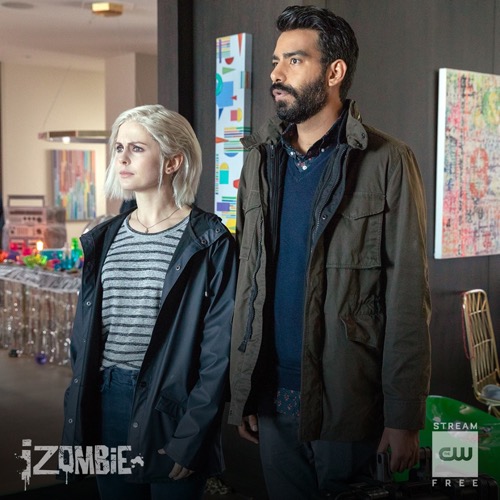 Tonight on the CW iZombie airs with an all-new Thursday, May 30, 2019, season 5 episode 5 called “Death Moves Pretty Fast” and we have your weekly iZombie recap below. On tonight’s season 5 episode 5 as per the CW, “Liv investigates the death of independently wealthy 19-year-old Harris Miller while, on brain à la Ferris Bueller, attempting to cheer up Ravi, who has been spiraling after learning some unfortunate news.

Meanwhile, after a nasty fall at the crime scene, Clive is forced to continue his part of the investigation via FaceTime. Lastly, things are suddenly going from bad to worse for Blaine.”

Some neighbors are just downright insensitive. Blaine lived next door to a young man who was independently wealthy and who also loved to party. Harris Burrows partied every night and he even blocked his neighbors’ driveway on occasion. Blaine tried to talk him about it and it ended throwing in his usual threats. He threatened to kill Harris if Harris didn’t move the car blocking his driveway, but Harris called him an old dude and then shut his door in Blaine’s face. This annoyed Blaine and later Seattle PD had to ask themselves if a parking spot was worth killing some over? The police were called to Harris’s mansion when his girlfriend came by and found his toasted to death inside of his own sauna.

Harris must have gone in there to relax and then someone locked the door from the outside. They also raised the temperature of the place too dangerous levels and so Harris really was toasted. The police would have sent someone over to Blaine’s house to question him, but Clive hurt his back when he slipped on a slippery nipple at Harris’s house and so Liv said she could go do it with Ravi. Between them, they were a brain-eating zombie and a guy who’s taken kickboxing. Liv and Ravi went over there to talk and they tried to apply some pressure. And all it did was make Blaine laugh because he said as the biggest supplier of brains, he was basically untouchable and unfortunately, he was right.

Blaine also claimed that he had an alibi. He introduced Liv and Ravi to Al Bronson who he said had stayed over the night of the murder and he had Al repeat it in front of the duo. Both Liv and Ravi were upset because they thought that was it and that Blaine couldn’t have done it, but they were later visited at the morgue. Al came by because she said she wasn’t actually a good alibi. She only stayed over because her car was blocked from leaving and so she slept in a guest room. Al doesn’t know what Blaine could have been doing and, while she was at it, she had a few questions. She overheard them telling Blaine that he killed teenagers before and she wanted the backstory. Liv and Ravi claimed they misspoke and that Blaine didn’t personally kill anyone. And they thought that had been enough for Al.

Oh, it wasn’t! Al was still curious and she grabbed a dumpling she saw on a tray because she wanted a snack, but the “snack” was brains. Liv really was an excellent chef and her food never looked like brains. It was usually these grand concoctions and so Al was going to feel some repercussions down the line. Maybe this whole thing with Blaine might have been too big for her. Al was off adjusting to brains and in the meantime Liv and Ravi pursued leads. They still thought Blaine did it and so they weren’t really looking for leads when they came across one. Harris’s best friend said that Harris’s girlfriend’s ex has been a problem lately. Jamie Ross was upset because Amy left him for Harris and so Liv and Ravi wanted to speak to Jamie about it.

They found Jamie at the high school memorial. Some of the kids came together to celebrate Harris and this gave the duo a great opportunity to cuss everyone out. They even met Lee Mooney. Mooney was the economics teacher who thought bitcoin was a scam and he went on to dare Harris to put his money where his mouth is when Harris disagreed with him. Harris invested the money he was saving to buy a car into bitcoin and then sold when it hit big. Its how he got to be so rich so quickly and so Liv asked if he felt bad about it. The teacher said he didn’t and he also credited Harris for him dropping the teacher side. He became vice principal and said he was happier. He even ignored it when Harris threw together a Mooney mimic competition.

Harris painted Mooney’s car as well. The teacher was shaping out to be the prime suspect and the jealous ex-boyfriend Jamie couldn’t have done it. Jamie was a zombie and his memory has been slipping. He’s been eating the brain tubes like everyone else and the supply was tainted. People were sneaking in bad brains and Liv and Ravi weren’t the only that suspected. Fillmore Graves came to the same conclusion when Major began losing it. Major couldn’t remember giving out orders or people’s names and so he was sidelined. He has pushed to the side and someone with more militant agenda took over. The Frenchie went on to attack protestors outside the brain plant and now it was all over the news that FG used water cannons on women and children.

There was nothing Major could do about his own situation, but Liv and Ravi came up with a plan to get to Harris’s killer. They used Harris living will and a bunch of voice recordings to pretend that he was still alive. The fake “Harris” was back on the radio and he asked his fans to share the love. His killer did when he tried to kill Harris again and almost killed Steve. Steve was okay and they figured out Harris’s best friend Ham was behind it. Ham was cut off when he helped Harris’s with a prank and he went to Harris for help. His best friend would help him pay for college, but he would spend money on parties and so Ham killed him.

Ham was going away and so was Enzo as it turns out because Major could put him on ice for leading a coup.

But the story about Freylich got out and Ravi was just devastated because he believes these kids were going to be hunted for the zombie cure.

And Al Bronson was finished with her story, she managed to collect evidence on everything that Blaine has done (which included killing the Mayor) and now he was being tried in the court of public opinion.