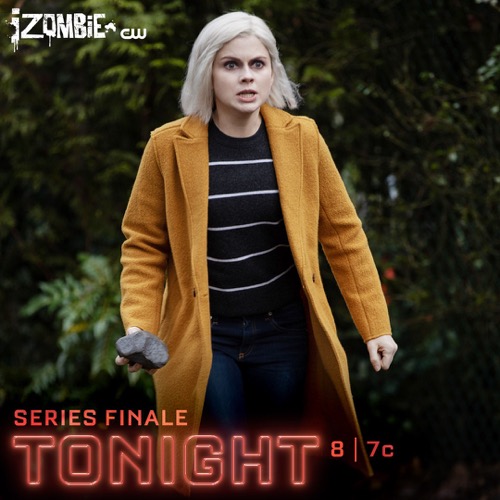 Tonight on the CW iZombie airs with an all-new Thursday, July 25, 2019, season 5 episode 13 called “All’s Well That Ends Well” and we have your weekly iZombie recap below. On tonight’s season, 5 episode 13 series finale as per the CW, “In the series finale, the human versus zombie war finally comes to a head.”

Liv, Clive, and Ravi left Atlanta. They were headed home and they even took a flight so that they could return all the quicker for Clive. Clive was in a rush to get back home to his pregnant wife. He knew there was a chance when he left Seattle that he might miss out on something, but it had still come as a surprise when his wife texted to say she was in labor. It made Clive want to get home sooner than before and the news also couldn’t come at the worst time. The others were informed that Liv was in danger. She and her friends had split up because they didn’t want to look suspicious and so she ended up sitting next to a nosy neighbor. The same neighbor that swears she’s seen Liv’s face before.

Liv tried to claim that she just has one of those faces, but the woman refused to give up. She kept coming back time and time again with another question on where she knew Liv from. The woman it seems had prided herself on being good with faces. She never forgot one and that’s why she was so sure she knew Liv from somewhere. So that’s when Liv contacted her friends. She told them she needed their help it fobbing this woman off and they came up with the solution of drugging her. Liv’s new friend had been drinking mimosas the whole flight. The others told Liv to come up with some plausible story to get her hands on the woman’s glass and that she could put the drugs in then.

Liv then took it from there. She told her neighbor that she was going to get herself one of those mimosas and she offered to get a refill for the woman. Liv took her glass to the back where she put the drug in, but then the stewardess kept filling both glasses and she did all of this with her back to Liv. Liv never saw which glass belonged to. She took a guess and luckily the guess panned out. She knocked out the woman like planned. Then the flight had a stopover and so it was good things that they had friends in high places. The stewardess recognized Liv as the zombie that cured her sister. She and her brother who was a border agent had given the team to the Washington border. And so Clive was able to make it to the birth of his child.

Only Liv and Clive came back to an empty house. The kids hadn’t been there and only a handful later showed up. They told the guys that they had been kidnapped. They were taken to a house by a man they described as Blaine and that Peyton helped them escape. The other kids were to scared to come back to the house, but that wasn’t all. Peyton was shot while they were driving away and it looked bad. None of the kids knew if Peyton was even still alive. Liv decided to see it if it was true by going over to Blaine’s and Ravi was forced to stay behind because he still had to work on the cure. He was actually coming up with a new batch when Major showed up. Major risked his life to get his hands on the Major Rager and he just barely got his hands on it.

Major had to break into Fillmore Graves. The building had been taken over by Enzo and the militants. So they wanted to kill Major for his peaceful beliefs. He tried to claim that he was upset with all the zombie deaths and that he was willing to become a soldier again, but no one believed him and they were going to turn Major into one of the mindless zombies when Major’s friends began fighting back. They cleared a path for Major to the Max Rager. Some of them died for helping him and yet none of them regretted their actions. They helping the man they knew would save the zombies. And Major help do just that when he got the Max Rager to Ravi, the same Ravi that was grieving because he thought his girlfriend was dead.

Liv even thought the same when she went to Blaine’s. Blaine was pushed down a well by Don E for having killed his fiancée and Liv then pushed Don E down there because she thought she was getting revenge for her best friend. But it turns out Peyton was still alive. She had been turned into a zombie and that didn’t matter anymore because Ravi developed the cure. He tried to get a zombie anchorman to take it in hopes of proving there was a cure except the anchorman didn’t want to play ball. He was willing to announce there was a cure while it was going to be Major that took it. Before he could take it, Enzo stormed the building and he tried to claim that there wasn’t a cure. And so Major went to him on live tv.

Major took the inexpensive cure in front of everyone. He then told Enzo that he could shoot him anywhere besides the head and he would still be dead and unfortunately Enzo took him up on it. He shot Major after he took the cure. It seemingly killed Major on live tv and then Ravi attacked Enzo. He attacked Enzo because he tricked Major. Major had taken Max Rager and Ravi injected Enzo when he attacked him. It allowed Enzo to be killed on live tv and then the studio became a free for all. Everyone began shooting because the Dead Enders showed up and one of the Dead Enders blew up the Medical Examiner’s office. The explosion happened the same time as Liv was hearing what she thought was Major’s farewell voice message…

…ten years later and the world was different. Clive was a captain now and he was a father to more than one when he adopted a child in need. Clive also took part in a live interview with both Ravi and Peyton. They talked about the Civil War of Seattle. They talked about how the war basically ended when the cure got out, but that there still a few stranglers and maybe that’s why Major went underground. The trio also claimed that Liv had been killed in the explosion.

…and the truth was actually a lot different. Major and Liv were both alive and together. They were also both zombies and they were happily raising their orphans together on Zombie Island.